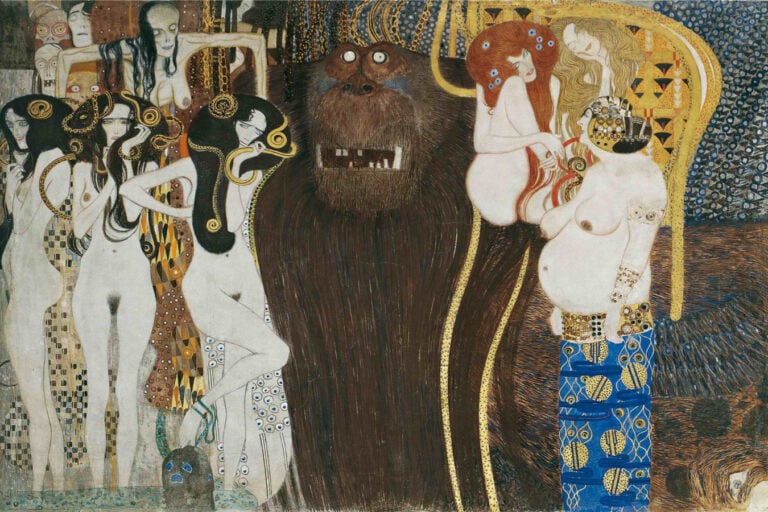 When we think of Gustav Klimt we imagine beautiful portraits of women, sensual and dangerous compositions, gold and decorative motifs. However, if you have ever been to the famous Secession building in Vienna (which is now a gallery of contemporary art), you can also think of a huge gorilla in a turban.

The gorilla is not an animal – it is a mythological giant, Typhoeus. He is a part of a large frieze called the Beethoven Frieze. It was painted in 1902 for the 14th Vienna Secessionist exhibition in celebration of the composer and featured a monumental polychrome sculpture by Max Klinger. Based on Richard Wagner’s interpretation of Beethoven’s Ninth Symphony, it marks the beginning of Gustav Klimt’s “golden period”. Meant for the exhibition only, the frieze was painted directly on the walls with light materials. It’s large, standing at 7 feet high with a width of 112 feet (2 x 34 m).

The exhibition was a sublime realization of the Gesamtkunstwerk in which the different arts – architecture, painting, sculpture and music – were united under a common theme.

After the exhibition the painting was preserved. In 1915, it was sold to a Jewish industrialist, August Lederer. Later, in 1938, much of Mr. Lederer’s art collection, including the frieze, was seized by the Nazis. Eventually it was returned to its place in 1986. In such horrible times it was a stroke of luck that the frieze survived. Here’s how the Secession building looked in 1945:

But coming back to the Frieze.

What is it about? Of course, it’s about music. It illustrates the human desire for happiness in a suffering and tempestuous world in which one contends not only with external evil forces but also with internal weaknesses. The viewer follows this journey of discovery in a stunning visual and linear fashion.

It begins gently, with the floating female Genii searching the Earth. However, it soon follows the dark, sinister-looking storm-wind giant, Typhoeus, his three Gorgon daughters, and images representing sickness, madness, death, lust, and wantonness above and to the left.

Next the knight in shining armor appears and offers hope through his own ambition and sympathy for the pleading, suffering humans. The journey ends in the discovery of joy by means of the arts, meanwhile contentment is represented in the close embrace of a kiss.

Thus, the frieze expounds psychological human yearning, ultimately satisfied through individual and communal searching and the beauty of the arts coupled with love and companionship.