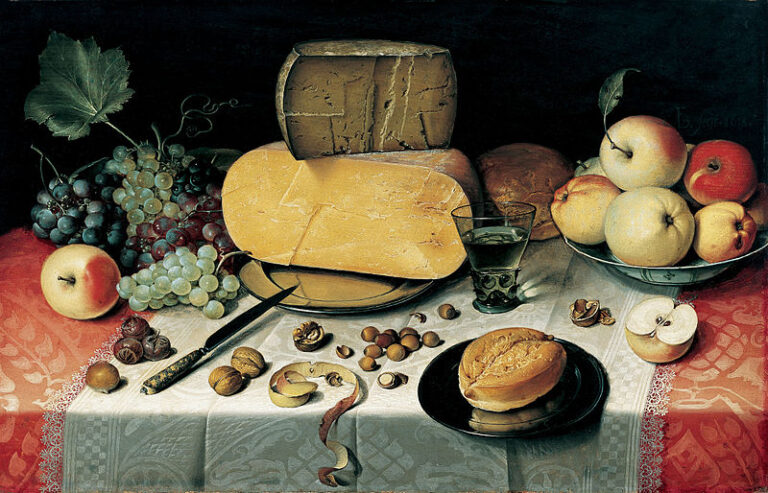 I feel ashamed. As an official cheese-lover who could eat it every day for every meal, I still haven’t dedicated a single line to cheese in painting! I must repent and compensate all cheese lovers for the lost time. This post is best enjoyed with blue cheese fondue, a cheesecake, toast with butter and cheese, some nice onion soup with cheddar, a cheese muffin, a cheeseburger, or just a piece of sheep cheese on its own…

There is no confirmed information on Clara Peeters. We’re led to believe she worked in Antwerp as one of very few female painters. Nearly all of her paintings are still lifes, a limitation imposed by contemporary culture on women who wanted to create art. If you study the side of the knife’s handle you will see Peeters’ signature. Actually, six of her known paintings include the same inscribed silver knife. Moreover, on the blade of at least three of these knives, there is a silver mark of the city of Antwerp. At Peeters’ time knives were carried by guests when they were invited to a party or were used as wedding gifts.

Here we see another variation of local and imported foods juxtaposed by Peeters. There is the same knife, some artichokes, cherries, salt, local bread – and of course the cheese!

Floris Claesz. van Dijck was a painter from Haarlem who today ranks as one of the pioneers of Dutch still-life painting. We can definitely see why: his astounding illusion of reality makes us believe that the pewter plate on the edge of the table seems close enough to touch. We can almost sense the delicacy of the damask material for the beautifully ornamented tablecloths.

We have a very similar scene here: damask tablecloths, Chinese porcelain, pewter dishes, and various foods which make this still life a “breakfast piece,” in Dutch ontbijtje. This type of still life originated around 1610 in Antwerp and Haarlem. We see the table from slightly above, which was the characteristic point of view of early still lifes, so that all the objects and their details be clearly seen.

Van Schooten began his career with enormous breakfast-pieces, filled with food and items on a table top, tilted towards the spectator and covered with rugs or white damask cloths. Later, he limited his compositions to small-scale pieces, focusing on fruit and often featuring a pewter beaker with punched decoration. He had a practice of signing his work with a small monogram, often tucked away on a knife blade or dish edge (if anyone can spot it here, let me know!). Unfortunately this has contributed to many of his pictures being attributed to others.

Joris van Son worked in Antwerp under another painter, Jan Davidsz. de Heem, one of the rare artists who captured the extent of the exuberance of Flemish Baroque painting (de Heem was Dutch so there was a difference in his painting, especially in use of color). Joris van Son successfully adopted the style of his master and created similar compositions.