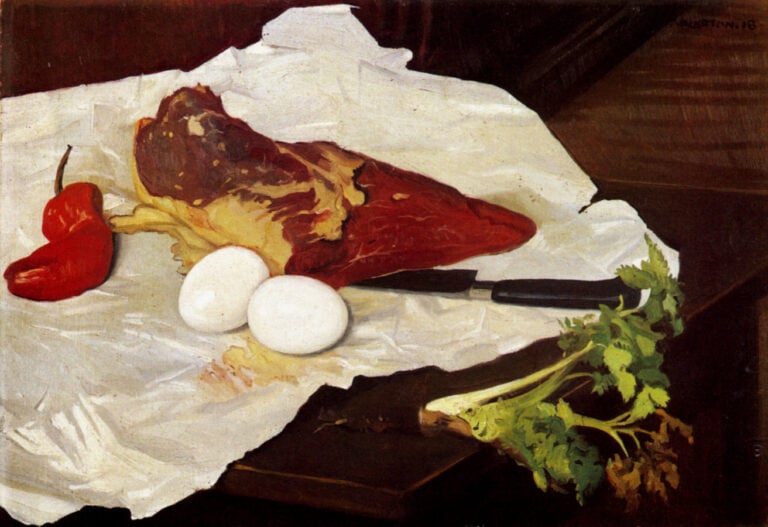 Two years ago I wrote an Easter article about eggs and what to do with all the remaining ones after the holidays. This year I decided to take up this topic again, since eggs are more than just a still life subject, they are full of symbolic meaning and, as you will see, also potential for exploration of form and ornament.

An Egg in an Egg

In the same year of completing the “Inner Vision”, Ernst published the first of his collage-novels, La Femme 100 têtes, a collection of stylistically modified late 19th-century woodblock prints which as a whole read like a Victorian melodrama with a modern twist, since each collage was accompanied by an absurd caption (e.g. “Her smile of fire will fall on the mountain sides in the form of black jelly and white rust.”).

A Circle Among Squares

In March 1916 Klee was conscripted to the reserve forces in Prussia and after finishing the training course, he was first committed as a soldier behind the front, and then to the aircraft maintenance company to perform manual work, such as executing aircraft camouflage. In 1917, he was transferred to the Royal Bavarian flying school to work as a clerk for the treasurer, which he did until the end of the war. He was granted a small room outside of the barrack block and was allowed to continue painting.

In the 1870s, Homer returned to Virginia, where he had lived during the Civil War, to get a feel of what had happened to the community post war, and how many of the former slaves, now free, were doing in the new reality. He did most of his work in oil painting, although the greatest success he achieved with water colours he had taken up by 1875.

Niko lost his room and his workshop, as he had had bad luck in trade and unfortunate love affair for which he had sacrificed all his savings. He described his life: “I am poor… My clients are not educated”, wandered around visiting dukhans- old Tbilisi restaurants – asking for a place to sleep and paint. He ended up in a dark and damp vine store, presenting his works in various dukhans where people could see them for free. Rarely did anybody value his artworks and he was known as homeless drinker rather than an artist.

A Pretext for a Play of Forms

In 1942, Schwitters saw the Lake District in England for the first time in his life. Enthralled, he moved there permanently in 1945. The following year he suffered a second stroke and was confined to bed for several weeks due to a break of the neck of the femur, which only increased his financial difficulties.

In 1939, his second daughter Mary was born. Moreover, his career speeded up, marking the beginning decade as a remarkably productive period. It was launched in 1938 with the first retrospective of his work at the George Walter Vincent Smith Gallery in Springfield, Massachusetts. In 1939, the Museum of Modern Art in New York commissioned him to make Lobster Trap and Fish Tail, a mobile to be installed in the principal stairwell of the museum’s new building on West Fifty-third Street.

An Exercise in Patience

It is a very small painting and it was painted as a gift for the Dowager Duchess of Devonshire, affectionately known as “Debo”, to celebrate their enduring friendship. Debo was the youngest of the six Mitford sisters who married Andrew Cavendish in 1941 (who became the 11th Duke of Devonshire in 1950). Why the eggs? Because Debo was famed for a somewhat eccentric passion: a passion for chickens.

Happy (and Eggy) Easter everyone!