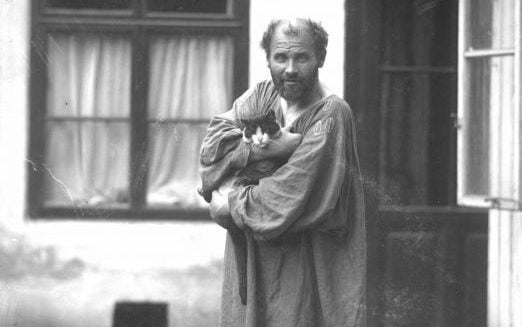 The first fact is that Gustav Klimt was the second of seven children. His mother, Anna, had an unrealized ambition to be a musical performer. His father, Ernst, was a gold engraver. Maybe this is why Klimt LOVED gold. Between 1899-1910 many of his paintings used gold leaf, we can call this the ‘golden phase’ in his artistic life. He also traveled to Venice and Ravenna and was inspired by the gold technique he saw there and the Byzantine imagery.

2. He Preferred a Cosy Style

Fact two: In casual circumstances Klimt wore sandals and a long robe with no undergarments. He had a beard, a baritone voice, burning greenish-grey eyes, and a direct manner that made plenty of women queue to be painted by him. One of them, Friederike Beer-Monti, who begged him to paint her portrait, described him as “exceptionally animal-like. His body exuded a peculiar odor. As a woman, one was really afraid of him.” But well, it didn’t matter a lot as you will read below.

3. He Was a Womanizer

Fact three: Klimt was a serial seducer. Although very sexually active, he kept his affairs discreet and thus avoided any personal scandals. After Klimt’s death, 14 legal claims for maintenance payments were made, four of which were accepted. However the artist never married, he lived quietly in an apartment with his mother and two of his sisters.

4. …But Had a Real Girlfriend

Fact four: His closest and most enduring relationship was not with one of his many lovers but with Emilie Flöge, a businesswoman and a fashion designer. Flöge pioneered the extravagant but loose-fitting Reform Movement garments which freed women from the restrictive, corset-requiring fashions of an earlier age. They exchanged 400 postcards, but none suggests anything beyond the platonic. Klimt painted Flöge several times, meanwhile her dresses appear in numerous paintings. The famous The Kiss, is thought to be an image of them as lovers.

5. He Is One of the Most Expensive Painters in the World

Final fact: Klimt’s paintings have brought some of the highest prices recorded for individual works of art. In 2006, the Portrait of Adele Bloch-Bauer I was purchased for the Neue Galerie New York by Ronald Lauder reportedly for $135 million, surpassing Picasso’s 1905 Boy With a Pipe (sold in 2004 for $104 million), as the highest reported price ever paid for a painting. This painting also has its story, presented in a recent movie Woman in Gold by Simon Curtis that tells the story of the restitution of the painting by Adele’s heirs.