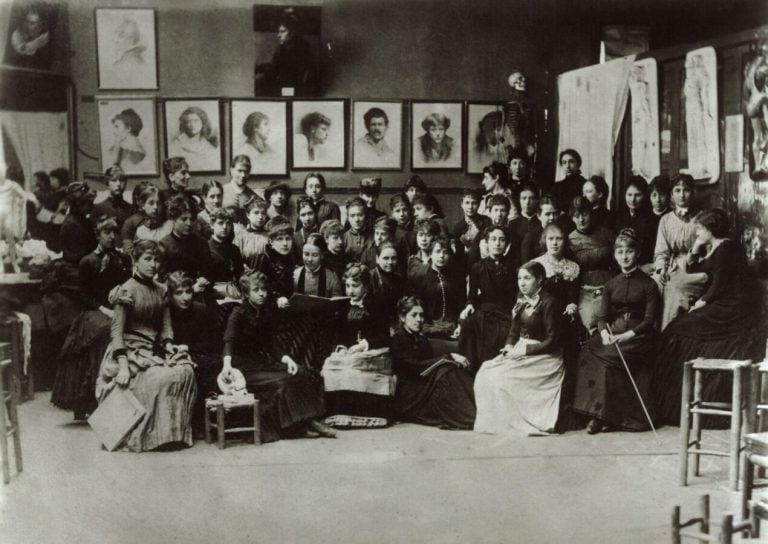 Students at the Académie Julian in Paris, c. 1885. Library of Congress.

Online Learning? Back to the Old School in Art

Have you ever wondered where the world’s most famous artists went to school? Many studied at one (or more) of these six art academies. The schools on this list have trained the most famous painters, sculptors, and architects in Western art history. Several still offer classes today. Let’s go back to school with some great artists!

Europe’s first art academy started in 16th century Italy. Up until this time, European artists had learned their craft as apprentices in established masters’ workshops. The idea of learning art and architecture in a school, therefore, was something new.

The Accademia di San Luca opened in 1593, making it Europe’s second-ever art academy. It is named after Saint Luke, the patron saint of artists. Unlike the Florentine version that preceded it, this Roman academy still serves its original function today. It began, in part, as a professional association for artists. During the Middle Ages, Europe thought of its painters and sculptors as nothing more than craftsmen. However, Renaissance artists yearned to be seen as respected intellectuals and luminaries instead. Establishing art academies like the Accademia di San Luca, which replaced the Rome’s artists trade guild, aided in this endeavor by associating art with learning rather than manual skill.

Clergyman, art collector, and royal advisor Cardinal Mazarin (1602-1661) founded Paris’ École des Beaux-Arts in 1648. As France’s national art academy, it is the most celebrated art school in Europe. École des Beaux-Arts simply means “school of fine arts”, so many French-speaking art academies carry this name. However, the term popularly refers to the Parisian school, just as Notre-Dame typically refers to the Parisian church.

Throughout its centuries-long history, art students have come from all over the world to attend the École des Beaux-Arts. Until the turn of the 20th century, it was simply the place to study if you dreamed of artistic success. Accordingly, its list of significant alumni is miles long. Name any important artist or architect since 1648, especially a French one, and he or she probably studied at the École. A special few even received the Prix de Rome, a prestigious annual scholarship to study in Rome. Recipients included Francois Boucher, Jean Honore Fragonard, Jacques-Louis David, Jean Auguste Dominique Ingres, William-Adolphe Bouguereau, and Jean-Antoine Houdon.

Between 1673 and 1885, the École des Beaux-Arts hosted its annual Salon, a massive art exhibition open to the public. Any artist could submit work to the jury for consideration, though that didn’t guarantee acceptance.

Getting art into the Salon was crucial for success. In the age before blue chip galleries and art fairs, the Paris Salon was French artists’ only real opportunity to show their work. Sales, commissions, critical acclaim, prizes, and reputation came almost exclusively from the Salon. A good showing could launch a career. Meanwhile simply having your works hung too high or low on the wall would hurt your bottom line.

Needless to say, getting rejected from the Paris Salon was devastating. However, it was also incredibly common due to the vast number of applicants. As artists flocked to Paris in the 19th century and submitted their work, the number of rejections grew and grew. To make a (very) long story as short as possible, alternative exhibitions, like the famous Salon des Refusés of 1863, sprang up to accommodate rejected artists. These new exhibition opportunities cut into the Salon’s monopoly and eventually caused its downfall. Other national art academies host influential annual exhibitions, but none ever reached the Paris Salon’s international prestige.

The École des Beaux-Arts still gives classes today, though it no longer hosts the Salon or awards the Prix de Rome.

London’s Royal Academy of Arts was founded by a charter from King George III in 1768. Ever since then, it has been England’s national art school. It is very prestigious, with its memberships highly coveted.

Since art academies can also be professional associations, some elect members who are often called academicians. Thus becoming a member of an art academy is not the same as graduating from its educational program. Rather, it is an honor bestowed upon established artists judged as worthy by the academy itself. Having attended the academy’s school is not necessary to become an academician. Membership in major art academies has historically been highly competitive, since it affords great prestige and benefits. Similar ideas exist in academies dedicated to other professions.

Prominent members of the Royal Academy have included Joshua Reynolds (its first president), Joseph Mallord William Turner, John Constable, John Everett Millais, and Angelica Kauffman. Academicians have to give an artwork to the academy upon election, so the Royal Academy of Arts boasts one incredible art collection! The Accademia di San Luca in Rome and the National Academy of Design in New York are two other examples of art academies that elect members.

The Royal Academy of Arts continues to educate artists and elect academicians to this day. It also hosts its Summer Exhibition every year. Like the Paris Salon, the Summer Exhibition was once the biggest event on the London art scene’s calendar. Though still significant, it no longer enjoys all the prestige it once did.

In 1868, French artist Rodolphe Julian (1839-1907) founded the Académie Julian as another option for art education in Paris. His academy appealed to students who wanted something different from the conservative, formal, highly competitive École des Beaux-Arts. The Académie was open to female students, who could not attend the École until 1897, and allowed them to draw from the all-important nude models.

Life at the Académie Julian was informal in atmosphere and open to new artistic ideas. It’s little surprise, then, that its alumni include Henri Matisse, Pierre Bonnard, and Marcel Duchamp. The school was also popular with Americans such as John Singer Sargent and Robert Henri. Sargent also studied at the École, as it was possible to do both. All in all, art students from more than 50 countries attended the Académie Julian before it closed in 1939.

The Slade School of Fine Art opened in 1871 as a part of the University College of London. Its name comes from British art collector Felix Slade (1788-1868), who left money in his will to establish the school. He also helped to further art education at Oxford and Cambridge. Like the Académie Julian, the Slade School was a progressive alternative to the official academy. It was more inclined towards the avant-garde and open to female artists from the very beginning.

The Académie Julian, the Slade School of Fine Art, and other alternative art academies thrived as dissatisfaction towards official academies grew. While artists wanted to innovate, the École and the Royal Academy stayed conservative and continued to prize classically-inspired Realism. This is sometimes called Academicism or academic art, or Beaux Arts architecture. Academicism felt increasingly stuffy and stagnant when compared with Impressionism, Post-Impressionism, and even newer trends in late-19th century art.

Founded in 1919 by Walter Gropius (1883-1969), the Bauhaus is perhaps the biggest household name of all art academies. It sparked an entire movement in its name, which has become synonymous with modern design. The Bauhaus included all kinds of art, design, and craft, following Gropius’s belief that every art works in harmony with the others. Departments at the Bauhaus included weaving, ceramics, metalwork, graphic art, and cabinet making. While traditional craftsmanship was clearly valued at the Bauhaus, so too were industrial design, experimentation, and innovation. However, the school’s practices and focuses evolved over its short lifetime.

The Bauhaus had three facilities throughout its 14-year history: Weimar, Dessau, and Berlin. The Nazis closed the Bauhaus in 1933, and many Bauhaus artists soon fled Germany for America.

Students at the Bauhaus came from 29 different countries. Key teachers included Paul Klee, Wasily Kandinsky, Marcel Breuer, and Ludwig Mies van der Rohe. There were also many fabulous women associated with the Bauhaus. While the school itself no longer exists, its reputation and influence have far outlasted it.

“What exactly was the Bauhaus?” Bauhaus Kooperation. Accessed 4 Sep 2020.

Hubert Robert was an immensely popular French painter from the 18th century best known for his skillful landscapes, particularly his landscapes that...

Academicism was the dominant style in European art in the 18th and 19th centuries. It was called so because it was dictated by the French Academy of...