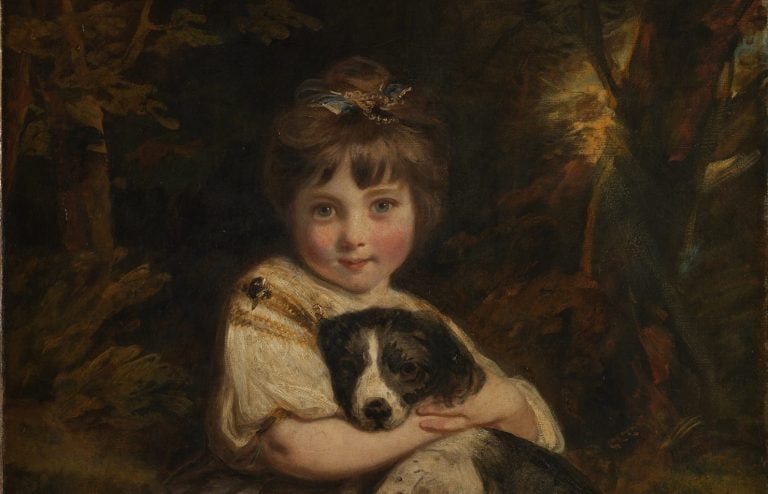 Sir Joshua Reynolds, the first president of the British Royal Academy founded in 1768, was an exemplary painter. Having traveled to Italy on his Grand Tour, he had the opportunity to study the Great Italian Masters and the ancient ruins and sculptures. Although the Academy believed that history painting, that is painting of mythological, religious, or historical subjects, was the highest in the hierarchy of genres, Reynolds is most remembered for his portraits. Today you’ll have a chance to meet children who will never grow up thanks to his brush!

This is not strictly a portrait but a so-called “fancy picture”, a character study. It is also considered one of his most famous works. Interestingly, when x-rays of it were made, it was discovered that Reynolds had repainted it many times and that he painted it over another famous fancy, A Strawberry Girl. Unfortunately, due to the Reynolds’ faulty technique, the painting already required conservation in the 19th century.

This portrait depicts two brothers, little George and older William. George, aka Beau, was an important figure in British history of fashion as he is believed to have introduced the male suit as we know it today. He was a true dandy (even from childhood, just look at this sassy pink sash!), as he wore originally knotted cravats and long trousers instead of knee-breeches. It took him five hours a day to dress and he recommended polishing boots with champagne. On top of this, he was a friend of the future King George IV.

3. My spaniel and I are best friends

Janes Bowles’ father was a landowner in Oxfordshire and an amateur painter and musician. He invited Reynolds to paint the portrait of his eldest daughter who at the time was three or four years old. She is painted in the same fashion as the first girl – a fancy-style composition with a carefree atmosphere of innocence. She’s cuddling her spaniel and seems to be a very happy girl.

4. I pray every day because I want to be a prophet when I grow up

Reynolds painted at least two versions of Samuel praying, the other one can be found in the Musée Fabre in Montpellier. Also this time Reynolds painted a fancy figure. This subject, however, is not a cute girl but a biblical prophet Samuel, whom Reynolds imagined as a small boy. Moreover, he tried to imitate Rembrandt’s style, with its brown colors and a decisive and singular light source. The atmosphere is no longer carefree but is rather imbued with spirituality and concentration.