The Great Vision of Nature: Constable and McTaggart 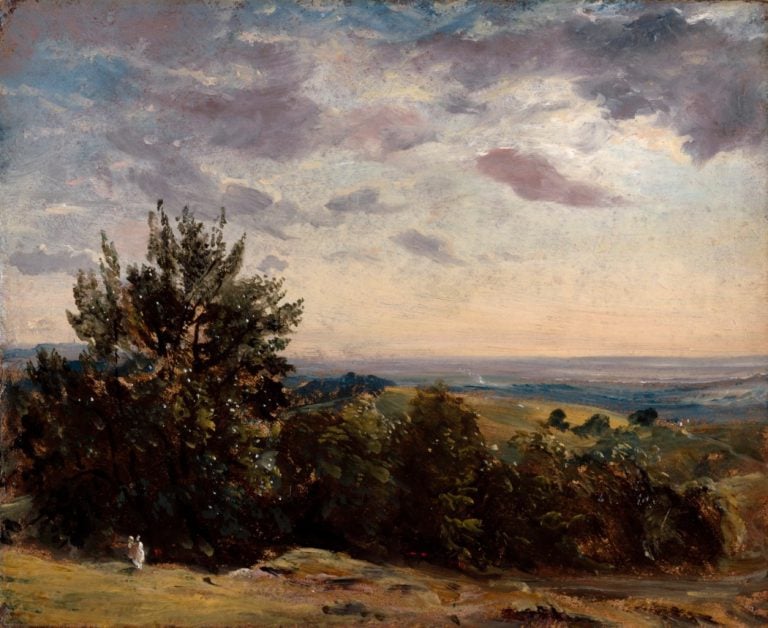 The British Landscape in Art

Kyffin Williams and the Welsh Landscape

During his lifetime, captivated by the beauty of nature, John Constable’s landscapes received mixed reviews. He thought he was never going to have his desired impact on the art world. However, Constable was unaware that his paintings were going to inspire Scotland’s most celebrated artist after his death. When the Scottish painter William McTaggart saw Constable’s Salisbury Cathedral from the Meadows at the Art Treasures exhibition in 1857, he was struck by the enormous painting. What else did these masters of landscape painting have in common?

When it was first exhibited at the Royal Academy in 1831, Salisbury Cathedral from the Meadows received a lot of criticism. The Times’ critic wrote:

“A very vigorous and masterly landscape, which someone has spoiled since painting by putting in such clouds as no human being ever saw. It is impossible that this offence can have been committed with the consent of the artist”.

The Times Magazine on Salisbury’s Cathedral from the Meadows, ca. 1831. John Constable’s Skies: A Fusion of Art and Science, John E. Thornes.

Constable started painting Salisbury Cathedral from the Meadows a year after his wife Maria’s death in 1828. The loss of her affected him deeply; ‘I shall never feel again as I have felt…’ In this turbulent landscape, faith, grief, and artistic ambition are interwoven. After putting the last brush stroke on the six-foot canvas, Constable must have felt sure it was his finest achievement. After all, he named his painting The Great Salisbury.

From early in his career, sketching nature was an essential aspect of Constable’s working practice. McTaggart also adopted the same habit. Constable’s work was a source of profound inspiration for William McTaggart throughout his career. The future ‘Father of Scottish Painting’ studied Constable’s oil sketches of seascapes and cloudy skies when they were on loan to the Edinburgh Museum of Science and Art between 1883 and 1887.

Having read Constable’s biography by C.R. Leslie, McTaggart immediately went to see his masterpiece at the Manchester exhibition. His visit sparked a lifelong inspiration of the subject of nature.

In 1890, McTaggart created his now-called national masterpiece, The Storm. The Storm is a powerful example of McTaggart’s dedication to this coastal region. McTaggart’s thunderous sky and capricious waves in The Storm are the climaxes of his lifelong study of nature. In between his energetic brushwork and bold colors, you can see a struggle to try to save a group of fishermen.

Both Constable and McTaggart deeply affiliated their paintings with particular locations. Apart from his home landscape of Suffolk, Constable painted Salisbury more than any other place. He first visited in 1811 and kept returning there many times until he died in 1837. This love for the countryside was a mutual passion for McTaggart. Although he moved to Edinburgh to attend the Trustees’ Academy, he used every opportunity to return his hometown, Kintyre. There he painted the likeness of his local community embedded in nature.

Today, both Constable and McTaggart are some of the most celebrated landscape artists. While capturing nature’s vigor, they also brought to life the relationship nature had with people.