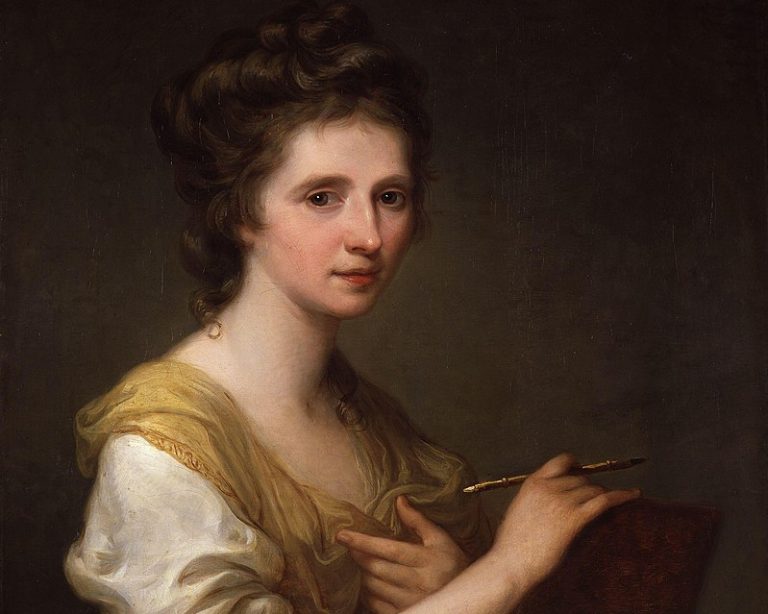 Artistic Life in the Time of the Bonapartes. Ingres at Palazzo Reale

Swiss painter Angelica Kauffman (1741-1807) was one of the greats amongst the Neoclassical artists. Through her portraits and history paintings, she became one of the most successful artists of 18th century Europe.

Angelica Kauffman was born into an artistic family, with a father who was a painter and a mother who was a musician. Kauffman was very talented in both fields. She was also intelligent, well educated, and fluent in four languages. One of her contemporaries called her “possibly the most cultivated woman in Europe”. Kauffman learned the art of painting from her father. In an era where serious artistic training was largely unavailable to women, having an artist as a family member was a huge advantage.

As her father’s assistant, the young Angelica traveled around Europe, experiencing great artworks, meeting important people, and learning on the job. Although she started out by contributing to her father’s projects, she received her first independent commission for a portrait while in her early teens.

Kauffman worked in Rome for several years before moving to London in 1766. She lived in England for 15 years and achieved her greatest success there.

Angelica Kauffman specialized in the prestigious genre of history painting. History paintings depict important, dramatic events from history, literature, mythology, and the Bible. They tend to be very large and feature many figures in poses and costumes inspired by classical antiquity. For many centuries, history painting was by far the most celebrated artistic genre in Europe.

Most 18th century women didn’t pursue history painting. This was partially because it was considered too large and ambitious, but also because it required a keen understanding of human anatomy. This could only really be achieved through the study of the male nude, which was forbidden to women. Kauffman had to learn anatomy from studying plaster casts of important statues instead. However, she pursued history painting anyway. She was the only female of her time to do so, and she was very successful at it. Her history paintings primarily depict episodes from classical antiquity and often include elegant female figures.

Portraits and Self Portraits

In addition to her great history paintings, Kauffman was a very successful portrait painter who was always in high demand for commissions. She was popular among the English nobility and other British luminaries, such as the great painter Sir Joshua Reynolds (who was Kauffman’s close friend), actor David Garrick, and Lady Emma Hamilton. In my opinion, her most interesting portraits are those depicting female sitters as personifications of mythological figures. The portrait illustrated above shows English singer Sarah Harrop, fittingly, as a muse of music.

Kauffman also painted many self-portraits, often representing herself as various allegorical figures. In her Self-Portrait Hesitating Between the Arts of Music and Painting (below) from 1791, Kauffman commemorated her youthful struggle to decide between her two passions.

Angelica Kauffman and the Royal Academy

The Royal Academy of Arts, founded in 1768 in London, is Britain’s premier fine art organization. Membership has always been a great honor, and Angelica Kauffman was one of the Royal Academy’s 34 founding members. One other female artist, Mary Moser, was also in this inaugural class. However, it would take until the 20th century for the Academy to admit another woman. In 1780, the Royal Academy chose Kauffman to create four paintings based on the principles of art for the ceiling of the Academy’s premises at Somerset House.

Angelica Kauffman commanded great respect in the 18th century art world through her impressive history paintings, sought-after portraits, and membership of the Royal Academy. She was also an astute businesswoman. After she left London in 1781, she established a successful and productive studio in Rome. It became a favorite destination for both resident intellectuals and art lovers visiting Rome on the grand tour. Because she was respected for her intellect, she also became friends with many of the era’s leading thinkers. When she died in 1807, the great Italian Neoclassical sculptor Antonio Canova organized her elaborate funeral, basing it upon the funeral of the great Italian Renaissance painter, Raphael.

Greenberger, Alex, “Angelica Kauffman Was One of 18th-Century Europe’s Most Famous Portraitists, But She Was Nearly Forgotten” ArtNet News, 6 May 2020. Accessed 9 Dec 2021.

Circe is one of the fascinating characters in Homer’s epic poem the Odyssey. Due to her complex and unconventional nature, many painters have...

Antonio Canova was considered the greatest sculptor of his time. His sculptures fall into three categories: heroic compositions, compositions of...