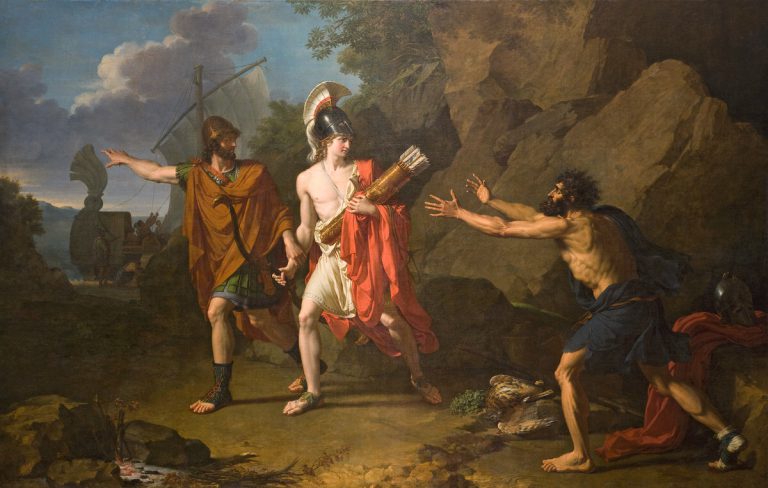 How would you feel if your friends abandoned you on an uninhabited island with a limited amount of food and no shelter just because you were injured? An island where wild animals lurk at night. The only things you have are a bow, ripped old clothes, and perpetual loneliness. On a regular day, the only sound you hear would be the huge waves crashing against rocks along the shore. However, after ten years of suffering, one morning, you hear something different than you are used to. Some of your “friends” are back! They came for you, but for what, you might ask. Well, this is what we are going to discover from Philoctetes’ perspective! Let’s delve into the famous paintings of the legendary Greek hero while learning about his story which Sophocles brought to the limelight.

“Poor soul, who for ten whole years with no wine to warm him, never sipping from the cup-brim, ever thirsty seeking after a stagnant puddle-water.”

How it all began?

Philoctetes was an Achaean hero who possessed the legendary bow and arrows of the divinely born Heracles himself. According to ancient literary sources, Philoctetes helped Heracles, who was suffering because of the tunic that the centaur, Nessus, made. By lighting the funerary pyre of Heracles and ending his pain, Philoctetes was gifted this unmatched weapon: a bow that never misses its target. With it, our hero became one of the most skilled archers. Naturally, when Helen of Sparta and Paris lit the fire that sparked the Trojan War, the Atreus brothers wished to take advantage of Philoctetes’ presence on the battlefield. Yet, their plan did not go the way they desired.

While they were crossing the Aegean Sea, an unfortunate event occurred. The Greeks stopped at Chryse island, a much smaller island very close to Lemnos. According to Greek geographer Pausanias, the island does not exist anymore because at some point it was swallowed by enormous waves and was buried deep beneath the Aegean sea. On this small island, a serpent bit Philoctetes’s leg near a shrine dedicated to the nymph, Chyrse. Whether this incident occurred because our hero somehow offended the deity or merely was in the wrong place at the wrong time, it’s undeniable that this bite shaped his fate.

“But Philoctetes stayed behind on Lemnos, the sacred island, in horrific pain, abandoned. Achaea’s sons had left him there in agony, wounded by a snake bite. He lay there in torment.”

This is how Homer describes what happened in Iliad. Now, let’s observe the paintings and continue learning what happened afterwards!

Nicolai Abraham Abildgaard was a painter, sculptor, and architect who lived in the 18th century. He was also a professor at the New Danish Academy of Art, where he gave lectures on painting, anatomy, and mythology. Expectedly, his passion for ancients myths and legends directly reflected upon his pieces. Neoclassicism became the major art movement that determined the subjects and their manner which he portrayed.

In this painting, we see how Abilgaard’s extensive knowledge regarding mythology and human anatomy excels. It seems that the setting is the island of Lemnos rather than Chryse because Philoctetes is alone and the serpent which bit him is absent in the composition as well as the shrine it guarded. Therefore, we see Philoctetes after he was abandoned due to his condition. It is one of his painful relapses which was caused by the bite. While he holds both his foot and knee, every muscle of his body is in a contracted state.

Abilgaard masterfully showcased the subject’s suffering body by applying an emphasized lighting technique. One can feel Philoctetes’ agony from his facial expression as well. Lastly, we see his most precocious possession, which for 10 years became his only companion that helped him stay alive: the bow of Heracles.

Philoctetes on the Island of Lemnos

Do you notice how gloomy the island itself is? This is certainly not a landscape you envision when you think of a Greek island, right? In this instance, the environmental state of the island reflects the mental and emotional predicament of Philoctetes. His loneliness, hunger, and pain are being conveyed to us by nature’s elements. The hollow tree, thorny plants, lifeless rocks, the greyish-black sky, and murky sea; all these constitute an emblematic window to his mind.

Guillaume Guillion Lethière is another Neoclassicist painter who was born in the 18th century. In his painting, we see Philoctetes in the middle of hunting with his legendary bow. He is trying to reach the stork that he just shot, but his condition causes him great difficulty. The bandage on Philoctetes’ bitten foot is Lethière’s way of pointing out and conveying the reason why our hero is on his knee. There is also another thing the painter is trying to tell us: Philoctetes never surrenders to the unfortunate course of his fate. He spent years by himself on this island with a serious condition, yet he strived to stay alive. He never gave up.

Jean Germain Drouais was a French painter who lived in the 18th century. He was greatly influenced by historical and classical themes and there was a good reason for that. His mentor was the legendary Jacques Louis David himself, who created timeless paintings in Neoclassical style. Drouais was one of his earliest students when David opened his painting school in Paris.

Various aspects make this piece important. It is actually Drouais’ last painting, which he created the year he died. Therefore, what we are seeing here is the final artistic and aesthetic extent of Drouais’ career. If we compare this painting with the two we just observed above, the first detail that will strike you is the overall manner of Philoctetes. We do not see a man who is hopeless and needs help. Instead, Drouais’s portrayal of Philoctetes is heroic and fearless.

His posture is calm and strong. His beard and hair are well-groomed and clean. The only thing he is wearing is a red robe, which symbolizes his braveness and daring aspects of his character. His determined facial expression demonstrates that he is a character who can overcome anything. The fact that the painter portrayed his eyes as entirely white is open to interpretation. By doing this, Drouais might have been trying to give him a semi-divine attribute for what Philoctetes accomplished.

Odysseus and Neoptolemus take Heracles’ bow and arrows from Philoctetes

Helenus, the Trojan Prophet who was held hostage by the Greeks, stated that the Greeks can only capture Ilion if they possess this divine weapon. After hearing this prophecy, cunning Odysseus and Neoptolemus, the son of Achilles, sailed to Lemnos without delay to retrieve the legendary bow and arrows by trickery. When they set a foot on the island, Odysseus instructed Neoptolemus that he should approach Philoctetes alone and lie to him to create an opening to take the bow. He successfully acquired it by telling Philoctetes that he hates the Greek Atreus brothers as well as Odysseus and wishes to go back home. Yet, his conscience did not let this deceitful act continue for long.

French painter François Xavier Fabre was one of Jacques Louis David’s pupils, just like Drouais. In this painting, he beautifully captured the dilemma of Neoptolemus, a man who was stuck in between. In the play, he says, “Ay me, what shall I do? I wish I’d never sailed from Scyros: this dilemma pierces me so painfully.” On one hand, there was an enormous ongoing war at the gates of Troy where his father and his people were fighting and needed this bow. On the other hand, there was a man who was treated unjustly and abandoned on an island for ten long years where, without this bow, he wouldn’t be able to survive.

Neoptolemus was able to acquire the bow and arrows, but his mind was stuck on the state of Philoctetes. His posture and facial expression vividly demonstrate his hesitancy. Meanwhile, Odysseus is pulling Neoptolemus’ hand, for he realized that the young warrior had a change of heart.

Philoctetes aiming the bow of Hercules at Odysseus

“Everything stirs up disgust when someone abandons his better nature, and behaves untrue to self.”

At last, our young Neoptolemus decided to listen to his heart. He disregarded his soldierly duty and handed the bow to his legitimate owner, Philoctetes. However, Odysseus was not going to give up that easily. What we see here is his last attempt to retrieve the bow.

This beautiful watercolour was created by Danish-German painter Asmus Jacob Carstens, an artist who rarely painted in oil. Philoctetes is ready to kill Odysseus, but Neoptolemus is holding the arrow to prevent any harm for both parties, even though he does not agree with Odysseus. We see Odysseus in a proud posture where he gives an order in the name of the Atreus brothers. His military equipment and garments illustriously stand out, while Philoctetes has nothing but a rugged robe and his bow.

It is a prominent moment where the opposites with entirely different virtues and skills clash. On one side, we have Odysseus: a cunning, pragmatic and loyal commander who follows his orders no matter what. On the other side, we have an abandoned soldier with his crippled foot and humble appearance, who lacked even the basic need for ten years but remained determined and true to himself.

Within this moment of confrontation, Neoptolemus comes forward as the power that brings balance. He prevents Philoctetes from shooting the arrow. Right after this act which Cartens painted here, Odysseus runs away, since he realizes that Neoptolemus would not be able to calm him longer. At last, Philoctetes was happy that Neoptolemus sided with him and they agreed to depart from Lemnos together. Yet, a divine intervention was on its way to change the mind of Philoctetes and alter his route to the war in Asia Minor.

Which divine hero do you think would be able to convince our old stubborn Philoctetes? I think you know the answer, dear reader.