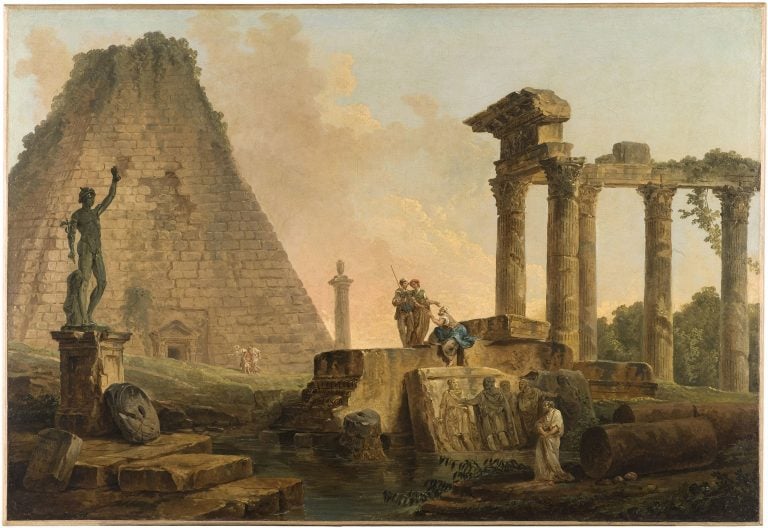 The Allure of Ruins — Architectural Decay in Art

Hubert Robert was an immensely popular French painter from the 18th century best known for his skillful landscapes, particularly his landscapes that featured architectural capricci. He had an incredible talent for highlighting the magnificence of classical ruins interposed into both Italian and French landscapes and created a large body of artworks over his lifetime illustrating this mesmerizing theme.

Hubert Robert (1733-1808) received formal art instruction as a result of sponsorship by the Choiseul family, an aristocratic family from Champagne, France. Robert’s father was in the employ of François-Joseph de Choiseul, the marquis de Stainville. This elite acquaintance exposed the young Robert to the customs and lifestyle of the upper classes, and the connections with people in influential positions of nobility, clergy, diplomacy, and government from a young age were instrumental in placing him in favorable positions that led to generous patronage and commissions throughout his career.

At the age of 21, Robert set off for Italy to fulfill his ambition of studying ancient Roman architecture. Robert was accepted into the French Academy in Rome and embedded himself into prestigious art circles of the time. He developed a friendship with two other French expatriate artists, Jean-Honoré Fragonard and Jean-Claude Richard de Saint-Non, often known as Abbé de Saint-Non, and the three traveled through southern Italy cataloging the Italian countryside on canvas. Robert developed a great appreciation for the grand architecture left behind by the ancient Roman Empire and his time in Rome resulted in a significant body of drawings that he would continue to reference for years after returning to France.

In Rome, Robert acquired two significant mentors, Giovanni Paolo Panini and Giovanni Battista Piranesi. Panini was renowned for his architectural capricci, breathtaking paintings that highlighted architecture, and contained a truly astonishing amount of detail in one unified composition. Under the guidance of Panini, Robert developed his own signature style of capricci for which he became well-known.

Robert’s second significant mentor was Giovanni Battista Piranesi, an archeologist, architect, and artist, famous for his etchings of Rome. Piranesi’s influence is quite evident in Robert’s paintings. The artist inherited Piranesi’s style of heightening the monumentality of the architectural structures by lowering the viewer’s focus, and by the inclusion of minute human figures for comparison.

Robert returned to France in July 1765 at the age of 32 and in the years that followed submitted a capriccio titled Port of Ripetta, Rome as his admission piece to the Académie Royale de Peintre et de Sculpture in Paris. This painting was so well-received that he was granted a rare and expedited full membership at the associate level in the same session. This was an impressive feat as it was typically a multi-step process that took several years to attain. Robert debuted 12 pieces in the Paris Salon of 1767 and continued to present his works at the Salon until 1798.

Robert enjoyed great commercial success and maintained a comfortable living during his lifetime. He frequently received commissions from royalty and wealthy French aristocrats and even gained great popularity among members of Russian aristocracy, including Catherine II, Empress of Russia.

Hubert Robert remained in France through many key moments in French history, including the end of the monarchy, the French Revolution, and the beginning of the Napoleonic regime. His ties to aristocracy resulted in his arrest in October 1793 and internment, first for three months in Saint-Pélagie, and thereafter for six months in Saint-Lazare. Robert was, however, provided with art supplies and produced a large body of work even during his incarceration. He was released in August 1794 and remained in Paris for the rest of his life until 1808.

Robert’s keen eye for detail and organization was also utilized in pursuits outside of painting. He was a prolific draftsman, printmaker, interior decorator, and a skilled landscape designer. Robert served as a curator and collector for the Louvre Museum in Paris and was intimately involved in the management of exhibition spaces and planned significant renovations during his service.

A typical landscape by Hubert Robert was depicted in tones of brown and grey. He distorted the proportions of architectural ruins to highlight their majesty and overwhelmed the composition, alluding to their importance in Robert’s narrative. Juxtaposed with the aggrandized architectural elements, Robert depicted minute, almost insignificant figurative elements scattered across his paintings. These figures were generally placed in the foreground and appeared engaged in activities and interactions that ranged from mundane to highly invigorated. Robert depicted them dressed in both modern and classical attire.

The architectural details included were almost necessarily in a state of decay and frequently depicted being consumed by nature with weeds or overgrown roots. The unkempt vegetation weaving through the decaying architecture served to convey and animate the deterioration of the architecture. The presence of life, both in form of human figures and vegetation, appears to breathe life into these grand relics of the past, coexisting with them as well as repurposing them. Despite their minute stature in comparison with the rest of the composition, the presence of life and activity serves as a foreboding reminder of the inevitable passage of time.

The Allure of Ruins

This incredible vision of Robert, combined with his Italian experience, resulted in a large and distinctive body of works that he produced for a large portion of his professional career. Impressed by Robert’s submissions to the Paris Salon of 1767, French philosopher, encyclopedist, and art critic, Denis Diderot coined the phrase “Robert des Ruines,” or “Robert of the Ruins.”

The ideas ruins evoke in me are grand. Everything comes to nothing, everything perishes, everything passes, only the world remains, only time endures. How old is this world! I walk between two eternities.

Have you ever wondered where the world’s most famous artists went to school? Many studied at one (or more) of these six art academies. The schools...

Academicism was the dominant style in European art in the 18th and 19th centuries. It was called so because it was dictated by the French Academy of...