Imperial War Museum North © IWM0060 Jason Lawton[/caption] In the original Vorticist manifesto of 1913, Lewis placed his name alongside a group of artists that included William Roberts, Henri Gaudier Brzeska, Edward Wadsworth, Jessica Dismore and Helen Sanders.  With a name inspired by the poet, Ezra Pound, a new art movement to rival the Futurists in Italy exploded onto the British Art scene: Vorticism. But who was this man who antagonised all that he came up against?   Of himself,  Wyndham Lewis (he dropped his first name, early on in his career) said: I have been called a Rogue Elephant, a Cannibal Shark, and a crocodile. I am none the worse. I remain a caged, and rather sardonic, lion, in a particularly contemptible and ill-run zoo.

Wyndham Lewis by George Charles Bereford, 1929, 6536 © National Portrait Gallery[/caption] In his biography, Lewis’s details of his birth varied depending on who he was talking to. Allegedly born in a yacht off the Nova Scotia coastline in 1882, the reality appeared to be that he was born on land. His father, an American who fought on the Union side in the American Civil War and his mother, an Englishwoman, separated when Lewis was 11 and he was sent to preparatory school in Rugby. Lewis studied at the Slade School of Art in London from 1898 and was contemporary with the likes of Augustus John and William Rothenstein. Three years later, Lewis moved to Paris where on discovering cubism and expressionism, his interest turned toward creating a new art form that eventually became Vorticism. In a move typical of Lewis’s arrogance, the claim that he, and he alone invented Vorticism is not surprising.  His abrasive personality meant that he rarely kept friendships and collaborations going for any length of time.  A founder of the Camden Town Group in 1911,  Lewis exhibited at Roger Fry’s Post-Impressionist Exhibition of 1912 which brought him into the Omega Workshop.  Later, Lewis fell out with Fry and the rest of the Omega group and it was at this point that he began the Rebel Art Group with artist and financial backer, Kate Lechmere and other artists who then formed the core of the Vorticist movement. Kate Lechmere was more than a muse and partner; the two were romantically involved until Kate met the philosopher and critic, TE Hulme, a bluff, physically intimidating Yorkshire man to whom Lechmere was quickly engaged.  Lechmere tells the story of an argument she had with Lewis over Hulme and how Lewis went racing off to confront his love rival. Unfortunately for Lewis, Hulme was physically stronger and ended by hanging Lewis upside down off some tall iron railings. The 1912 painting of Lechmere, entitled ‘Smiling Woman Ascending a Stair’ shows Lewis’s cubist leanings to good effect. The figure is explored through geometric shapes and we can recognise the deep grin of the figure from other works by Lewis. For Lewis, it was Lechmere’s outstanding feature.  In a Daily Mail interview, Lewis said of the work: That picture is a Laugh though rather a staid and traditional explosion.  The body is a pedestal for the laugh. [caption id="attachment_7579" align="aligncenter" width="341"] 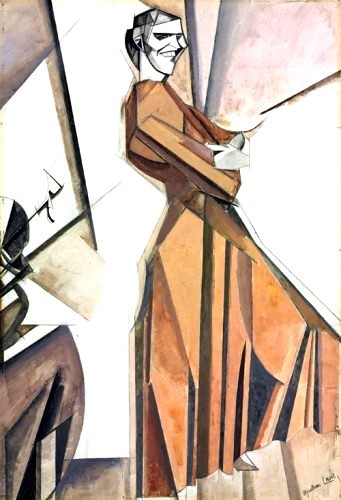 Smiling Woman Ascending a Stair, c. 1911-1912, Private Collection[/caption] In December of 1913, the Futurist leader, Marinetti met Lewis and it was from this moment that Lewis and his fellow artists embraced modernity and the machine age within their art., albeit with a British twist.  Like the Futurists, this new movement delivered a manifesto in which they stated their desire to reject the romanticism of a bygone age, and instead, celebrate the “the forms of machinery, Factories, new and vaster buildings, bridges and works”.

The Crowd, 1914-1915, Tate © The Wyndham Lewis Memorial Trust / Bridgeman Images[/caption]   In this, his first Vorticist canvas from 1915 entitled The Crowd, Lewis reduces the cityscape of factories and office blocks to a schematic in which basic pictorial representation of tiny, red workers congregate, pushing against one another, filling spaces, creating the mass of workers that the new factories were churning out. Two sets of figures carry differing flags, perhaps signifying the warring political parties. As Lewis originally named this painting, Revolution, it is entirely possible interpretation.

Wyndham Lewis by George Charles Bereford, 1917, 6534 © National Portrait Gallery[/caption] The war that has been desired by the Futurists finally erupted onto the world’s stage on Sunday 4th August 1914. In the Vorticist magazine, BLAST,  Lewis and his fellow Vorticists called for elements of our society to be ‘blasted’, while others were to be blessed. This did not stop Lewis from being a part of this ‘war to end all wars’ and he enlisted in 1916 as a gunner and then as a bombardier in the Garrison Artillery, arriving at the battlefields of France in 1917, where, after the Ypres campaign, Lewis became one of the official war artists.   [caption id="attachment_7577" align="aligncenter" width="620"]

A Battery Shelled , 1919, Wyndham Lewis © IWM Art.IWM ART 2747[/caption] Lewis painted for both the National Gallery of Canada and also for the British, with A Battery Shelled of 1919, being his most famous work. In the 1992 catalogue for Art and War, Angela Weight, Keeper, Department of Art wrote about the figures that Lewis drew in his war painting: “The iron-muscled figures in his First World War drawings strive fiercely at their tasks, pulling, dragging, plotting, surveying, laying, digging, loading, firing while explosions erupt all around.”  The officers watch as the insect-like lower ranks enact all of these actions.  The reduced form of the soldiers can almost be connected to the actors in The Crowd; ordinary, faceless workers being conscripted into the faceless army desperately fighting a recognised enemy. The landscape is being destroyed as we and the three army personnel look on; their calm stance contrasting with the business of the soldiers working through these horrific circumstances. However, Lewis is not sentimental in his depiction; here is a man who observes and comments but does not allow himself to be influenced by the emotional response that other artists used at this time. Throughout his career, Wyndham Lewis continued to challenge and argue his way through the decades of change. His unflattering portraits and his metaphysical canvases remained a passion.  Even when he was losing his sight due to a tumour, Lewis continued to show you what a grand visual legacy a man can be responsible for if he submits himself to a proper training at the start, and is not driven about by Wars and otherwise interfered with.

Recently I showed you views of typical wintery Russia by Korovin, which you can see here. Today we'll see instead something out-of-ordinary. Although...

What’s your favorite color? Why? Have you ever tried getting to know someone better by asking this question? It can fill an awkward silence in...

Pablo Picasso painted his first works during the early years of his life. According to his mother, his first words were “piz, piz”, a...