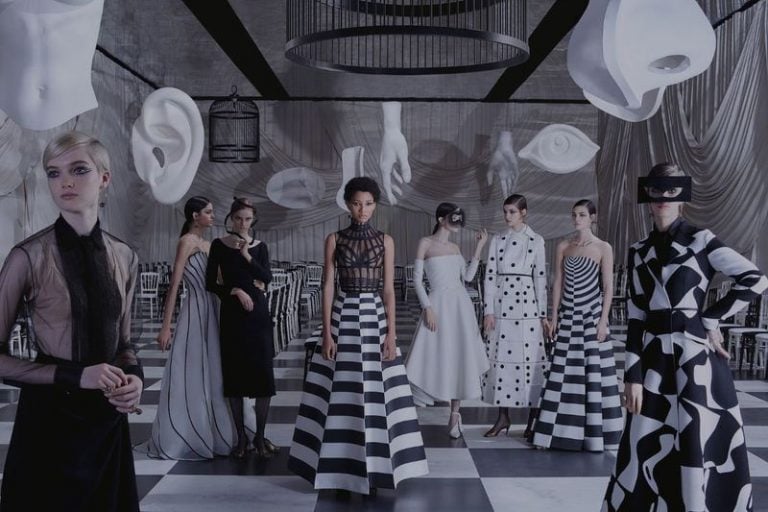 Feminism that entered the public debate a few decades ago has influenced many aspects of our culture. One of these is fashion. Many designers have embraced female empowerment and diversity in many ways. One of the strongest manifestations of this was the SS 2018 Dior show by Maria Grazia Chiuri. It was breathtaking! The haute couture of the Christian Dior brand mixed with Surrealist women artists to form a majestic live exhibition at Musée Rodin in Paris, France.

When Maria Grazia Chiuri was announced as the creative director of Dior in 2016, she became the first woman to take this place. From the very beginning, she used her position to benefit feminist means. For example, her very first show included a t-shirt with the name of Chimamanda Ngozi Adichie’s essay, We Should All Be Feminists. In the SS 2018 ready-to-wear collection, Chiuri started the show with a model wearing a black and white striped t-shirt. This one had the title of another feminist essay, Why There Have Been No Great Women Artists, by feminist art historian Linda Nochlin (about which you can read here).

Chiuri herself answered the question she posed. The following show for SS 2018 couture was a tribute to great Surrealist women artists. While Surrealism was often considered a misogynistic environment, conversely it gave recognition to many female artists. Besides, the Surrealists were interested in fashion. Let’s not forget Salvador Dali’s numerous illustrations and covers for Vogue, as well as his related collaboration with Elsa Schiaparelli.

The collection is an homage to the Surrealist’s eccentric and obscure realm. It features checkerboard floors, stucco-coated drapes, and plaster-cast extremities. However, everything is subtler and shows the position of women within the art.

The key reference of the show was the artist Leonor Fini (1907-1996). She was a friend of Christian Dior. She often wore his designs and also had her first exhibition in the gallery run by Dior himself. Fini was an Argentinian Surrealist artist, raised in Trieste, Italy. In 1931 or 1932 she moved to Paris to make her fortune as an artist. Rebellious as a person, she soon became friends with all the avant-garde artists of the time: Giorgio de Chirico, Salvador Dali, Max Ernst, Pablo Picasso, and many others.

Fini never received any formal education in art, although she was familiar with Rennaisance and Mannerist styles. Her works have bright colors and they are very powerful. One can see that her pieces don’t always fit the Surrealist standards. She explored the concept of the femme fatale, but without the monstrous touch to it. However, she repeatedly used specific symbols like sphinxes, witches, and werewolves. Specifically, the sphinx represents protection and kindness, contrasting its male Surrealist concept of aggressiveness.

Lee Miller (1907-1977) was an American photographer and photojournalist. Sometimes she posed for American Vogue. In 1929 she moved to Paris and became an apprentice to Man Ray. They later became lovers and collaborators. Moreover, Miller was the one who developed the technique of solarization by introducing light into the darkroom while a set of negatives was in the developing process. She also quickly became friends with Pablo Picasso and Jean Cocteau. the latter featured Miller in his 1930 avant-garde film Le Sang d’un Poète. Her influence on the artistic circles of the time was so great that Christian Dior even named a dress after her.

What’s more, Miller gained the reputation of a fierce woman when she became a war correspondent for American Vogue during  World War II. She covered events such as the London Blitz, the liberation of Paris, and the concentration camps of Buchenwald and Dachau.

Meret Oppenheim (1913-1985) was a Swiss born in Berlin. Besides working as an artist, she also posed as a model for Man Ray. Oppenheim became widely known for her sculpture Object (Breakfast in Fur) she created in 1936. It became a token of Surrealism. The sculpture was made of a cup, a saucer, and a teaspoon covered in fur. Other than the impracticality of the object, it also depicted female sexuality.

Oppenheim drew inspiration from her dreams and Carl Jung’s writings, who was a family friend. She took everyday objects and then twisted them in a surrealistic way, broaching both femininity and female exploitation by men.

There was another sculpture called Ma Gouvernante (My Nurse or Mein Kindermädchen) made of a pair of white heels trussed-up like a turkey. In reality, it symbolized a naked female body, bound and exploited by a man. The piece was so intense that a woman from the audience tried to destroy it in the exhibition in 1936.

Dora Maar (1907-1997) was one of the most distinctive artists of the Surrealist movement. She created photomontage pieces in silver gelatin. In them, she disembodied human parts, like hands and faces, that came out of seashells and webs.

It was the artist’s role as a Cubist muse that inspired Chiuri to design dresses with abstract patchwork, as well as floating and metal masks, cut from Maar’s photographic creations.

Dorothea Tanning (1910-2012) was an American painter, sculptor, and writer based in New York. She was originally a commercial artist but discovered Surrealism at the Museum of Modern Art 1936 show called Fantastic Art, Dada and Surrealism. This was also the exhibition where Oppenheim’s Object was displayed and purchased by the museum (one of its first acquisitions). In 1942, she met her future husband, Max Ernst, who was fascinated by her self-portrait Birthday.

The dress she wears in this painting is a fantastic Renaissance costume. At first, the dress seems to be made of feathers, but looking closer one realizes that these are… roots! Indeed, it was this exact painting that inspired some evening dresses in the Dior collection. These were plume embroidered and reflected the Renaissance style in their skirts.