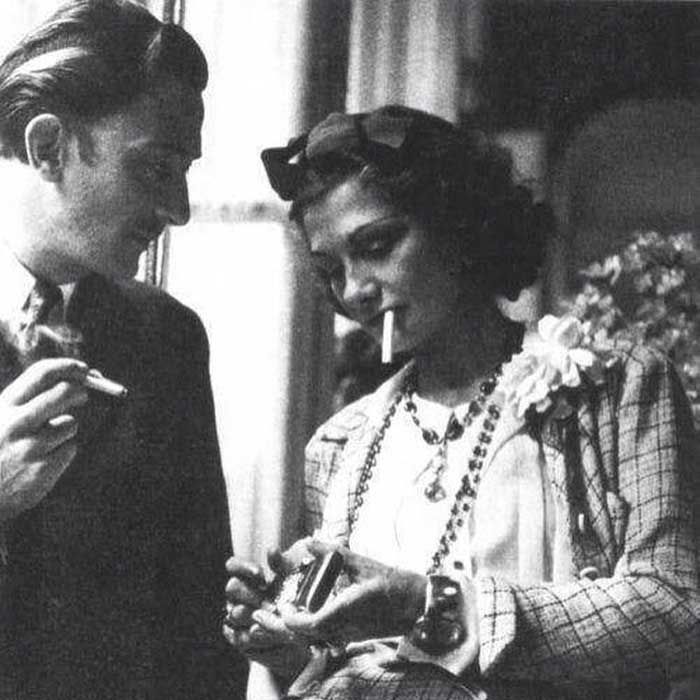 When Dali moved to Paris in 1926, Chanel was already a famous fashion designer. Dali had already worked in the fashion industry, as he had collaborated with Elsa Schiaparelli. But, Coco also introduced him to theatrical costume design, jewelry, and other things that combined both art and fashion. They both had quite different personalities. Dali was eccentric in his social life and his work. Chanel was liberated but chic and elegant. Despite their differences, the friendship between Salvador Dali and Coco Chanel was dynamic and it reportedly resulted in a love affair.

In the late 1930s, Chanel invited Dali to Villa La Pausa, her home on the French Riviera. She provided him with a studio and a workplace where he could create. She was very into art and had hosted many artists at her home including, Igor Stravinsky (composer), Luchino Visconti (film director), Jean Cocteau (poet), and Pablo Picasso.

While staying at Villa La Pausa, Dali created his work Endless Enigma. It is also believed that whilst there he worked on Apparition of Face and Fruit Dish on a Beach.

Chanel also loved the theatre and she had designed costumes for ballets, operas, plays, and films. So, she introduced it to Dali. Dali had already created costumes for the production Tristan Fou, of the Ballet Russe de Monte Carlo in 1937, along with Elsa Schiaparelli. In 1939, he worked with Chanel for the Bacchanale ballet. Coco helped him create unique costumes. That is, they featured eccentric elements on ordinary clothes. For example, the pair created a hoop skirt covered in teeth and a men’s ensemble decorated with red lobsters. The red lobster would later become a sexual symbol that Dali would use in his fashion designs.

Dali’s collaborations with Elsa Schiaparelli and Christian Dior resulted in wearable surreal artworks. That is, they included elements of avant-garde aesthetics and illusion. However, Dali didn’t stop there. He explored other areas of fashion too, such as textiles, jewelry, and fragrance bottles. For certain items of jewelry, for example, The Eye of Time, Dali worked with Duke Fulco di Verdura. Verdura was a new jewelry designer, employed by Chanel for her own jewelry designs.

Naturally, Chanel’s influence is apparent elsewhere too. Dali designed the Essence of Dali, whose bottle mimics the Chanel No. 5 perfume bottle. However, he placed a pair of eyes and a mustache, resembling his own, in order to change it up a bit.

“Chanel’s originality was the opposite of mine… I have always shamelessly exhibited my thoughts, while she neither conceals hers nor shows them off, but instead dresses them up… She has the best-dressed body and soul on Earth.”

The friendship of Salvador Dali and Coco Chanel is one of the most iconic in the history of fashion and art.