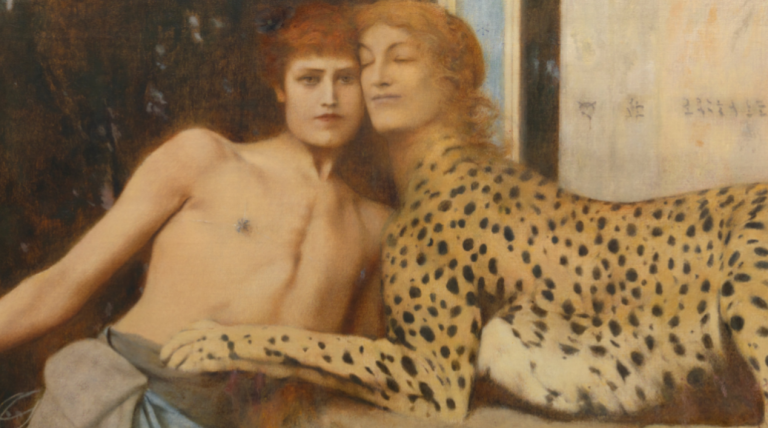 Symbolism developed in the 19th century. It began as a literary movement but quickly moved into other art forms. Symbolist painters rejected the advent of new technologies, scientific thought, and naturalism. Instead, they favored thoughts and feelings. Given the Symbolists’ love for the written word, Symbolism and mythological subjects went hand in hand. These artists drew inspiration from ancient mythology and used its symbols to create their own dream worlds.

Oedipus and the Sphinx

In the above painting, the Greek hero Oedipus faces the Sphinx. The Sphinx was a mythological beast that had the head of a woman, the body of a lion, and the wings of a falcon. According to the myth, the Sphinx terrorized the city of Thebes, asking all passersby the riddle “What creature walks on four legs in the morning, two legs at noon, and three legs in the evening?” Anyone who answered her incorrectly was instantly devoured by the beast. We can see their remains in the foreground of the painting. Oedipus solved the riddle, thus freeing the city. The answer to the riddle is “Man” – who crawls on all fours as a baby, then walks on two legs as an adult, and then finally uses a cane (three legs) in old age.

Women became a favorite subject in Symbolism, often appearing in the role of the dangerous femme fatale. It is argued that the Sphinx, a beast with a female head, symbolized the fear and anxiety men felt towards the changing status of women in the real world. However, if we look at the painting, the interlocking gaze of Oedipus and the Sphinx, also reveals the allure he felt.

France was the birthplace of the Symbolist movement and Gustave Moreau was one of its leaders. His style resembles the art of the Renaissance with its careful drawing and sensible coloring.

In the painting above, the Roman god, Jupiter, appears in all his glory in front of his mortal lover Semele. In the myth, Juno, Jupiter’s jealous wife tricks the young woman by taking the form of Semele’s nursemaid and suggests that Semele should ask Jupiter to appear before her in all his power. Juno knows that Jupiter’s divine power will kill Semele.

In the painting, we see Semele sprawled over Jupiter’s lap, as the true power of the god is too much for her and she has been struck down by his lightning. Just below her in the scene, there is a winged figure averting his gaze, this is the god Bacchus who is the unborn son of Semele and Jupiter. The story goes that Jupiter took the baby from the dying woman’s belly and sewed him into his own thigh where Bacchus develops.

Below Jupiter’s throne, we see a series of allegorical figures. On the left side, we see Death, carrying a bloodied sword, her job here is finished. In the middle, we can see an eagle, which is the symbol for Pan – the god of wild nature and a follower of Bacchus. Directly behind him, the figure of Sorrow is holding a white lily, a symbol of purity. There are angels on either side of the canvas, and at the bottom of the scene is Hecate, the goddess of the night with a crescent moon above her head.

Moreau mixed both Christian and Pagan imagery in order to create a divine vision of God’s power.

Pandora is the “Eve” of Greek mythology. She was the first woman, created by Hephaestus out of the soil. The gods bestowed their best gifts upon her. For example, Athena taught her to weave, Venus made her beautiful and Mercury gave her an agile and inquisitive mind. Hence her name, Pandora, which in Greek means she who has all the gifts. However, the gods also gave her a jar or box which contained all the evils that afflict humanity. In the myth Pandora lets her curiosity get the better of her and she opens the box releasing its contents to the four winds. She becomes scared and quickly closes the lid, leaving just one thing inside, hope.

In the painting, we see Pandora moments before she opens the box. She stands naked in a garden. The painting dates from 1914, a time when the story of Pandora once again became relevant, as it was the year that saw the start of World War I.

From France, Symbolism traveled to other European countries mainly in the north of the continent. In Belgium, we find Fernand Khnopff and his painting, Caresses.

In a wide landscape, a man and a mysterious woman-cheetah creature are embracing. Looking at the two figures, this is probably a forced embrace. The man looks awkward, perhaps trying to think of a way out. Next to him, the beast seems content with a slight smile on her face. Khnopff did not specify the myth that sparked his interest, possibly this is his interpretation of Moreau’s Oedipus and the Sphinx. There are some elements that point in that direction like the spears both men hold in each of the paintings.  Once more, we see the Symbolist’s fascination with the duality of women, who are both alluring and dangerous at the same time.

The story of Danae has inspired artists since the Middle Ages. According to the myth, Danae was the daughter of King Acrisius of Argos. The King receives a prophecy from the Oracle, which foretells that he will be killed by Danae’s child. In an attempt to defy fate, he locks up his daughter in a cellar. However, the ever crafty Jupiter turns himself into golden rain and enters her room. The fruit of their union is Perseus, who years later, fulfills the prophecy and kills his grandfather.

In his painting, Gustav Klimt blends Symbolism with Art Nouveau aesthetics. In Danae, the figure of the young woman and the golden rain dominate the canvas. The purple cloth represents her royal origins and the Art Nouveau circular designs represent her female nature. The artist candidly explores female sexuality. However, the heavy ornamental style decreases the sexual tension of the piece.

The Beguiling of Merlin

Edward Burne-Jones is usually considered within the Pre-Raphaelite movement. However, in his work, he mixes elements of Aestheticism as well as Symbolism. Burne-Jones’s paintings served as inspiration for Symbolist artists across Europe, making him a forerunner of the movement.

The Beguiling of Merlin shows the climax of the legend of Merlin and Nimue. The young woman has studied under the wizard, learning the secrets of the magic arts. He falls for her but Nimue betrays him. She steals Merlin’s spellbook and casts a spell that traps Merlin in a tree.

Yet another example of the femme fatale, but this time as a sorceress. To the Victorians, sorceresses and witches represented the learned woman – a woman who has received an education. They used stories like that of Nimue to demonstrate the danger that an educated woman could pose to society. More information on this fascinating subject can be found here.

Another work by Burne-Jones is derived from the German legend of Tannhäuser. According to the story, Tannhäuser was a knight who found Venus at home in Venusberg and immersed himself in a life of earthly pleasures. Later he grows remorseful and travels to Rome to beg absolution from the Pope. The Pope mocks him saying that he is as likely to be forgiven as is his papal staff to blossom. The forlorn knight leaves and returns to Venus. However, three days later, the papal staff miraculously blossoms. Immediately, a search party is dispatched but it is too late, Tannhäuser is never heard of again.

The Latin title of the painting translates into ”the praise of Venus”, in this artwork, Burne-Jones creates a luxurious and voluptuous atmosphere. On the canvas, Venus languidly rests whilst she is entertained by four musicians. She sensually passes her hand through her hair whilst admiring her opulent surroundings. Directly behind the musicians, through the open window, we can see the soldiers conducting their fruitless search for Tannhäuser.