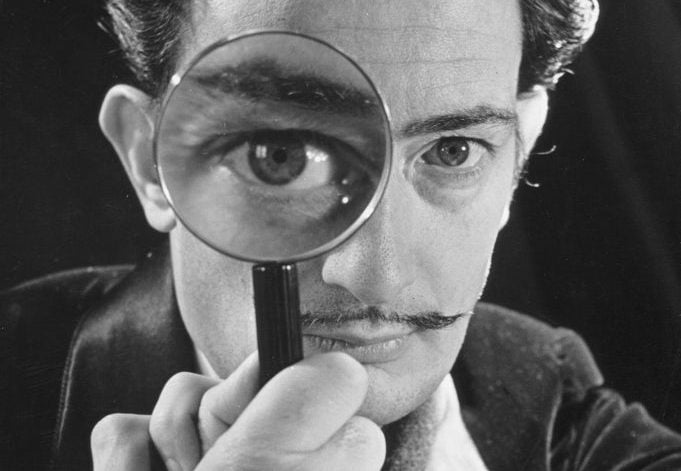 It was very difficult to choose only 10 weird things about Salvador Dali. He is widely known as one of the most eccentric artists in art history. And that manifests in his art, difficult character, and behavior. Dali was enchanted by things like Freudian psychoanalysis, sadomasochism, fear of castration, or tarot reading… But here it is: 10 weird things about Salvador Dali you should know!

1. Dali believed he was the reincarnation of his dead brother.

Salvador Dali’s mother gave birth to her first son in 1901, but the poor child died of gastroenteritis at 22 months old. His name was… Salvador. Nine months after the child’s death, the second Salvador was born and named after his late brother.

When Dali was five, his parents took him to first Salvador’s grave and informed him of their belief that he was the reincarnation of his own dead brother. This had a huge psychological effect on the boy.

2. He stole a wife from his friend.

In August 1929, Dali met the love of his life: Elena Ivanovna Diakonova, better known as Gala. Unfortunately, Gala was already married to the French Surrealist poet Paul Eluard (and also involved in a romance with Max Ernst). But it wasn’t a big problem for Dali and, in the end, Gala married Dali in 1934. Even though, she was 10 years older than him, they would remain together until her death in 1982. Gala became Dali’s muse and business manager, her financial shrewdness supported his extravagant lifestyle. She was also famous for directing Dali’s business by checking it out in Tarot cards.

You can read the story of Dali and Gala here.

Each morning when I awake, I experience again a supreme pleasure – that of being Salvador Dali.

It sounds a little like Kanye West’s bragging, doesn’t it? Dali was keen to express his polymath qualities during his chaotic appearance on What’s My Line?, answering yes to almost every question and professing to be an athlete, writer, and comic strip artist.

4. Dali had a perverse obsession with Hitler.

5. Dali loved money so much that he even starred in commercials.

Within the art community, Dali was renowned for his love of making money. He was even called “Avida Dollars,” which is both an anagram of Salvador Dali and a signifier of his greed. Dali appeared in ads for Lanvin chocolates, brandy, and even Alka Seltzer – you can watch all of them here.

6. He designed a logo for Chupa Chups.

He designed the famous Chupa Chups lollipops logo and the 1969 logo for the Eurovision Song Contest. Nothing to add to this.

For a long time, I experienced the misery of believing I was impotent

9. He found deep meaning in cauliflowers.

Dali filled up a white Rolls Royce Phantom II with 500kg of cauliflowers and drove it from Spain to Paris in December 1955. The reasoning was, he later told an audience of 2,000, that “everything ends up in the cauliflower!” Three years later, he explained to American journalist Mike Wallace that he was attracted to their “logarithmic curve.”

Dali had a lot of famous friends and hung out with Elvis Presley, John Lennon, David Bowie, Pablo Picasso, and even Sigmund Freud. But probably his weirdest acquaintance was rock legend Alice Cooper. He became fascinated by his stage show, which was partly inspired by Dali’s work.

Dali gave Cooper a plaster sculpture of his brain, crowned by a chocolate eclair with real ants running down the middle—and then asked Cooper to model for him. Cooper ended up doing so under armed guard since he was wearing a $2 million diamond tiara provided by Dali. At the end of it, Dali had created an amazing revolving hologram of Cooper covered in diamonds and biting the head of a Venus de Milo statuette. He accomplished this by using lasers to capture a three-dimensional image.