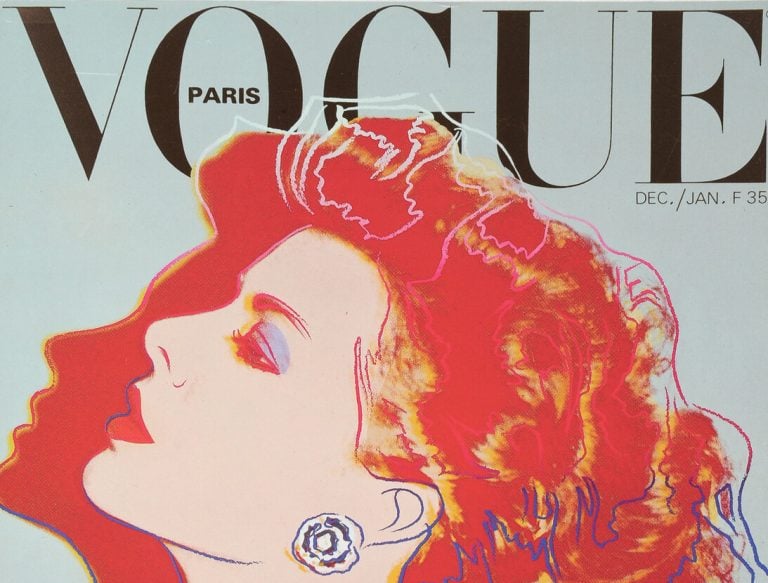 It won’t be a lie if I say that Vogue has been one of the most influential magazines in the world for at least a century. So it’s no surprise that Vogue covers have been created by some of the greatest modern artists.

Below, take a look at some enthralling magazine covers by Salvador Dalí, Andy Warhol, and other famous fine artists. Even Matisse made an appearance as a backdrop and while not his design, Marcel Duchamp’s The Large Glass sculpture appeared as a prop with his blessing.

Ethel Wright was a British painter of the Victorian era. Contemporary art periodicals reveal that Wright enjoyed modest success as a fashionable “lady artist” in the 1880s and 1890s. She was also known for her paintings of Pierrots. Wright’s work was more often presented or critiqued in the context of “women’s work.” Frustration with the limitations imposed on women’s artistic output and ambition may have led Wright to the suffrage movement.

James Allen St. John was an American illustrator, artist, and author. He was famous for his illustrations in many novels, and is considered to be “The Godfather of Modern Fantasy Art.”

Eduardo Garcia Benito was an Art Deco artist and a contracted illustrator at Vogue throughout the 1920s and 1930s. Benito went to Paris at the age of 19, where he established himself as a fashion illustrator. His style is reminiscent of the Cubist paintings of Pablo Picasso and the sculptures of Constantin Brancusi and Amedeo Modigliani.

George Lepape was a French artist who created eight covers for Vogue in 1929. His illustrations show some thin and long-limbed feminine silhouettes, whose heads are wrapped into turbans. During that time, he started collaborating with La Gazette du Bon Ton. Lepape created many sketches for some important fashion houses, such as Lanvin, Worth, and Doucet, and he created the cover pages of Harper’s Bazaar, Vanity Fair, and the first British edition of Vogue; he also worked for many years with the American edition of Condé Nast.

Andre E. Marty, a Parisian artist, regularly contributed fashion illustrations to other prestigious fashion magazines, such as Harper’s Bazaar or La Gazette du Bon Ton. He also illustrated numerous books and designed advertisements and theatre posters (including a number of famous ones for the Ballets Russes and the Théâtre National de l’Opéra in 1910). In the 1930s, Marty worked as a costume and set designer for the theatre, cinema, and ballet. Later, he also produced designs for enamel vases, plates, and jewelry.

Carl Erickson was an American fashion illustrator on top of his game for over 35 years. In 1916, Erickson made his debut in Vogue and by 1925, he was a regular artist for the magazine. He was also a prominent portraitist and painted many famous figures such as Queen Elizabeth II, President Franklin D. Roosevelt, singer Frank Sinatra, and an art patron named Gertrude Stein.

Salvador Dalí, the iconic Surrealist painter, contributed paintings and illustrations to the magazine from the 1930s to the 1970s. He was busy, not only with classical art but also with fashion. He was friends with Coco Chanel and worked with a fashion designer named Elsa Schiaparelli as well as Les Ballets Russes de Monte Carlo, and developed his own designs and jewelry.

Rene Gruau, or Count Renato Zavagli Ricciardelli della Caminate, was a world-renowned fashion illustrator whose works have appeared in prestigious museums all over the world. In 1909, he was born in Rimini, Italy to an Italian aristocrat for a father and a French socialite- whose last name he adopted- for a mother. He moved to Paris in 1924 and commenced his career as a fashion illustrator. During the 1930s, he began to sketch for Parisian magazines and newspapers such as Femina and Le Figaro and soon, began working with high style magazines such as Marie-Claire and L’Officiel.

Erwin Blumenfeld was an American-German fashion photographer strongly influenced by Dadaism and Surrealism. He worked for Vogue, Harper’s Bazaar, and Life magazines. In 1936, he emigrated to Paris where he was interned by Nazis in a concentration camp in 1940 due to his Jewish origin. In 1941, he somehow made his way to the United States. In the 1940s and 1950s, he became very famous for his fashion photography and artistic nude photography.

Joan Miró was a famous Spanish Surrealist artist. Earning international acclaim, his work has been interpreted as Surrealism– a sandbox for the subconscious mind, a re-creation of the childlike, and a manifestation of Catalan pride. In numerous interviews dating from the 1930s onwards, Miró expressed contempt for conventional painting methods as a way of supporting bourgeois society and famously declared an “assassination of painting” in favor of upsetting the visual elements of established painting.

Sir Cecil Beaton was a famous British photographer who captured fashion, portraits, and war in his work. Those who are not familiar with fashion photography might remember his character from the famous Netflix historical drama series, The Crown. Beaton often photographed the British royal family, as we see in The Crown. On this cover, we see a background with Henri Matisse-inspired cutouts.

Some of the Vogue covers featured famous artworks. Here, we see a model posing with Marcel Duchamp‘s The Bride Stripped Bare by Her Bachelors, Even or just simply The Large Glass.

Andy Warhol, a famous Pop Art artist, created this Vogue cover in his signature silkscreen painting style. On this cover, he portrayed the Princess of Hanover, or better known as Caroline of Monaco.