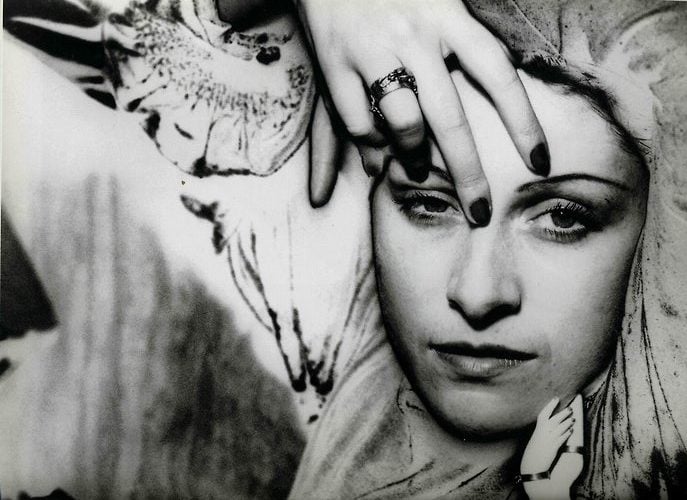 The name Dora Maar (1907 - 1997) reminds most people of Picasso. But as well as being his muse and lover, she was also an ambitious and progressive artist. Before they had even met, she was already known as a Surrealist photographer and stood up for the left-wing ideals of the 1930s. Picasso painted her as a Weeping Woman, but as you will read, she was much more than that!

Maar was destined to make a name for herself in the Surrealist art circles. Born Henriette Theodora Markovitch, the daughter of a French mother and a Croatian-born father, she met those who would found Surrealism during her studies. Maar studied art at various schools: the Central Union of Decorative Arts (already a progressive school where girls learned the decorative arts), the School of Photography and the School of Art in Paris (l'Ecole des Beaux Arts). It was there where she met Jacqueline Lamba, who would later marry André Breton, one of the co-founders of Surrealism.

Her First Works as an Advertising Photographer

If you are wondering why Maar has been portrayed several times by Man Ray, one of the most famous photographers in the 1930s, the answer is quite simple: She worked as an assistant for him and they stayed in close contact even afterwards, when she opened a photography studio with Pierre Kéfer at 29 Rue d’Astorg, Paris. The building still exists next to a beautiful wooden gate, however it currently accommodates a sushi bar. They managed advertisement projects and worked for several magazines such as Le Figaro Illustré and Beauté Magazine.

Despite this commercial element, the influence of Surrealism sneaked into Maar's works. She liked to balance on the thin line between fantasy and reality, as you can see in her advertisement for a bottle of Pétrole Hahn hair oil. The bottle lies on its side, but instead of oil, out spills a tangle of long, wavy locks of hair.

From Social Engagement to Surrealism

In 1933, Maar visited Barcelona and the year afterwards London, where she photographed the effects of the economic depression following the Wall Street Crash of 1929 in the United States. Being a woman of rich descent, she was quite shocked when she saw the miserable living conditions of people and the approach of fascism. It was these experiences that triggered her involvement in left-wing politics at that time. Maar was part of several ultra-leftist associations and often participated in demonstrations and café conversations, together with other Surrealist artists. She became very politically active at this point in her life, when she was still only 25 years old.

This inspired Maar to start experiencing with surrealistic photomontages. This technique is often used as a means of expressing political dissent: It was first used by the Dadaists in 1915 in their protests against World War I. In the 1920s, it was adapted by the Russian constructivist Aleksander Rodchenko as a protest against social imbalance in his country. Even today, artists such as Peter Kennard use photomontages to express their opposition to economic hardship and the nuclear arms race. In fact, the photomontage is as such a very surreal tool because by cutting and pasting images together, the signification of the result is often totally different to the trivial original images.

Dora Maar's photomontages, however, are different to those initiated by the Dadaists and even by some Surrealists such as Georges Hugnet. Where the usual photomontages are quite absurd, she creates scenes that could almost have taken place. The woman wearing a star-shaped hat is a good example: Seen from the back, it could simply be a hat, but at the same time, the image fits perfectly into the iconography and Surrealist ideas of the unconsciousness, sleep and dream.

It is clear that Dora Maar felt like a fish in water in the company of the Surrealists. Her group of friends included writers, photographers and filmmakers who all had the same points of view in life. Thanks to her contacts, she was able to participate in various international exhibitions and publications between 1933 and 1938.

Maar created the photomontage "Le Simulateur" (The Faker), inspired by the photographs she took a few years earlier in Barcelona. She reused the photo of a young acrobat and placed him upside down in a strange architecture. By representing his body like this, the acrobat seems to be deformed, and so Maar refers to the difficult social conditions of the 1930s, which is a prelude to World War II. The European political climate was extremely tense at the time and the building in which the acrobat performs his stunt also seems strange. You must turn the photomontage around to see it. Dora Maar has placed a picture of an attic upside down and has drawn the bricks on it by hand. Even though it looks like a dream, the separate elements fit together seamlessly.

Monstre sur la Plage (Monster on the Beach) also explores the anxieties surrounding the crumbling political climate and the threat of war. The disturbed figure is staring at the sea, waiting for some upcoming event. Today, this photomontage may seem strange because when you see a picture related to World War II and the sea, you might automatically think of D-Day and the battles on the beaches of Normandy. This provokes an intriguing thought: Was Dora Maar a clairvoyant? Being French, she might have pictured a German soldier on the beach. On the other hand, she probably applied a common use in Surrealism by depicting the monster in an ironically idyllic setting such as a calm sea.

How would a photographer and a painter meet? At a photography exposition? Or a painting exhibition? In this case, it was neither. Maar served as an on-set movie photographer, and at the end of 1935 they met during the filming of Jean Renoir’s “Le Crime de Monsieur Lange”. It was Paul Eluard, a French Surrealist poet, who introduced her to Pablo Picasso. Their relationship would last for nearly nine years, during which time Picasso did not end his relationship with Marie-Thérèse Walter, mother of his daughter Maya. Maar was never at peace with her situation, and tensions worsened when Picasso began an affair with the 21-year-old Françoise Gilot in 1943 (Picasso was 62 at that time).

Picasso has depicted Dora Maar many times as his weeping woman, but she also deserves credit for recording the creation of Picasso’s famous “Guernica”. She photographed the successive stages of the creation of the painting in his studio from May to June 1937; she might even have influenced him during the creative process. Do you see the light bulb at the center of the painting? Would he have been inspired by one of her photographic lamps? We don’t really know, but one thing is for sure: If it wasn’t for Maar, we would not have access to these rare and fascinating photographs!

During her relationship, Maar abandoned photography and started painting. In his very persuasive way, Picasso pushed her to paint in a Cubist style, which he had long mastered. You can imagine that he was very jealous of her excellent photographic work, so this was his way of staying artistically ahead: His paintings were bound to overshadow Maar’s.

After breaking up with Picasso, he bought her a house in Ménerbes, France, where she withdrew from public life. Maar suffered from a mental breakdown (caused by the years of tension during her life with Picasso and of course World War II). She entered a psychiatric clinic, where she endured violent treatment, including electroshock therapy. In her later life, she continued painting in different styles, but never returned to public life.