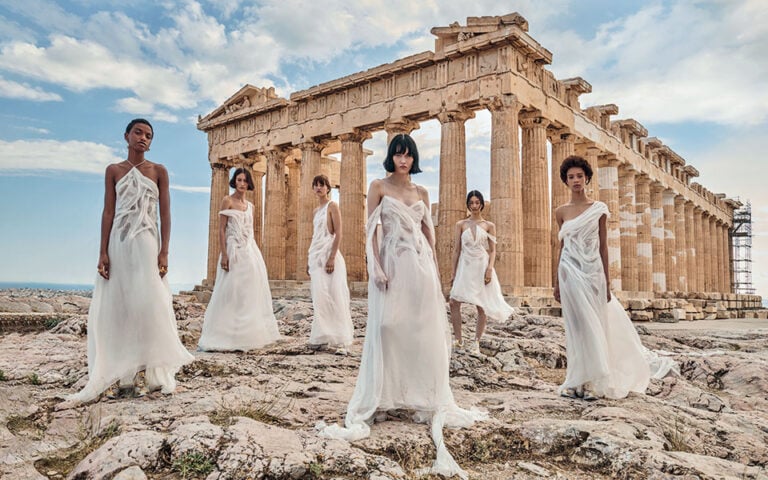 The fashion industry’s deep interest in Ancient Greek aesthetics is not some recent fad. Many of the leading fashion houses have been integrating the visual elements of antiquity in their products and line-ups for a long time, and Christian Dior is one of them. Of course, major fashion brands often have their runway shows in an extravagant manner where they share what they have designed with the public, media, and fashion coteries. After 70 years, Dior revisited Athens and conducted its show along with a series of photoshoots in various archaeological sites. In this article, we will take a general look at the collection and question the practice of letting brands temporarily occupy important archaeological sites.

Dior introduced its inter-season collection—Cruise 2022— in June 2021 in Athens, Greece. The collection’s artistic characteristics and aims were shaped and orchestrated by Italian fashion designer and Dior’s current creative director, Maria Grazia Chiuri. One might ask, “Why did Dior pick Athens to stage the show, and why did they decide to derive inspiration from Ancient Greek aesthetics?” Well, I’ll provide you with my subjective answer. Whether the subject is fashion, architecture, literature, or art, when we engage in any artistic creation or pondering process, we are often drawn to a few specific periods and locations in history, and one of them is undoubtedly Ancient Greece. With its timeless and unwavering aspects, this era stands in our history like one titanic and sempiternal muse who is always there for minds seeking a starting point in their creation course that does not lack beauty. It is why eight models posed for photojournalist Jean-Pierre Pedrazzini for Dior on the Acropolis of Athens in 1951, and now after 70 years, it has occurred in 2021 again.

Expectedly, the most common traditional ancient Greek garments, such as peplos and chiton, formed the mainstay of Chiuri’s designs. A peplos is a sewn tubular-shaped piece that was exclusively worn by women. The top layer of the peplos would be draped at the waist, which created the illusion of two-piece attire. On the other hand, a chiton sometimes consisted of two pieces or was one big rectangular cloth worn by both men and women. Depending on the style, it was supported by a belt and various clips. When we look at the pieces worn by the models, obviously the Ancient Greek influence is apparent, but along with that, we also see various important design choices to maintain modern comfort and aesthetics. Chiuri beautifully managed to render her creations up to date without overly diminishing the influence of ancient perspectives. In some cases, the structure of the piece has a vague connection to antiquity, but even in those instances, Chiuri implemented ancient Greek motifs or the portrayal of a figure—such as the Goddess Athena— on the piece. In this way, she overcame the constraint of the past and was still able to present a modern creation that harmonized with an ancient narrative in possible forms.

While utilizing Dior’s resources and her years of experience to create this collection, Chiuri also greatly relied on the craftsmanship of notable Greek artisans. This was both a practical and meaningful decision because their mark would bear the region’s cultural and artistic heritage, and without it, the collection could not attain its true potential. One of these artisans was Aristeidis Tzonevrakis, a tailor and embroiderer based in Argos, Peloponnese. With his beautiful approach in embroidery, which has both motifs from the mainland and the islands, Tzonevrakis worked on a jacket and Dior Book Tote (signature bag introduced by Chiuri). The other atelier/factory with which Chiuri collaborated was Silk Line established in Soufli near Evros River. The small town is famed for its long past in the quality linen industry. Silk Line contributed to the collection by using their unique silk weaving techniques that includes creating a Jacquard Loom.

The family-owned atelier, Tsalavoutas, located in Piraeus, Athens, was also onboard. Established in 1936, this atelier is famous for manufacturing one specific thing; authentic Hellenic fisherman’s caps. Starting from the 19th century and onwards, this historic accessory was able to embrace ancestral and modern techniques within a single garment. Besides these crafters, Chiuri collaborated with Greek artist Christiana Soulou and Italian artist Pietro Ruffo. Soulou drew well-known female figures from ancient Greek literature and myths such as Arachne, Ariadne, and Penelope, whose tales converge with the acts of transformation and adaptation. She also drew more subtle and abstract designs where the figures were represented by single colours and portrayed as they were in motion. Soulou briefly describes her art with these sentences, “My drawings will never be seen in their entirety. Only fragments will be seen. You can only approach truth through the things that you do not fully say or show.” On the other hand, Ruffo contributed to the collection by depicting female athletes from certain ancient Greek vases. He also redesigned the Dior star, which is a dear talisman for the fashion house.

Of course, all of these beautiful pieces had to be captured by talented photographers and directors, so the world could appreciate the essence of what was collaboratively created. For the main show of the collection and Dior Magazine No.36 (from Dior to Greece), the fashion house worked with terrifically talented female photographers— Elina Kechicheva, Ria Mort, Mara Desipris, Efi Gousi, and Ioanna Sakellaraki— to conduct a series of photoshoots in different locations of Greece including Athens, Milos, and Ancient Nemea. I was lucky enough to ask one of these talented photographers—Ioanna Sakellaraki—about her experience and work which she undertook for Dior. Here’s how she explained her work:

“In my images for the Cruise 2022 collection, I experiment with scale, form and monumentality through a play of mirrors, aiming at composing time-sequenced moments of architectural and sculptural realities, as manifested through the dialogue of the female silhouette with the Greek landscape on the volcanic island of Milos. Inspired by mythological personas and enigmatic female figures in the works of surrealist painters such as Giorgio de Chirico and Paul Delvaux, I aimed at retracing such visual narratives in Greek antiquity rediscovering womanhood through archetypes, symbols, allegories and forms.”

“The original idea of the mirror came from the initial stages of my research around the ancient Greek sculpture of Venus of Milo of the Hellenistic period and the various attempts to restore the statue whose arms are broken. Multiple restorations deny the authenticity of the right hand holding an apple while other creators who exercise more freedom in their reconstruction work, depict Venus holding a shield on her knee and writing on it. Others assume that her right hand is holding a mirror, while others who claim that there is no need to interpret the statue as Venus, believe that it is Victory and place wreaths in her hands.”

“This fragmentary approach to the anatomy of the statue led me to envision images of a body performing beyond boundaries, embracing variations of femininity in a universe of noble expression through nature and form. My initial ideas were further enhanced once in the real site interacting with the ethereal fabrics and accessories in the collection, beautifully worn by the muse Nassia I worked with. The collection itself inspired me to look into how garments go beyond traditional use leading to the continuous rediscovery of femininity and female creation in past and present forms.”

Additionally, Dior truly distinguished itself in cinematography and filmmaking departments. So far, four collection-specific videos were shared; two campaign videos (1 & 2), one behind-the-scenes video that solely focuses on Magazine No.36, and an hour-long documentary that narrates the origin story of the collection. Each of these videos was directed by the following prominent names: Fabien Baron, Benjamin Vu, and Marianna Economou. If you happen to take a look at these ethereal videos, an angelic voice can be heard in two of them. This voice belongs to Ioanna Gika, a Greek artist who also appeared on the collection’s show with a fascinating orchestra.

You can also watch the entire show which took place in the historic Panathenaic Stadium below:

Some Food for Thought

The Panathenaic Stadium was not Dior’s initial choice of location to execute the show; the fashion house’s goal was to stage the entire show at the Acropolis of Athens itself. It was clearly a bold request as the National Archaeological Council and Ministry of Culture rejected the proposal. In fact, in 2017, Gucci made the same request to perform a fashion show on the Acropolis, but the authorities’ stance was firm back then as well. After negotiations, Dior was only allowed to conduct photoshoots on the Acropolis, and the main show was to be staged in the Panathenaic Stadium. Additionally, the fashion house was allowed to conduct photoshoots in the Ancient Agora, the Odeon of Herodes Atticus, the Temple of Poseidon in Sounion, and the Temple of Zeus in Nemea. Chiuri also acquired the necessary permissions to observe Knossos, the Heraklion Archaeological Museum, Akrotiri in Santorini, Delphi and Eleusis thoroughly, to enhance her vision even more prior to the show.

By introducing the Cruise 2022 collection in Athens, Dior brought direct revenue to Greece, where a considerable amount of the revenue is expected to be spent towards the preservation and restoration of the national cultural and historical heritage. According to various sources, the fashion house paid over a million euros for permits. In other words, this was the price of reviving the neoclassical spirit within Dior. Thus, they were able to pay homage to the iconic 1951 photoshoot on the Acropolis, which featured an haute couture collection for the French magazine, Paris Match. Now, the question we ought to ask ourselves is whether opening the archaeological sites to these kinds of fashion houses is detrimental to the well-being of the sites or not. Should there be discussions regarding the ethicality of letting corporations occupy such important sites temporarily? In my humble opinion, as long as they are supervised by the experts of the field, we should not prevent the beauty that they have been creating; for our world is always in need of more pleasing aesthetics.

What do you think about this, dear reader? Let me know in the comment section!