Dorothea Tanning- A Woman For Whom Max Ernst Left His Wife 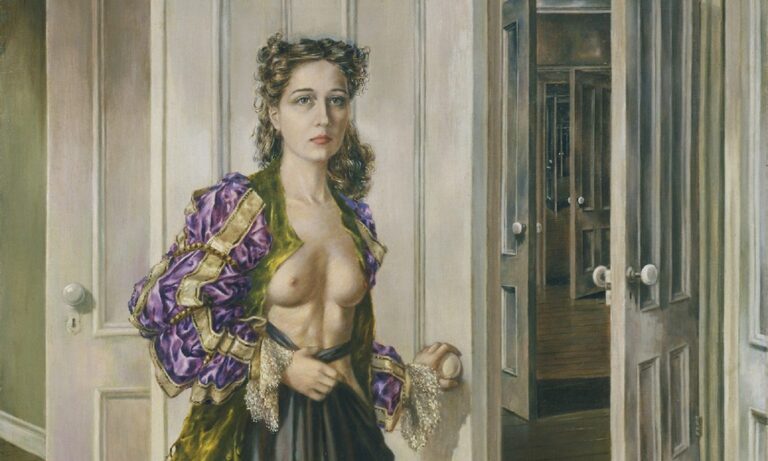 They fell in love while playing chess. After they had met at a party, Max Ernst passed by her studio to consider her works for his wife’s newly opened museum-gallery Art of This Century and was enchanted by this self-portrait:

Not only did Dorothea Tanning show at this exhibition, which featured only female artists, she also conquered Ernst’s heart. Peggy Guggenheim, who married Ernst a year before in 1941, recalled she always regretted organizing this show, as it somehow catalyzed Dorothea’s and Ernst’s love. But it was too late: Ernst divorced Peggy in 1946 and left to live with Dorothea in Sedona, Arizona.

“It’s about confrontation. Everyone believes he/she is his/her drama.”

This is how Dorothea described this Surrealist painting whose title is deceitfully called a ‘little serenade’ exactly as Mozart’s piece. Dorothea’s marriage with Ernst was about confrontation, too: her work was often overshadowed by his fame, and life with Ernst was not an easy one. After a couple of years in Sedona where they started an ‘artists’ colony’, they had to emigrate to France because Ernst was refused American citizenship. Yet, despite ups and downs they stayed together till his death in 1976.

Dorothea decided to return home and having to face a solitary life, she threw herself into the world of words: she still painted, and even sculpted, but her main focus was literature. She wrote poetry, novels. She died at her home in New York City on January 31, 2012.  She was 101 years old, and had just published her second collection of poems, Coming to That (Graywolf Press, 2011).