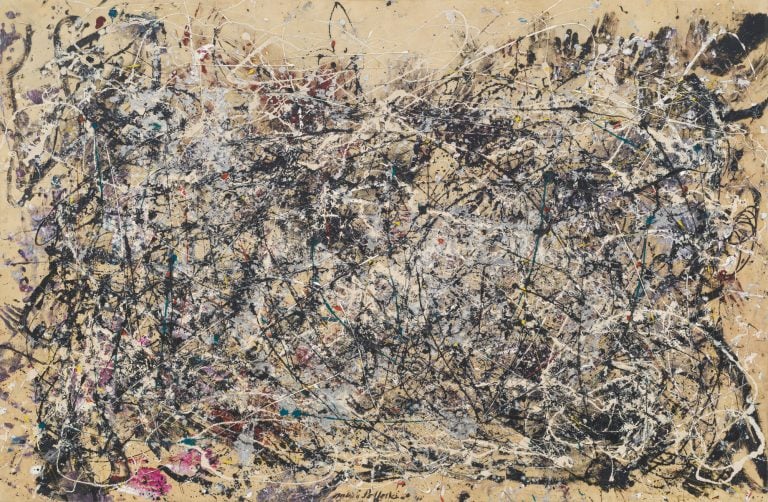 Abstract Expressionism is an art movement that emerged in the USA in the 1940s and 1950s. Some of its most prominent artists are Jackson Pollock, Mark Rothko, Willem de Kooning, and Barnett Newman. Even though it is not a cohesive style, it describes all the new forms of abstract art with an interest to convey emotion. Characterized by gestural brush strokes and mark-making, the movement left an impression of spontaneity. However, it was not chaotic or disordered. So, let’s get into this Abstract Expressionism 101 and discover this chaotic order.

Abstract Expressionism 101: When, Where, and How

Before we analyze the movement itself, it is important to clarify the historical context in which it emerged. It was mostly based in New York, and its circle became known as the New York School. As a child of World War II, Abstract Expressionism was deeply affected both by the increasing European crisis of the 1930s and the 1950s Cold War politics and conservatism.

During the 1930s, New York City was arising as an artistic center. More and more museums and galleries held major exhibitions of modern art. The Museum of Modern Art organized the exhibitions Cubism and Abstract Art (1936), Fantastic Art, Dada, Surrealism (1936-1937), and a major retrospective of Pablo Picasso. In 1939, the Museum of Non-Objective Painting opened. Later, it was renamed the Solomon R. Guggenheim Museum and held an important collection of Wassily Kandinsky’s works.

Due to the growing fascism in Europe, many artists, particularly the Surrealists, moved to New York. One of the artists that emigrated was Hans Hofmann, who was a huge influence on the Abstract Expressionists. Hofmann had earlier met Picasso, Henri Matisse, Georges Braque. He knew Cubism and Fauvism in depth. Therefore, he became an influential teacher to his students.

So, New York artists knew all the trends of modern European art. Still, they had feelings of inferiority. However, personal encounters with many European artists, such as André Breton, Salvador Dali, Arshile Gorky, Max Ernst, Piet Mondrian, and André Masson helped to remove them from the pedestal. American artists felt they needed to excel over their European counterparts and continue the artistic discussion on their own terms. Besides, when the war was over, the previous works had nothing to say anymore.

After the gas chambers… What is left there for the poor Surrealists to shock us with?

A visitor to a Surrealist exhibition. The Art Story.

Abstract Expressionism bloomed in the era of the Cold War as well as social and cultural conservatism. After the war, the US became a global power. This means, there was a huge economic growth that citizens were enjoying. However, the climate was unsettling; power came with insanity and the constant fear of the stranger, or the enemy (communism). Abstract Expressionism symbolized the freedom of speech in a sense; artistic freedom that was not the object of judgment. This is exactly why it set its roots so quickly and so deeply. The movement gained its acceptance because of the idea of freedom it provided through the action painting.

So, New York City became the new global center of the western art world. Paris lost its place as the capital of art.

Formation of the Movement

With all being said, it is clear that by the late 1940s, Abstract Expressionism had already become the new trend of the art world. Clyfford Still had changed his style from representational works to large, abstract synthesis. In 1947, Jackson Pollock discovered his signature drip style. Next year, Willem de Kooning had a powerful exhibition at the Charles Egan Gallery, where he showed for the first time his Women paintings. Any kind of composition, arrangement, or relationship between his models was eliminated, leading to pure abstraction. Moreover, Barnett Newman found his personal touch with Onement I. Furthermore, Mark Rothko began his “multi-form” paintings that would later lead to his notable mature period.

The Legacy of Surrealism

Surrealism left a great legacy behind. Abstract Expressionists managed to fit it into the post-war mood of anxiety and trauma. Since the aim of this new style was to express emotion, the artists felt that art should be free of norms; it should come from the subconscious in order to be true. The fact that most Surrealists flew to the US during the 1930s had a great impact on the formation of Abstract Expressionism. It encouraged the new artists to go in-depth into myths and archetypal symbols. Also, it helped them perceive painting as “a struggle between self-expression and chaos of the subconscious.”

As aforementioned, Abstract Expressionism was not a cohesive style. It can be separated into two distinctive groups: action painting and color field painting. In action painting, the artists “attacked” their canvas with expressive brush strokes. Artists such as Jackson Pollock and Willem de Kooning worked spontaneously, improvising. The painting was the physical manifestation of the actual work of art, that is, the process of making the artwork.

Spontaneous actions like random drips and expressive brush strokes were seen as dancing with the subconscious, so as to liberate its contents. However, that didn’t signify the absence of control. Action painting wasn’t random or disordered. The drips were expressive and the colors dispersed evenly on the canvas. It was composure in the middle of chaos.

As the art critic Harold Rosenberg wrote in 1952 in the article The American Action Painters,

At a certain moment the canvas began to appear to one American painter after another as an arena in which to act – rather than s space in which to reproduce, redesign, analyze, or “express” an object, actual or imagined. What was to go on the canvas was not a picture but an event.

Color field painters filled their canvases with large areas of a single color. Mark Rothko and Barnett Newman are the most representative ones of this technique. Clyfford Still, who was very interested in religion and myths, created very simple compositions in order to make the viewer contemplate. Color field painters wanted to escape from the “biomorphism” of Joan Miró and Picasso. They wished to move towards a more reductive style that was more a personal expression, rather than a representation of an object.

Rothko and Newman considered the color itself emotional, so their color field canvases were expressive manifestations. Rothko began his experimentation in the early 1940s with abstract symbols that later turned into entirely abstract fields of color. Newman believed that everything could be communicated by one powerful symbol. So, he created the “zip” paintings. That is vertical bands of color, painted down the center of the canvas.

Clement Greenberg, another major art critic of the time, wrote that color field painting was the new formalism. It was not interested in the contents of the artwork, but in the lines, the colors, the forms.

Female Artists of the Movement

In art history, Abstract Expressionism has been considered a male field because of its aggressiveness and violence. However, there were many female artists in the 1940s and 1950s who created powerful artworks, even though they remained absent from the documentation of the time. Such artists were Mary Abbott, Jay Defeo, Perle Fine, Helen Frankenthaler, Sonia Gechtoff, Judith Godwin, Grace Hartigan, Elaine de Kooning, Lee Krasner, Joan Mitchell, Deborah Remington, Ethel Schwabacher, and others.

They experimented with different materials and processes to set free from previous artistic rules. Their works are all distinctive and individual. Nevertheless, there are some recurrent motives, such as seasons and references from literature, music, and dance.

It wasn’t until 2016 that the women of the movement finally gained massive recognition. The Denver Art Museum organized an exhibition, Women of Abstraction, that included over 50 artworks, and showed them together as a cohesive whole.

Other artists embraced the abstract style too but remained out of the radars of the official art world. Two African-American artists can be listed here: Norman Lewis and Ed Clark. Lewis painted in bright and expressive colors and made calligraphic lines. He wanted to express the conflict between joy and the ongoing predicament within his racial community. Clark was one of the first users of shaped canvases. His contribution to Abstract Expressionism was very important.

The movement reached Japan as well. Japanese artists found a new way to depict Zen Buddhism ideas. They combined their cultural heritage with abstraction and presented what they thought was the sublime, for example Inshō Dōmoto and Kazuo Shiraga. Also, Saburo Hasegawa painted in an abstract calligraphy style. The curves and the expressive brushstrokes revealed the Buddhist ideology and captured emotions at the same time.

The Second Generation of Abstract Expressionists

The second generation of artists came a little later after the first one. They were more diverse in terms of gender, socio-cultural environment, and geography. They also had slightly different concerns. Unlike their predecessors, they wondered about more exoteric stuff: what gave meaning to the objective things in the world? In 1964, Greenberg organized the exhibition Post-Painterly Abstraction in order to present these new concerns.

It is suitable to say that when a bright star climbs very fast, its fall will be also fast. That is the case with Abstract Expressionism too. By the mid-1950s, it had run its course. Some artists, such as Rothko and Newman, had a style that was so reductive, that it left no room for development. Younger artists didn’t like this constant sensitivity.

Homosexual artists, such as Andy Warhol, Jasper Johns, Robert Rauschenberg, and Ellsworth Kelly, didn’t approve of the macho style of the New York School. Some learned from it but they elaborated their own style by including elements of irony or ambiguity. Others, like Andy Warhol, turned their backs completely. They found their calling in the pop culture of the streets, having nothing to do with the alcoholic womanizers, like Pollock or de Kooning.

By the end of the decade, Abstract Expressionism had lost its place in the artistic debate. New movements and styles emerged, such as Pop Art and Minimalism. Nevertheless, its legacy was very much present.