Robert Rauschenberg was fascinated by Willem de Kooning, and in 1953 asked the artist if he could erase one of his drawings as an act of art. The work that was created then has become a legend. The genesis of the project is well-documented: Rauschenberg went over to the master’s studio and said he’d like to erase one of his drawings as an act of art. It was suppose to be something neo-dada. Inspired by Marcel Duchamp, from 1951 to 1953, Rauschenberg made a number of artworks that explore the limits and very definition of art. De Kooning, surprised but intrigued, had three groups of drawings. He wasn't satisfied with the first - so it wouldn't work here. The next was of drawings he liked, but which were all in pencil – too easy to erase. He looked in his third group and found a multimedia work on paper that would be quite difficult to eradicate. It apparently took Rauschenberg one month to get the sheet relatively clear of marks. No photograph exists of the work he erased; but we can look at the final piece which is now owned by SFMOMA. [caption id="attachment_5829" align="aligncenter" width="620"] 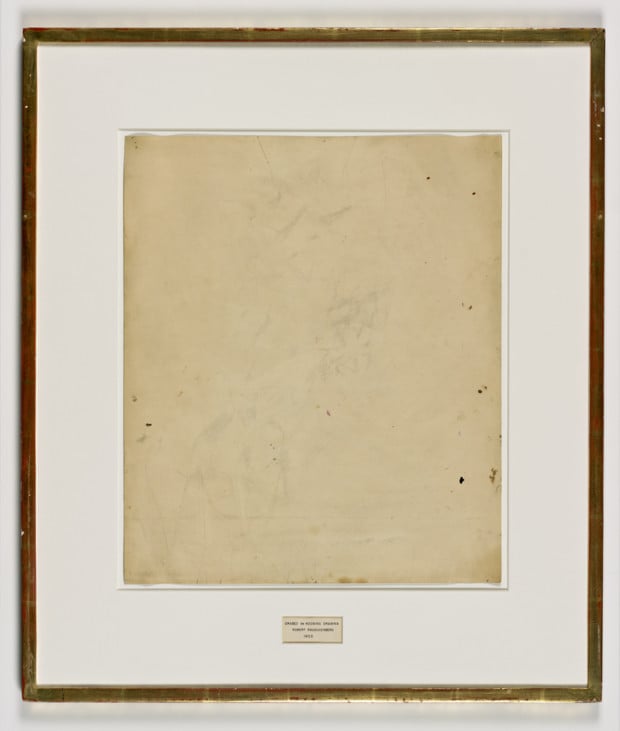 Robert Rauschenberg, Erased de Kooning Drawing, 1953; traces of drawing media on paper with label and gilded frame, 25 1/4 in. x 21 3/4 in. x 1/2 in. (64.14 cm x 55.25 cm x 1.27 cm); Collection SFMOMA, Purchase through a gift of Phyllis C. Wattis; © Robert Rauschenberg Foundation[/caption] On this video Robert Rauschenberg describes the story and process behind "Erased de Kooning" (1953): Rauschenberg’s Erased de Kooning Drawing has been hailed as a landmark of postmodernism because of its subversive appropriation of another artist’s work, and it has also been understood as a rejection of the traditional practice of drawing as the foundation of painting. It was also a a literal act of iconoclasm - so typical for our times now.

The film Andy Warhol Eating a Hamburger was created by Danish filmmaker Jorgen Leth, appearing in his art movie 66 Scenes from America which was...