Why Was Matisse Obsessed with Goldfish? 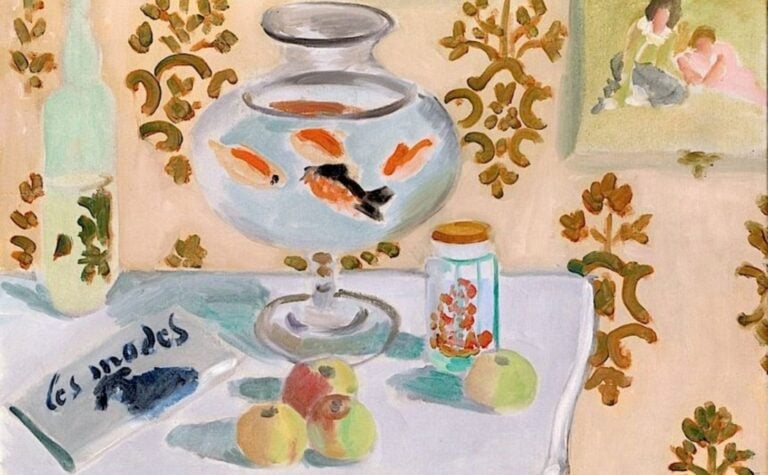 Goldfish here, goldfish there, in a bowl, in a tank, on a table, by the window, goldfish everywhere. Having been looking at Henri Matisse’s work recently, I realized there was a period in which Matisse was obsessed with goldfish. But, why?

The fish appear in at least ten of his paintings as my little investigation shows. This Goldfish belongs to a series that he produced between spring and early summer 1912.

What, of this Goldfish, Would You Wish? According to a tale, goldfish have a magic ability to make three wishes of ours come true. But is it really this mysterious quality that made Matisse obsessively paint them over and over again?

Goldfish were introduced to Europe from East Asia in the 17th century, while the US saw them around 1850, where they quickly gained popularity. Because of their metallic scales, they symbolized good luck and fortune and it became a tradition for married men to give their wives a goldfish on the first wedding anniversary, as a promise of the prosperous years to come. However, we cannot interpret goldfish in Matisse’s work in this way as he had been married to Amelie since 1898.

From a study of a still life, Matisse expanded to depict a whole room he was working in:

It is likely that Matisse became obsessed with goldfish following his trip to Tangier, Morocco where he had observed Moroccans’ slow and mindful lifestyle. He often portrayed them daydreaming or meditating while peering into goldfish bowls, fascinated by how they contemplated and enjoyed seemingly mundane elements of their reality.

For Matisse, the goldfish itself came to symbolize the serene state of mind he so admired in the Moroccans, while painting goldfish became an exercise in mindfulness as he once wrote that he dreamed of:

(…) an art of balance, of purity and serenity, devoid of troubling or depressing subject matter, an art that could be […] a soothing, calming influence on the mind, something like a good armchair that provides relaxation from fatigue.

Henri Matisse (1869-1954) was a French artist famous for his use of color. The Circus (below) is a color stencil piece from Matisse’s book...

Have you heard of Rik Wouters? He is Belgium’s best-known Fauvist, renowned for the stunning colors in his paintings. His works have often been...