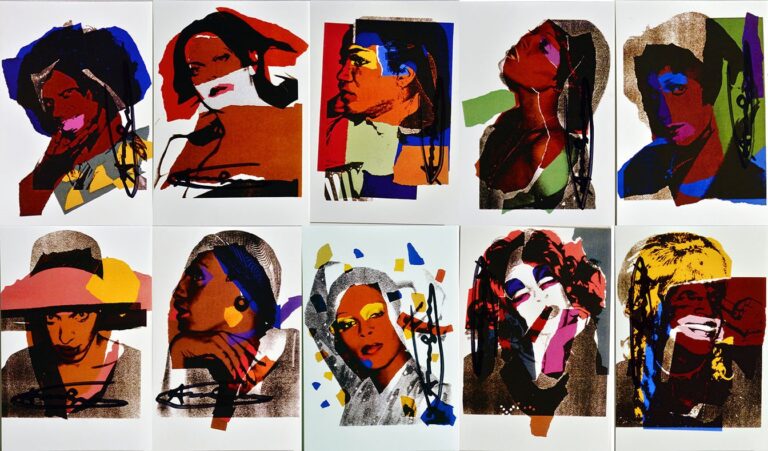 A club The Gilded Grape, situated in the no man’s land of Eighth Avenue and West 45th Street in New York City, was a hub of drag queens and black and Hispanic transvestites. In 1975, Bob Colacello, future Interview magazine editor and friend of Andy Warhol, entered it looking for drag queens ready to model for Andy for 50 bucks. This is how the series Ladies and Gentlemen was born.

The idea for the series came from Anselmino, a protegeé of Alexander Iolas, an art dealer who had previously commissioned from Warhol an edition of 100 prints of his earlier Man Ray portrait. When Warhol went to Turin in Italy on an invitation to sign his prints, Anselmino suggested to him to do a series on drag queens.

The models could dress and pose in whatever way they wanted. To make the portraits, Warhol followed his customary formula: first, he took a Polaroid photo of the sitter, then silkscreened it onto a canvas. The canvas was eventually covered with brightly colored, synthetic polymer paints. What makes these portraits different from their later and high-paying models from the 1980s, the drag queens were unknown to the wider public and completely anonymous.

The resulting portraits speak for the performative nature of the sitters: on one hand, they are portrayed in a classical fashion, often at a three-quarter angle and gazing at the viewer with a variety of expressions. On the other hand, the bright paint applied in extremely dense brushstrokes exaggerates the heavily-lipsticked mouths and long artificial lashes – the masks that they’ve created for themselves.

The series titled Ladies and Gentlemen, or the Drag Queen Paintings, was first exhibited in the Italian city of Ferrara and reviewed by Italian filmmaker and poet Pier Paulo Pasolini, to whom the transvestite world was very familiar, and who was brutally murdered just one month after he had written this review.

Is not the effort made by these ‘Transvestites’ to show themselves in a triumphant-looking mood suffused with wishful thinking and touching humanity? But beyond this effort they do not go. Naturally, the ‘Different’ in its permissive New York ghetto can triumph provided it does not go outside a behaviour by which it can be recognized and tolerated the feminine arrogance of these males is merely the grimace of the victim who wants to soften the slaughterer’s heart with a clownish regal dignity. And it’s this wry smile which makes the Transvestites all the same, like Byzantine dignitaries in a star-spangled apse.

Commenting on the series, Warhol talked about his models:

Andy Warhol, The Philosophy of Andy Warhol (From A to B and Back Again), New York, 1975.