Masterpieces of Minimalism by Robert Morris 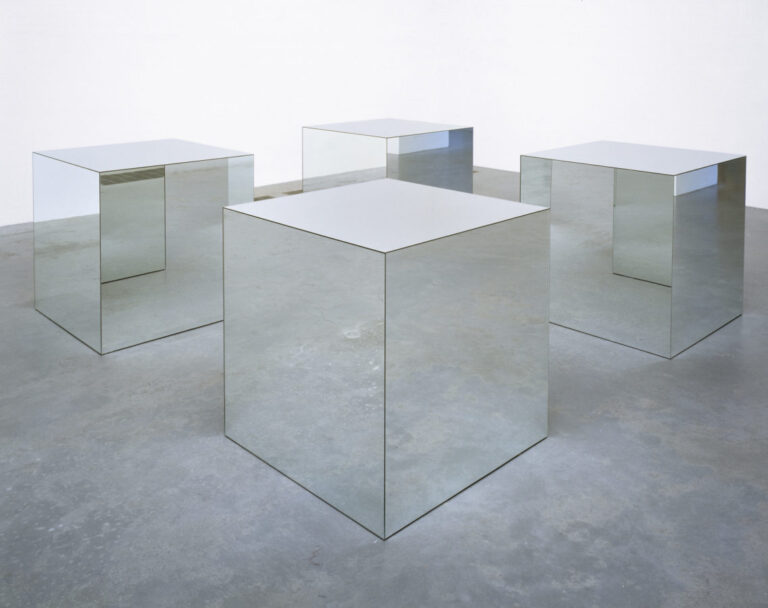 What do you get when you strip art of metaphor, representation or metaphysics? It turns out that even if „what you see is what you see”, as Frank Stella put it, and there’s no „hidden meaning” in the piece, you can still make breathtaking art. On the occasion of Robert Morris’ birthday on February 9th, we’d like to show you some of the Minimalism climaxes.

Minimal Art is not about an object itself, but everything surrounding it, including the viewer, his bodily presence and movement. But when it is made for the gallery or rests in typical museum, a scope of sensations is rather narrow. In most cases, such a place is a typical so-called white cube – white walls, evenly lit by electric light. There remains a cold, cool beauty, like in Robert Morris’ work.

There are some ways, however, to transform such a place by artist’s own means. The way Dan Flavin chose for that purpose was light. Ordinary neon tubes known form offices and supermarkets, rigorously arranged, flooded gallery spaces with light and color.

Light and color can also transform the work of art from the outside. On a Texas desert, Donald Judd turned abandoned artillery sheds into exhibition site housing his untitled metal and concrete works. Simple, multiplied forms of industrially created materials are melted into their half industrial, half desert surroundings, changing their looks with every passing hour.

Carl Andre was deeply impressed when he first saw Stonehenge. It might not be apparent on a first glance in his works, usually not grandeur by any means, but the impression of large, man-made structures was still present in his sculptures. Andre, a British representative of distinctively American movement that Minimalism was, put a strong emphasis on a material. It could be modular, industrially made, but not as cold as Americans’ favorite metal sheets. Andre used bricks and wood, arranged in a shape of small cubes. He often sticked to the ground. When he used metal, it took form of a checker floor. His art is all about attention to your surroundings. „Don’t we start on a floor when we’re infants?” Andre said once. „I just wound up where I started”.

Agnes Martin was a real workhorse. Living most of her life in seclusion of her house in New Mexico, she literally devoted her life to painting. Not only she painted everyday, she could paint one motif she imagined for ten times over and over again. If she wasn’t pleased with the result, she destroyed every unsuccessful piece and started from the beginning. She experimented for some time until she finally got to the basic structure she used in her paintings: a grid. Straight vertical and horizontal lines, stripes of color, very pale, delicate. Lines, like in Neoplaticist compositions, but without theosophic, spiritual undertones, just pure emotions. As many abstract painters, she referred to music, from which people don’t demand explanation, just embrace pure emotions. And she was a true mistress of them. If we can compare her painting to music, it would sound more like the most subtle suites by Purcell, opposed to, for example, pompous Wagnerian tunes of Rothko.

Frank Stella’s paintings from the late 50s and early 60s were also covered with strictly drawn rectilinear patterns, but their principle lied in painting itself, not emotions it could express. Subordinate to painting’s shape it was meant to merge the perception of painting as an image and as an object into one.