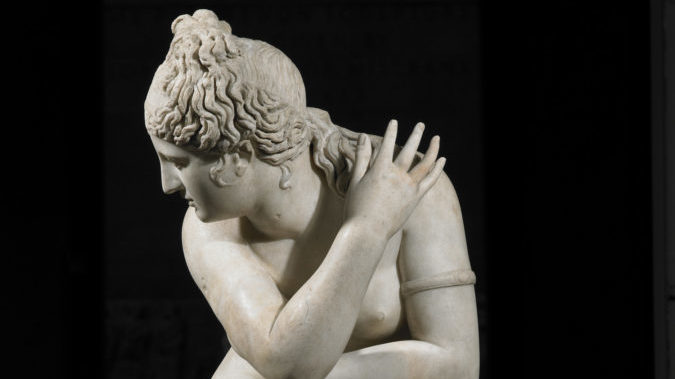 Venus (also known by her Greek name Aphrodite) is the Goddess of Love. We've explored some famous Venus' here. Next, Velázquez's portrait put her onto the list of contenders for "Best Bums in Art." Then there's a discussion of Courbet's paintings, along with Boticelli's depiction of her affair with the God of war. Today, let's take a look at some Venus' in art that are powerful not just in their beauty but in their politics.

The Crouching Venus is an image of Venus in the nude whose power lies in the magnitude of her fame. A dodgy bit of text (3.4, note 110) by Pliny the Elder describes the existence of a Hellenistic sculpture of Venus washing herself. Consequently, a Greek called Polycharmus is dubiously known as the original artist.

Whether that is the name of the artist or not is beside the point. What is significant is that the Romans made many versions of a Greek original. As with most Roman copies of Greek originals the possibilities for a Roman spin are seemingly endless. Crouching Venus' can be small, large, of different materials, in varying postures, amusingly arranged with other statues; the list goes on.

There were so many Crouching Venus types in the Roman world that the modern world inherited them, and they continue to entrance the artworld today.

The Crouching Venus in our image is the Lely Venus. Today she lives at the British Museum in London, where you can visit her for free. Once, an Italian princely family (The Gonzaga) had her in their collection, where she spent her days inspiring Renaissance painters. She made her way to England through King Charles I, who bought her in the late 1620s on the recommendation of Rubens!

We see the influence of the Crouching Venus throughout the art world, such as in Renaissance paintings. In Allegory Rubens depicts the goddess - inspired by the Lely Venus after his stay with the Gonzaga. She is alongside Bacchus (God of revelry), Ceres (Goddess of harvest) and Cupid (her son, the powerful God of Desire). The literary inspiration is a line from a Latin comedy that says "without Bread and Wine, Love turns cold."

All in all, the Romans revered the power of Venus. In fact, every year they would hold a festival in her honour. April 1st was not a day to be foolish, but a very serious affair to get the goddess on side.

That said, Titian's painting of the scene (based on Imagines 1.6 by the Greek writer Philostratus) is very playful. A crowd of cupids sits before a matronly looking Venus statue (a depiction of a well-known Venus-sculpture). The cupids get up to many naughty things: can you spot the one about to shoot the infamous bow and arrow?

Along with April 1st there were festivals in honour of the goddess on April 23rd, August 19th and September 26th. The mythological founder of Rome (Aeneas) is Venus' son, and she was the patron of Julius Caesar and also Augustus. So, we might think of her as "just" a symbol of love (the pink and fluffly kind), but this goddess is a powerful political icon too.

Moving out of Renaissance art and whizzing towards Surrealism - the 20th-century avant-garde movement in art and literature from 1920s Europe - we arrive here (still on the subject of pink and fluff): at Dalí's Venus de Milo with drawers. Which, if the title doesn't give it away, is a version of the Greco-Roman Venus de Milo sculpture.

"The only difference between immortal Greece and contemporary times is Sigmund Freud, who discovered that the human body, purely platonic in the Greek epoch, is nowadays full of secret drawers that only psychoanalysis is capable to open."

Half the size of the famous Venus de Milo, Venus de Milo with Drawers features silky mink tufts as drawer handles. Dalí' magics the Art object into a piece of functional furniture, as well as opening up the world of Freudian analysis where Greek myths are images of the psyche. A perfect demonstration of the Surrealist interest in sparking new realities and experience.

This intricate painting is tiny (28.8 x 28.9 cm) and beautiful. It is part of a new genre of Contemporary Miniature Art, for which Khalid (a Pakistani contemporary artist) is a forerunner. Traditional miniature painting in Pakistan has a rich heritage, with roots in Mughal India, Iran and also Turkey.

Though small, Khalid's Birth of Venus has very big politics. Its name Birth of Venus brings to mind The Birth of Venus by Botticelli and directs our understanding. In place of the nude classical Venus rising from the sea, we find an image of a woman wearing a blue wave-pattern burqa. Instead of the giant scallop shell there is a pink lotus leaf, the pattern of which possibly stands in for the flowing hair in the Botticelli. In each corner are four women also wearing burqas. The pattern of their burqas is not dissimilar to that of the dress of Spring in Botticelli's version. Interestingly, Spring (in the Botticelli painting) is offering Venus clothing to cover her nakedness - in Khalid's version that is obviously not necessary.

The burqa is a type of traditional clothing worn by some Muslim women. It is a whole-body veil, which is designed to protect women from becoming objects of lust. Western media often depicts them as oppressive, and even scary. However in this picture, the gold leaf, gentle watercolours, and delicate patterning certainly don't support that view. So, one question that Khalid could be posing is: is the burqa protecting and liberating Venus? Which is more oppressive, this version or a naked Venus?

The Beauty of History

Petrina Hicks' photograph might be thinking along the same lines as Aisha Khalid. Again, she is using well-known Venus imagery (associated most famously with Botticelli): the pink sea-shell. In The Beauty of History a pale skinned woman, with long blonde hair (which is behind her back), holds a large pink shell in front of her face - removing her identity from the image. Her completely smooth skin recalls the white of Classical sculpture. In this passport-like portrait the pinkness, shininess and shape of the shell (which would obviously not be permitted in a passport photo) stands in place of a full nude image. Is the title The Beauty of History a little tongue-in-cheek?

Contemporary culture tells us we have access to all areas, and that images of women are easy to read, consumable, disposable, but in fact the information we receive from an image is misleading and incomplete.

Charlotte Jansen, "Girl on Girl: Art and Photography in the Age of the Female Gaze," 2017.

Hicks uses Classical images and the notion of a male gaze in art to show us that being flawless is bland. The Beauty of History makes its subject inaccessible. She might be a Classical and Art historical ideal, but she isn't seeable.

Like our Venus de Milo with Drawers the Dom Pérignon Balloon Venus is both art and object. As The Beauty of History might highlight, she is possibly inaccessible as an image of femininity - but certainly not in a literal sense: made of polyurethane resin, she is a holder for Dom Pérignon champagne. In a way this is very fitting, considering what our Rubens painting pointed out.

Koons' sculpture was commissioned to mark the release of a Millésime vintage 2003 Rosé and there are only 650 in existence. Lots of Koons' work (like his 1980s Banality series) are known for turning banal items into high art icons, an inflatable Balloon Dog went on tour with Jay Z for example. Like the Roman emperors, Dom Pérignon understands the power of having Venus as a patron (as well as the fact that wine and love are a perfect pairing). Koons too is (in)famous for his shrewd money-making through art - earlier this year Rabbit broke the auction record for any living artist (a (w)hopping $9.1 million).

Dom Pérignon Balloon Venus handles the weight of Venus' history in the art world and makes her into one of Koons' balloon series (as well as into a piece of marketing). However, she is also part of Koons' exploration of Antiquity, a series which he began in 2008 and which plays with motifs from History of art. Koons based this commission on Venus of Willendorf, which is a Palaeolithic figurine. Apparently the curves of the sculpture match the curvature of the Champagne's flavours.