What Should We Look Like? Ask The Three Graces 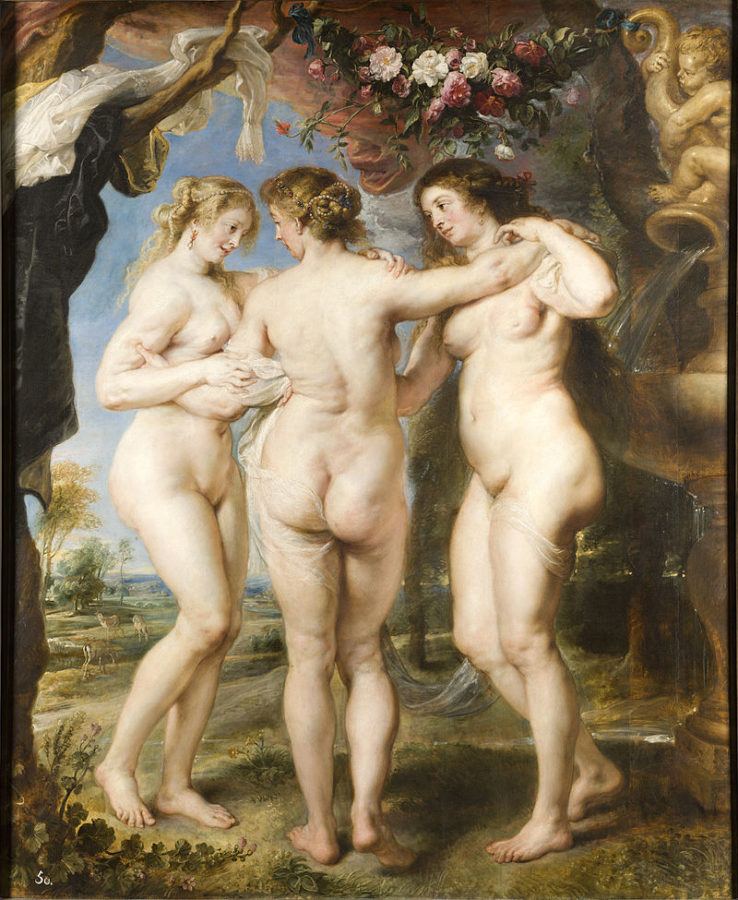 No matter which show we look at – ‘America’s Next Top Model’, ‘Germany’s Next Topmodel’ or ‘Make Me a Supermodel’ – we see the same scenario. A group of young women has to go through various tasks and in the end, one of them is selected as the ‘Top Model’.

The candidates have to master challenging photo shoots, difficult catwalks and, most of all, they have to withstand the dissecting gazes of the jurors as well as of us viewers. One thing among all these tasks is the same: Their bodies are under scrutiny, they have to position themselves in the most favorable way. The focus throughout is mainly on their body.

Seeing a female body in various poses might ring a bell. We may have encountered this in art history: The women are known as the Three Graces. In Botticelli’s painting Primavera, three women are standing in a group together. Also here, they pose in a way which is familiar to us from the Top Model shows. They, or more accurately their bodies, are shown from different perspectives.

But who are these women? They appear in Greek as well as in Roman mythology. There they represent the goddesses. Often they are of different ages, ranging from Aglaea (Splendor), Euphrosne (Good Cheer), and Thalia (Festivity). Together, they create the image of a perfect female body or even of a perfect woman.

While the Three Graces are still covered with some translucent veils in Botticelli’s painting, they appear naked in Rubens’ version of the theme. However, the women have changed since Botticelli. Now their bodies have more curves. Nevertheless, one thing remains the same, the graces pose in various perspectives for the viewer, exhibiting female beauty.

So in a time when female ideals were not to be seen on TV screens, painting could help women to find an answer to the question: What should we look like?

Also in the 19th century we encounter this female group of perfect beauty. In the sculpture made by James Pradier we see again our three women. What is remarkable is that the women resemble each other. If we now go back to the other examples, the same holds true for them. The color of their hair varies, but otherwise we could be forgiven for thinking they are all sisters. This is also a parallel to our model shows. If you look at the girls being exposed, do we really discover a difference between them?

It is only in the latest version of Germany’s Next Topmodel that one senses an attempt to introduce some variety. Now a transgender model is also taking part. But again, although the women might differ, the ideals they are measured by are the same.

As we can see, feminine beauty ideals have always been around and they will continue to exist. To criticize them or to turn a blind eye to them might not be the best approach. If we look at art, we find a helpful method. Niki de Saint Phalle took up the topic of the Three Graces, depicting a group of three different colorful women. They are together but they also stand for themselves. Their bodies are voluminous but nevertheless, their movements are graceful. They seem to dance and be happy. Here we see the opposite of the Three Graces from the past: individual women, dancing for themselves, celebrating their various forms of beauty.

What should we look like, we might ask ourselves from time to time. Here is the answer: Just as we are, and never forget to dance for this, a dance in celebration of one’s own beauty which is not judged by anyone else than by ourselves.

Read also what Rute wrote on Three Graces and Female Beauty and Candy’s “Does My Bum Look Big In This? The Female Body In Art“!

Katharina holds a phd in Art History. In her studies she concentrated on women and art. Now, she likes very much the combination of women, children and art. Her nearly three year old daughter has a great influence on this. Never before has Katharina been so often to museums as with her. Besides, Katharina is writing on her blog ArtStories.