The Sound of Colour: Music Inspired by Visual Art – Top 10 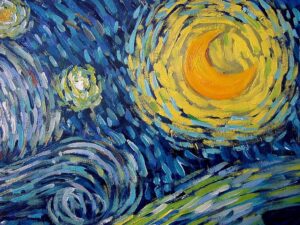 Wagnerism in Art: Painting Music or Listening to Pictures

Visual art has inspired songs from many different musical genres from classical to heavy metal, from opera to old crooners, from musicals to hip hop. Let’s take a whistle-stop tour of some of the best, and worst songs inspired by visual art!

In 2018 Beyonce and Jay Z made international headlines filming a music video inside the Louvre with some of the most dramatic art masterpieces from across three millennia. See a fascinating exploration of this in here.

This celebrity couple are known to be art collectors, but let’s remember that the relationship between visual art and music has been around for much, much longer.

“Do you smile to tempt a lover, Mona Lisa? Or is this your way to hide a broken heart?”

Nat King Cole’s melting voice croons to us about love and the beauty of the mysterious Mona Lisa. This slow piano ballad, sung with that warm voice ruled the charts in 1950.

The enigmatic Bowie celebrates the wide-ranging Pop Art career of Andy Warhol, but contemporary anecdotes tell us that Andy Warhol didn’t like the song. When Bowie played it for him for the first time, there was an awkward silence followed by Warhol saying to Bowie, “I like your shoes.”

“You took your life, as lovers often do, but I could’ve told you Vincent, this world was never meant for one as beautiful as you.”

The very same year that Bowie sung of Warhol, American singer/songwriter Don McLean penned a tribute to Vincent Van Gogh. The haunting lyrics specifically reference the blue and dark tones of The Starry Night painting, contrasting with the golden shine of the stars in the background.

Ottorino Respighi and the Botticelli Tryptich

This symphony was inspired by three paintings by Sandro Botticelli: Spring, The Birth of Venus, and The Adoration of the Magi. One of Botticelli’s most famous paintings, Primavera (Spring) is an early Renaissance work featuring mythological figures like Venus, Cupid and Mercury. It is also considered one of the most popular and most controversial paintings in the world.

“I’m sure he once walked down our street, cos he painted kids who had nowt on their feet”

Brian and Micheal, Machstalk Men and Matchstalk Cats and Dogs, 1992.

This song made number one on the British music charts and played for 19 weeks. This was much to the consternation of trendy, young pop fans who winced at the sentimental chorus sung by the children of St Winifred’s school choir. The ‘one hit wonder’ song was a loving tribute to artist L. S. Lowry who had died two years earlier. Laurence Stephen Lowry was an English artist who painted distinctive figures from his Lancashire homeland.

British rock band Coldplay play fast and loose with artistic imagery in their 2008 single and album, both called Viva la Vida. Claiming to be inspired by the final painting by Frida Kahlo, Coldplay front-man Chris Martin said that the idea behind the album is Frida Kahlo’s strength to face hardships and yet still celebrate life. He told ‘Rolling Stone’ magazine:

“She went through a lot of pain, of course, and then she started a big painting in her house that said ’Viva la vida’ I just loved the boldness of it.”

The lyrics to the song contain historical and Christian references, but no mention of their original inspiration. The magpie instinct of ‘borrowing’ from other artists continues on the album cover and music video, which both pay tribute to Liberty Leading the People by Eugene Delacroix.

The Rake’s Progress is a narrative series of paintings by William Hogarth. The story is that of Tom Rakewell, a young man who inherits his father’s vast fortune but squanders it away on drinking and gambling. His life collapses around him and in the end, he is incarcerated as a lunatic at the Bethlem Royal Hospital. Stravinsky had seen the Hogarth paintings in 1947 in Chicago. He then collaborated with Auden and Kallman on an opera based around this tragic tale.

This iconic classical piece by the famous French composer was apparently inspired by the equally iconic The Great Wave off Kanagawa by Katsushika Hokusai. One of the most recognisable pieces of Japanese art, The Great Wave is one of a series of panels focused around Japan’s Mount Fuji. Therefore Debussy produces a rich and evocative aural depiction of the wild and natural force of the sea.

Isle of the Dead and Sergei Rachmaninoff

After viewing the painting Die Toteninsel by Arnold Bocklin in France in 1907, Rachmaninoff composed a brooding and ominous symphonic poem named Isle of the Dead. Bocklin, in fact, painted a whole series of these images. All show a similar scene of a desolate island featuring a grove of cypress trees as well as a small rowboat carrying a coffin and a white-clothed mourning figure. The painting has also inspired other visual artists like Salvador Dali, and even featured in the 1933 RKO film King Kong.

Stephen Sondheim musical Sunday in the Park with George

Seurat painted A Sunday Afternoon on the Isle of Grand Jatte in 1884. This very famous painting is a perfect example of Seurat‘s technique of pointillism, a technique using simple dots of varying colour grouped together to form a discernible image. The painting shows a peaceful scene at a park near the River Seine in France. One hundred years later Stephen Sondheim was inspired by the painting. Thus he fictionalized the life of Seurat into an award-winning musical.

So, that’s just a handful of examples. You may disagree with my choices, or if you feel I’ve left out your own personal favourite, please share it in the comments! The artistic inspiration highway goes both ways of course – Wassily Kandinsky had synesthesia which allowed him to create amazing paintings based on the music he listened to.

Now there’s an idea for another article – paintings inspired by music! Any suggestions?!

Check out our Spotify playlist with songs from this article: