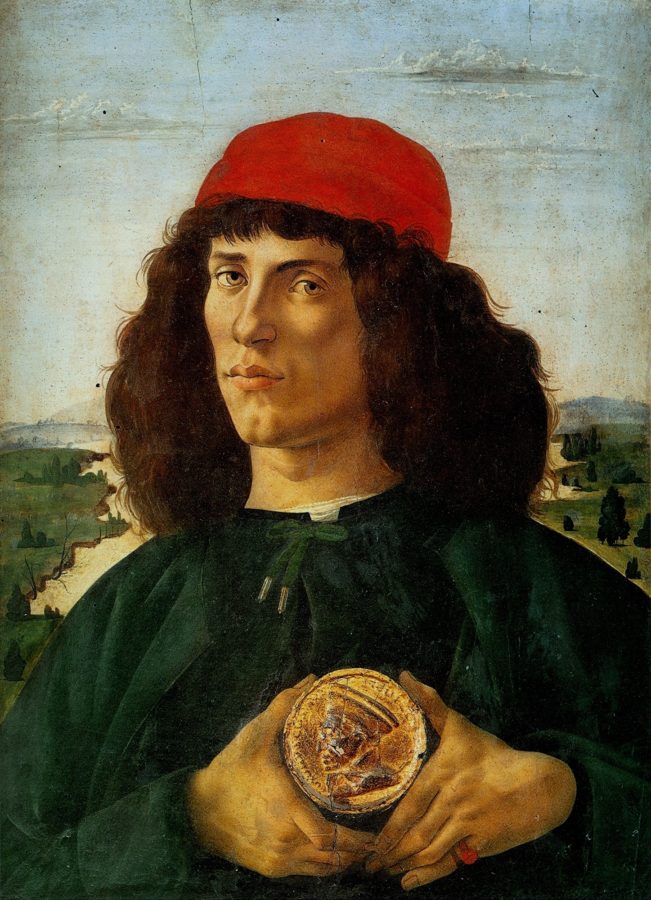 Sandro Botticelli – everyone knows his name and his The Birth of Venus and Primavera. This master of Early Renaissance belonged to the Florentine School under the patronage of Lorenzo de’ Medici, a movement that Giorgio Vasari would characterize less than a hundred years later in his Vita of Botticelli as a “golden age”. Here you will find all the information you should know about this legendary artist.

There are very few details of Botticelli’s life, but it is known that he became an apprentice when he was about fourteen years old, which would indicate that he received a fuller education than other Renaissance artists. By 1462 he was apprenticed to Fra Filippo Lippi. Many of Botticelli’s early works have been attributed to Lippi, and attributions continue to be uncertain. Influenced also by the monumentality of Masaccio’s painting, it was from Lippi that Botticelli learned a more intimate and detailed manner. What is interesting Botticelli could have traveled to Hungary, participating in the creation of a fresco in Esztergom, ordered in the workshop of Filippo Lippi by János Vitéz, then archbishop of Hungary.

2. He had great patrons

Among his patrons were Cosimo de Medici, Lorenzo the Magnificent and Pope Sixtus IV – one of the most powerful men of his times. The Pope summoned Botticelli to fresco the walls of the Sistine Chapel. The iconological program was the supremacy of the Papacy. Sandro’s contribution included the Temptations of Christ, the Punishment of the Rebels and Trial of Moses.

3. He was heavily impressed by Dante’s Divine Comedy

He wrote a commentary on a portion of Dante and illustrated the Inferno which he printed, spending much time over it, and this abstention from work led to serious disorders in his living – this is what Vasari wrote about his obsession for Dante.

4. He was under the influence of a mad prophet and that changed his art

In later life, Botticelli was one of the followers of the deeply moralistic friar Girolamo Savonarola who preached in Florence from 1490 until 1498. Some scholars claim that Botticelli’s art had transformed from the decorative to the deeply devout – The Mystical Nativity bears all the signs of this change. There is also a legend saying that he burnt his own paintings on pagan themes in the notorious “Bonfire of the Vanities”.

Savonarola was known for his prophecies of civic glory, the destruction of secular art and culture, and his calls for Christian renewal. He was excommunicated in May 1497, and threatened to place Florence under an interdict. A trial by fire proposed by a rival Florentine preacher in April 1498 to test Savonarola’s divine mandate turned into a fiasco, and popular opinion turned against him. Savonarola and two of his supporting friars were imprisoned. Under torture, Savonarola confessed that he had invented his visions and prophecies. On May 23, 1498, Church and civil authorities condemned, hanged, and burned the three friars in the main square of Florence.

5. Botticelli was not a one person… what?

It’s quite difficult now to decide on attribution of many “Botticelli-like” works. Some of them might have been created by the master himself, other by his workshop, other by his followers or copyists. In 19th century, when in certain circles it was very fashionable to own a Botticelli, a lot of false attributions have been made. The moral is: always sign your works, otherwise in the next hundreds years there will be problems.

6. He was a bachelor

Botticelli never wed, and expressed a strong disliking to the idea of marriage, a prospect he claimed gave him nightmares.

The popular view is that he suffered from an unrequited love for Simonetta Vespucci, a married noblewoman. The legend says she had served as the model for The Birth of Venus and recurs throughout his paintings, despite the fact that she had died years earlier, in 1476. Some modern historians have also examined other aspects of his sexuality. In 1938, Jacques Mesnil discovered a summary of a charge in the Florentine Archives for November 16, 1502, which read simply “Botticelli keeps a boy”, under an accusation of sodomy. The charges were eventually dropped.

7. But he loved to modify the female form

As actor Peter Ustinov once said -“If Botticelli were alive now he’d be working for Vogue”. Botticelli’s depictions of female subjects in his paintings are considered by some to be one of the first examples of ‘Photoshop’. He tended to lengthen his models’ arms, narrow shoulders, and pose them in such positions that would be impossible to sustain, were they real, thereby perpetuating an innately masculine idea of beauty and the female form.