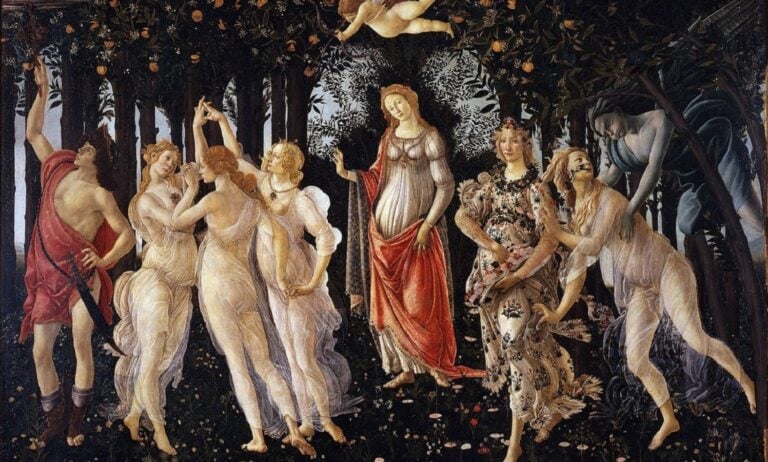 Primavera by Sandro Botticelli is one of the most famous paintings of the Renaissance. Its fame rests not just on its visual appeal but on the tangled story behind it and its unfathomable symbolism. Here are 7 things you may not know about this great masterpiece:

1. It was commissioned by a banker

Primavera, which also is known as “The Allegory of Spring” was painted for the powerful banking family – to be accurate, for Lorenzo di Pierfrancesco de’ Medici, a cousin of a famous Lorenzo the Magnificent. The Medici was a very important Florentine banking family and later royal house of Tuscany.

2. Lorenzo di Pierfrancesco may be painted on the scene

It is frequently suggested that Lorenzo di Pierfrancesco is the model for Mercury in the portrait, and his bride Semirande represented as Flora.

3. Primavera may be the same girl who was the model for Venus

It has also been proposed that the model for Venus was Simonetta Vespucci, the most beautiful woman who lived then in Florence, wife of Marco Vespucci and perhaps the mistress of Giuliano de’ Medici (who is also sometimes said to have been the model for Mercury).

There is one conception that seems to be quite sensible. According to it the painting as the realm of Venus, sung by the ancient poets and by Poliziano (famous scholar at the court of the Medici). On the right Zephyrus (the blue faced young man) chases Flora and fecundates her with a breath. Flora turns into Spring, the elegant woman scattering her flowers over the world. Venus, in the middle, represents the “Humanitas” (the benevolence), which protects men. On the left the three Graces dance and Mercury dissipates the clouds.

5. It has no official title

Yes, you’ve read me well. It was first called La Primavera by the art historian Giorgio Vasari who saw it at Villa Castello, just outside Florence, in 1550.

Especially the meadow is very naturalistically depicted. There are hundreds of types of flowers there.

7. It looks similar to the Flemish tapestries

All the details, symmetry, colors and motifs makes Primavera similar to Flemish tapestries that were popular at the time. It wouldn’t be weird, as the Medici’s where very powerful family and they had some connections with the Netherlands.