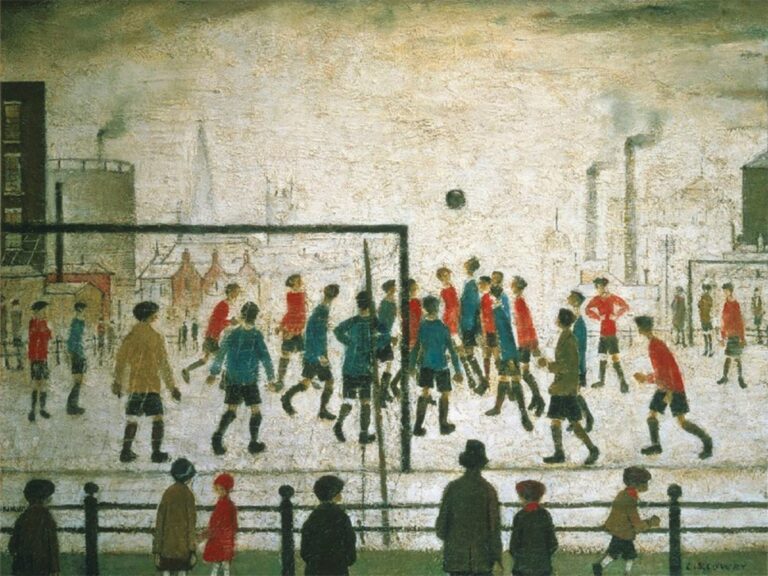 The FIFA World Cup begins in Russia on Thursday! Whether you’re fans of football, or you get bored watching the telly, it’s always fun to get carried away by the sport spirit, cheering for a favorite team. To start the Cup season with an artsy spin, we want to show you an English painter who depicted the atmosphere of the game in 20th-century England. It may not look so bright and cheerful as in today’s football ads, but the emotions stay the same. Let’s enter the game of LS Lowry!

Lowry was born in Stretford, Lancashire (now in Greater Manchester) where he lived all his life. Manchester dominates his work, as he is mostly famous for gloomy industrial landscapes of the city peopled with simple almost ‘matchstick’ figures (although he did many haunting portraits, too). Lowry worked as a door-to-door rent collector and clerk for a property company and painted mostly at nights after work. Even when his paintings became famous he didn’t stop working until the retirement in 1952. He was said to hate celebrity that his art brought upon him, as apparently he kept a suitcase by the door so that he could say he was just leaving should anyone pass by. Interestingly enough, however, Lowry never went abroad, he never even owned a car.

This painting characterizes football from before and after the second world war. It depicts a town called Bolton, where the working class flocked to every home game of Bolton Wanderers in Burnden Park. When the working week lasted five and a half-day, the destination of Saturday lunchtime for most people was invariably pub and then football. However, this lifestyle applied only to the industrial workforce, (the clerks still had long working hours) and soon football became the domain of the working class. This painting was bought by the Professional Footballers’ Association as an investment in 1999 and is now on loan to the Lowry Collection in Salford.

This painting entered a private collection in 1950 and it remained for more than 40 years. When the painting was being auctioned in 2011 (sold for £ 5.6m, a record for a Lowry), Philip Harley of Christie’s described it as “the ultimate work for passionate connoisseurs of Lowry’s work and of football”. As the painting looks down on a pitch situated before an industrial landscape, it captures the essence of Lowry’s famous works and it shows that Lowry’s real interest was the working-class life continued by the urban landscape.

The large format, panoramic, birds-eye composite view of Lowry’s own landscape perfectly captures the spirit and drama of a town gripped by the excitement of the Saturday football match, said Harley.

What would Laurence Stephen Lowry have made of the modern football?