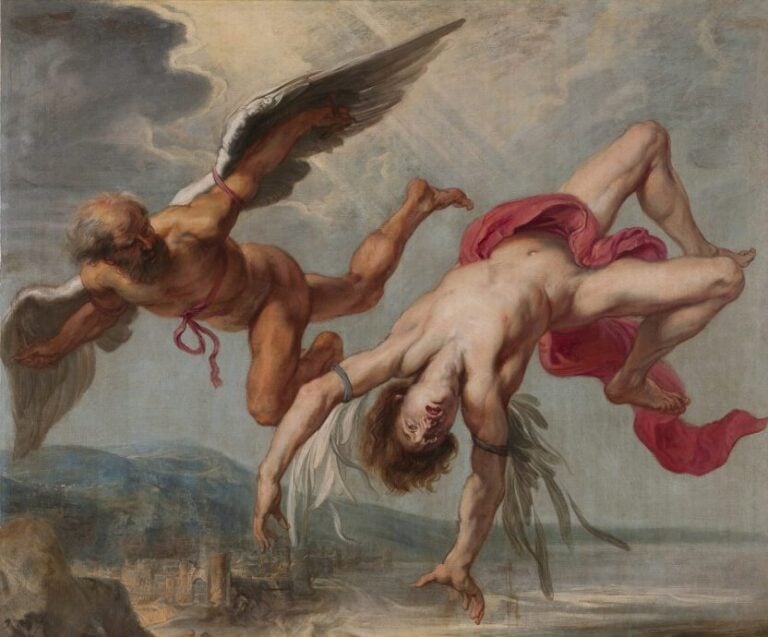 Artists need to choose the techniques that help them communicate the desired feelings. Scenes from mythology tell stories with emotions described in another form of art – literature (or spoken traditions), the art of words. Fall of Icarus is a tragic story with a lesson of what happens when humans overreach their limits.

To achieve the feeling of that mythological scene, artists needed to add some drama. Although there are many depictions of the Fall of Icarus throughout history, one style stands out in the quality and intrigue of this particular scene in paintings: Baroque.

The great craftsman Daedalus once enjoyed favorable treatment from Minos, the legendary king of Knossos, on Crete. As Minos’ wife had an affair with a Cretan bull, she gave birth to a shameful monster, a human with a bull face named Minotaur. Deciding to jail the Minotaur, Minos hired Daedalus to build a confusing structure, a labyrinth, from which the monster would never find a way out. However, at some point, Daedalus had to flee away from Crete, and it was allegedly difficult to make it through the sea. His solution was to build wings for himself and his son, Icarus.

In his monumental and dramatic manner, as is common of Baroque artists, Charles Le Brun depicts Daedalus and Icarus as the other attaches the wings to his son’s body. The composition itself has mostly diagonal lines, one of the main characteristics of Baroque paintings. In fact, diagonal lines are generally perceived as “unstable” in human psychology. Most Baroque painters use them exactly to communicate that feeling.

As it happens with many myths, there are numerous versions of how this story exactly happened. The most popular reference to the Fall of Icarus comes from the Roman poet Ovid and his work Metamorphoses. Although other ancient authors tell slightly different stories, Ovid’s is the most widely translated and distributed, resulting in the most artistic depictions showing the Fall of Icarus as described in this work.

According to most sources from ancient literature, Daedalus was a great Athenian craftsman, inventor, and architect. However, he was also vain and envious. After he was found guilty of killing his incredibly talented nephew, he fled Athens with his son Icarus, in order to avoid serving a sentence.

They settled on Crete. After some time, Daedalus either fell into disfavor with the powerful Minos due to his Athenian bonds, or he just didn’t want to be on a distant island anymore. He collected eagles’ feathers and used wax to stick them together. That way, he created wings that were big enough for a person to fly with. In fact, flying was always one of humanity’s biggest ambitions, and it remained so for quite a long time.

Icarus was merely a playful and ambitious boy. He enjoyed flying a bit too much, coming too close to the sun. As a result, the wax on his wings melted, the feathers decomposed, and he fell into the deep sea. Once Daedalus noticed what happened to his son, it was too late. This story is the very origin of the proverb, “don’t fly too close to the sun”.

Icaria, the Island of Icarus

After that, the myth says that Daedalus landed on a shore and prayed to Poseidon to give him the boy’s body so that he could bury him with dignity. His prayers were listened to. The area of the Aegean sea where Icarus fell would later be called the Icarian Sea. The island where Daedalus allegedly buried his son will later become Icaria.

Nowadays, the island of Icaria is known for its longevity and slow lifestyle. It is the exact contrast to the wildly impatient nature of the young Icarus. Nevertheless, the cliffs and unwelcoming coasts of this island just complete the picture about the drama of this story and its artistic depictions.

Many art teachers try to motivate students to focus on gesture drawing as a starting point of the figure drawing process. That is, they want students to start by observing dynamism and movement before thinking about volume, proportions, shadows, and anatomy.

The figure in the air is one of the finest examples of how to look at the gesture through kinetic energy. Fall of Icarus by Jacob Peter Gowy, a close collaborator of Peter Paul Rubens, is a particularly dramatic scene of Fall of Icarus. At the base of this work is the ability to communicate, or even exaggerate the action line as a base of the gesture. After making sure that the action line works, the artist gave us additional messages such as facial expressions and the sharp contrast between the body with working wings in the air and the falling body.

Additionally, a few human figures far away on the shore seem to pay no attention to Daedalus and Icarus. They turned their backs to the scene.

Etching was quite a popular artistic medium in the 17th century. Its greatest masters made sure to engrave the finest details, such as decomposing pieces of Icarus’ feathers.

In contrast, the work of Italian Baroque painter Carlo Saraceni gives us a closer resemblance to Ovid’s version of the myth. In Metamorphoses, there is a clear mention of peasants who observe the tragic event with a sense of shock, instead of just minding their own business.

The figures come clearly in front, as the main topics within the composition, while observers remain in the shadow pointing at the scene.

The composition is placed into an imaginary landscape. The observers’ clothes are contemporary for the artist. Saraceni was one of the Carravaggisti, the painters influenced by Carravaggio, the painter many consider to be the initiator of the Baroque. Additionally, Saraceni’s style belongs to the tenebrism artistic style (tenebroso is another word for chiaroscuro, meaning dramatic contrasts between light and shadow).

Ikaria, the Guide to the Archaeological Museum of Agios Kyrikos, Hellenic Ministry of Culture and Sport, Ikaria, 2014.