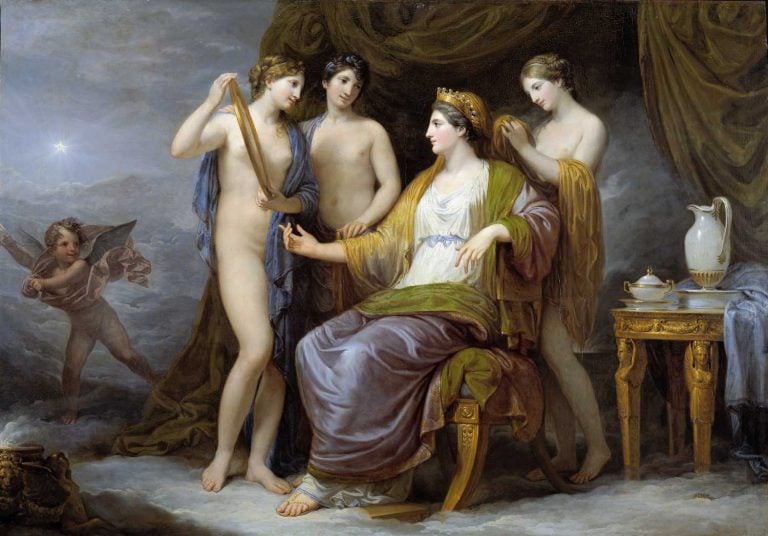 Most people have heard stories of the most famous Greek gods and heroes: Zeus, Poseidon, Hercules, Hades, etc. But what about the tales and woes of mythical women? Ranging from clever queens to murderous witches, this is a look at five of the most interesting and powerful women in Greek mythology.

Hera, the wife of Zeus, ruled as queen of the gods. Although she was the goddess of marriage, childbirth, and family, don’t let that fool you; she became famous for her relentless jealousy and vengeful plots towards her husband. And she had good reason. Zeus continually slept around despite Hera’s disapproval and fathered numerous other children.

While there are countless stories about Hera exacting revenge on Zeus or his mistresses, one of Hera’s most daring moments came when she started a rebellion against Zeus. Hera was not only upset that her husband was consistently unfaithful, but she was also bitter that Zeus had tricked her into marrying him in the first place. One day, when Zeus had been especially harsh on the other gods, Hera seized the moment and fearlessly convinced and intimidated the rest of Olympus to rebel against her husband, their king, a rather impressive feat in itself. The myth changes a little based on who tells it, but Hera may have even drugged Zeus until he fell unconscious.

Unfortunately, as Hera and the others snuck up on the snoring king, planning to steal his lightning bolt and tie him to the couch, Thetis, Achilles’ mother, called in Zeus’ hundred-handed bodyguard to put an end to their coup.

Zeus, enraged that his wife was bold enough to organize a revolt against him, chained her to the sky with golden bracelets until she swore never to undermine him again. A promise she swiftly broke, but that’s another story.

Medea was a powerful witch, famous for helping Jason and the Argonauts steal the Golden Fleece from her father, King Aeetus. She fell in love with Jason the moment she saw him, so when Aeetus gave Jason a series of impossible tasks to complete in exchange for the fleece, Medea decided to help him out. She gave him a special salve to protect him against the flaming breath of two bulls he had to yoke along with several life-saving tips, allowing him to complete the challenges unscathed. When her father then failed to keep his promise and hand over the fleece, Medea single-handedly slew the dragon that guarded it. It actually seems a little weird that Jason gets all the credit when Medea did all the hard work.

After betraying her father and her kingdom, Medea decided to leave her home behind and sailed away with Jason. Enraged, her father and his men chased them across the ocean, managing to stay right on their tail. To slow them down, Medea cut her younger brother to pieces and spread them out into the waves. She knew that her father, overcome with grief, would be forced to stop and fish them out.

After a decade of marriage and several other life-saving miracles from Medea, Jason left her for another princess. Overcome with grief and a desire for vengeance, Medea gave the bride a poisoned dress. When Jason’s wife-to-be put it on, she died. Medea then buried her and Jason’s children alive, destroying everything he loved and his best chance of continuing his family line. Then she flew away on a dragon.

So, she was a little extreme… It doesn’t mean she wasn’t also badass.

Agamemnon, the famous commander in the Illiad, was determined to sail to Troy with the Greeks and avenge Helen’s abduction. But the gods were pretty set against it and refused to produce any wind for the Greek ships. Agamemnon realized he had to do something drastic if they were going to have any chance of getting to Troy. He eventually tricked his daughter Iphigenia to meet him by the temple of Athena, telling her that she was going there to marry Achilles. When Iphigenia got there, he killed her and sacrificed his daughter to the gods in exchange for strong winds.

Clytemnestra, Agamemnon’s wife, never forgot her daughter’s murder nor her husband’s years-long abandonment. She began sleeping with Aegisthus during the decade that Agamemnon fought in Troy. Over the years, Clytemnestra and Aegisthus quietly took over the kingdom. When Agamemnon cheerily returned home, expecting to be celebrated and adored by his wife, Clytemnestra swallowed her pride, played it cool, and slyly invited Agamemnon to a feast indoors. She drew a bath for him to clean up before the celebration. The moment he stepped into the water, she threw a blanket over him and stabbed him to death.

After the somewhat grisly murder, Clytemnestra and Aegisthus ruled over the kingdom for another seven years.

Atalanta’s father dreamed of a son, and when her mother bore a daughter, he was so upset that he abandoned the baby in the forest. Atalanta was saved when a she-bear found her and took the girl as her own. Atalanta grew into a fierce huntress and had several heroic adventures.

When a nearby king neglected to include Artemins in an important sacrifice, the goddess felt scorned and sent a Caledonian Boar to wreak havoc on the kingdom. Atalanta joined a group of famous heroes tasked with killing the monster, even though most of them were really annoyed that a woman dared take part in such a dangerous task. After many of the men had been killed, Atalanta proved her worth as a hunter and was the first to successfully draw blood from the beast.

Perhaps the most famous story of Atalanta is her footrace. Atalanta’s father rediscovered her after the boar race and decided that she ought to get married. She, uninterested in marrying anyone, challenged all of her suitors to a footrace. Any man who beat her could marry her. Anyone who lost would be killed. Looking at the mounting body count, Hippomenes, the grandson of Poseidon, asked Aphrodite for help. Aphrodite gave Hippomenes three irresistible golden apples. Every time Atalanta began to overtake Hippomenes in the race, he would throw a golden apple behind him. Overwhelmed by the desire to touch them, she was forced to run after each one. Hippomenes thus became the only man able to outrun Atalanta and even he nearly lost.

Circe was a beautiful and powerful enchantress who fell in love with Odysseus when he and his men washed ashore on her island. She welcomed him and his fellow soldiers to her home and treated them to a glorious feast. Just before entering her palace, Hermes came to Odysseus and gave him a special herb, advising him to eat it before touching any of Circe’s food.

Odysseus ate the plant, making him immune to the magic Circe had put into the dinner. Unfortunately, the rest of his men weren’t so lucky, and Circe’s potion promptly turned them into animals. On the advice of Hermes, Odysseus drew his sword on Circe, threatening her life unless she returned his men to their true forms. Impressed, she convinced him not to attack her and after freeing his men from the curse, Odysseus and Circe lived together for almost a year.

Even after so much time had passed, his men struggled to convince Odysseus to leave Circe. After saying their reluctant goodbyes, Circe did everything she could to help him on his journey. She even told him how to get to the underworld and back, something no other mortal had ever done before.

So, although she was an enchantress with a habit of turning men into animals, she was incredibly generous to Odysseys and his men and an important ally in their quest to return to Greece.

Lauren Dorsey is a college student at Dartmouth majoring in Classics and Art History. Some of her favorite pastimes include translating Latin, wandering in the outdoors, practicing her cross-cut, and writing about art!

You can find out more about Lauren at her Instagram and her LinkedIn.