Painting of the Week: Pieter Bruegel the Elder, Landscape with the Fall of Icarus 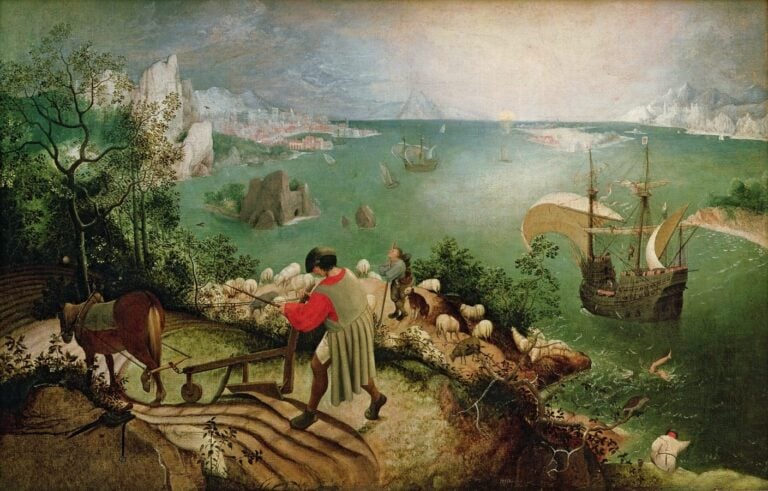 Landscape with the Fall of Icarus, Pieter Bruegel the Elder (after?), c. 1560, Royal Museums of Fine Arts of Belgium, Brussels

A ploughman is plowing the lands, a shepherd is watching over his sheep, an angler is fishing. The ships are sailing to unknown lands, a partridge is sitting on the branch of a tree, the sun is going down. Everything is ordinary and is happening at its own regular pace. The boredom of this everyday life scene can be suffocating. But when we direct the eye to a certain spot in the water, just below the ship, we can see the real, hidden drama – the legs of Icarus, a young man who became the victim of his own hubris. In Greek mythology, Icarus succeeded in flying, with wings made by his father Daedalus, using feathers secured with bees wax. Ignoring his father’s warnings, Icarus chose to fly too close to the sun, melting the wax, and fell into the sea and drowned.

Landscape with the Fall of Icarus was long thought to be created by the leading painter of Dutch and Flemish Renaissance painting, Pieter Bruegel the Elder. The composition is so dazzling that numerous curators identify it as one of the famous painter’s creations. However, technical examinations from the 1990s caused the attribution to be regarded as very doubtful, and the painting, perhaps painted in the 1560s, is now usually seen as a good early copy by an unknown artist of Bruegel’s lost original, perhaps from about 1558. There are two arguments for that thesis – the painting is in oil whereas Bruegel’s other paintings on canvas are in tempera. The other thing is that the specialists see it to have a relatively weak quality compared to other Bruegels, although this question is complicated by later overpainting. The label on the museum wall for the painting includes a question mark just after Bruegel’s name.

The story of Icarus was popularized by the Ovid’s Metamorphoses – the ploughman, the shepherd, the angler and even the partridge are mentioned there (there is a long off topic regarding the bird – Daedalus, responsible for educating his nephew, becomes jealous of his pupil’s precocious talent, so he pushes him from the top of a sacred citadel. Pallas, Goddess of Wisdom, intervenes and transforms the child into a partridge to save him. You know, that was just a regular greek mythology type of drama). So, according to Ovid, the other protagonists of the scene are “astonished and think to see gods approaching them through the aether” but in this painting, we notice that they don’t seem to care. There is a Flemish proverb (and as you may know, Bruegel was a huge fans of the proverbs, he created paintings built entirely out of their visual representations): “And the farmer continued to plough…” (En de boer … hij ploegde voort”) pointing out the ignorance of people to their fellow man’s suffering. And it seems that this is what we see here – a representation of humankind’s indifference to Icarus’ death. But why would anyone loose focus on his own ordinary life and be distracted by the tragic death of Icarus, who wanted to fool nature?

The work was bought by the museum in 1912. In 1953 another version on panel, generally considered inferior, turned up and was acquired by Daniel van Buuren for his private house, today a museum in Brussels. In this we see the character missing in the previous version of the painting – Daedelus, who is still in the air. Also, the shepherd’s gaze is directed at him, just like in Ovid’s story.

Anyway, even though most probably it is not a real Bruegel, you can’t take your eyes off it while you look at it. Don’t miss it when you visit The Royal Museums of Fine Arts in Brussels.

To finish, there is one disturbing detail painted on the Royal Museum of Fine Arts’ version which makes the whole scene a bit surreal – the sun is setting. Icarus’ wings were supposed to be burned because of the rays of the sun – how could that happen if the sun is disappearing over the horizon? Furthermore, the sun does not correspond to its own reflection in the sea. At the same time, the sun in van Buuren’s version is at its zenith. All that leads us to the conclusion, that most probably the sun in the first painting was, without any logical reason, added later. Maybe to create a more picturesque view?