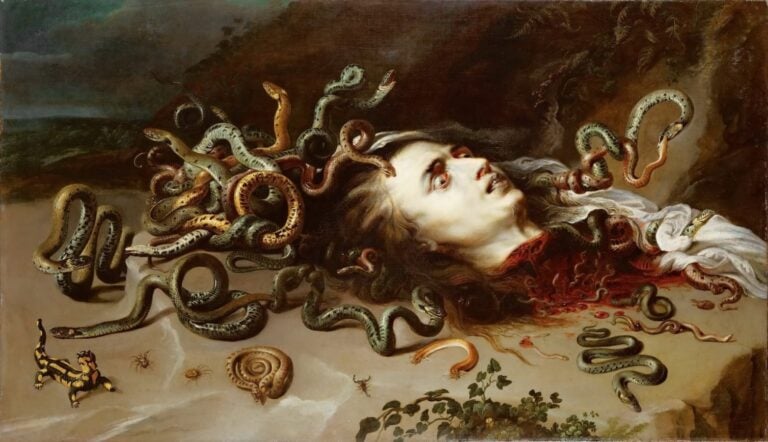 Gods, goddesses, demigods, horrible monsters, and beasts of hybrid forms roam the world of Ancient Greek mythology. Their heredity shaped many of the fictional and fantastical creatures of our time. From Sirens that lure sailors to their deaths by their sweet voice, the ravenous Sphinx guarding the entrance to a city, and evil Lamia who has an insatiable appetite for the flesh of small children. These Greek mythological creatures that combine female beauty with beastly ugliness have been titillating fantasies of generations of artists and have inspired them to create their well-known masterpieces. Here is a list of the most popular creatures and famous artworks devoted to them.

Arachne was the daughter of a shepherd and a talented weaver who challenged Athena, the goddess of wisdom and craft, to a weaving contest. There are several versions of the story with different accounts of who won the contest, but whatever the result, it never seems to end in Arachne’s favor. In Ovid’s version of the myth, Arachne, far more superior in her craft, defeats Athena. However her weaving depicting how gods mislead and abuse mortals enrages Athena, and, for insulting gods and comparing herself with them, the goddess turns the girl into a spider.

The 19th-century French artist and printmaker Gustave Doré produced a print illustrating the torments of Arachne for Dante’s Divine Comedy.

Half woman and half bird, these creatures first appeared in Homer’s Odyssey. Their enchanting voices allure sailors to their doom to nearby rocks, sandbars, and shoals. Homer wrote:

“First you will come to the Sirens who enchant all who come near them. If anyone unwarily draws in too close and hears the singing of the Sirens, his wife and children will never welcome him home again, for they sit in a green field and warble him to death with the sweetness of their song. There is a great heap of dead men’s bones lying all around, with the flesh still rotting off them.”

It is often considered that Sirens might have inspired the creation of Mermaids, another popular mythological creature. Works of the 19th-century artist John William Waterhouse show scenes from Greek mythology in a romanticized manner. Regardless of how horrid the creatures are, the females in his works are always beautiful and gracious.

Harpies are also creatures with the head of a woman and the body of a bird, but compared to Siren, they are known to be much more horrid and evil. They are one of the guardians of the Underworld – the realm of the god Hades – and agents of punishment who abduct and torture people. When a person suddenly disappeared from the earth it was said that he or she had been carried off by the Harpies. The Roman poet Virgil describes Harpies in his Aeneid as:

“Saved from the sea, the Strophades we gain,
So called in Greece, where dwells, with Harpies,
Heavenly ire
Ne’er sent a pest more loathsome; ne’er were seen
Worst plagues to issue from the Stygian mire
Birds maiden-faced, but trailing with obscene,
With taloned hands and looks for ever pale and lean.”

The famous artist Edvard Munch, who painted the iconic Scream, is also known to favor eerie, uncanny, and mystical subjects. Below is his sketch depicting a Harpy extending her claws over, evidently, a deceased body.

According to Ovid’s Metamorphoses, Scylla was a beautiful ocean nymph. The sea god Glaucus fell in love with her, but Scylla, repelled by Glaucus’ fishtail, fled to the dry land away from him. Desperate, Glaucus goes to Circe, daughter of the Sun, for a love potion. Circe falls in love with him though and, out of vengeance and jealousy, prepares a potion for Scylla that turns her into a monster so scary that even she couldn’t bear to look at it.

Since then, Scylla inhabits the sea strait near current-day Sicily, and her counterpart Charybdis dwells in the open sea. Whoever sails in those waters has to make a tough decision to either be devoured by Scylla or get ship-wrecked by Charybdis. This deadly duo makes an appearance in Homer’s Odyssey. Odyssey chooses to sail closer to Scylla and sacrifices six of his men.

In the following artwork by Peter Paul Rubens, you can see the encounter of Scylla and Glaucus before the horrid events ensue.

While the description of Gorgons varies across Greek literature, the earliest source defines them as three sisters, Stheno, Euryale, and Medusa, who had hair made of venomous serpents. Whoever looks them in the eye immediately turns into stone. Whilst two of the sisters, Stheno and Euryale are immortal, Medusa, on the other hand, is slain by the hero Perseus. According to the legend, Perseus was given a shield by the goddess Athena and a scythe by Hermes, emissary, and messenger of the Greek gods. He chopped off Medusa’s head with the scythe, looking only at her reflection on the shield.

The disembodied head of Medusa is a common theme in art and craft, and in the work below the gruesome sight has been captured by Peter Paul Rubens.

Gorgons are also sisters of our next heroines, Graeae. Pronounced as /ˈɡraɪiː/, meaning “grey witches”, they are three sisters, Deino, Enyo, and Pemphredo. Together they share one eye and one tooth for three of them and they also possess the power to look into the future. We’ve all become familiar with them as ugly old women from the popular Disney animated film Hercules. However, in some variations of the myth, they were described as “fair-cheeked” or as “half-swans”. In the legend of Perseus, the hero steals their eye and forces them to give out the location of three items needed to kill their sister Medusa.

An advocate of Classical beauty and member of the British Pre-Raphaelite movement Sir Edward Burne-Jones gave the sisters an appealing and romantic appearance in his following work.

Mormos are the Ancient Greek great-grandmothers of one of, if not the most popular mythical creature – vampires. In Greek mythology, they were first described as companions of Hecate, the goddess of magic, herbs, ghosts, and necromancy. Mormos were described as female, vampire-like creatures that came after misbehaving Greek children. They also assumed the forms of beautiful women to lure young men into their beds to then feed on their flesh and blood.

The most iconic female vampires in popular culture are unarguably fruits of Bram Stoker’s archetypal novel Dracula and its 1992 namesake screen adaptation by director Francis Ford Coppola. In art, however, the most famous painting of a vampire might be Edvard Munch’s Vampire. A version from the year 1894 fetched over $38 million at an auction in 2008.

The sphinx is most commonly known as a creature with a man’s head and the body of a lion, guarding the ageless pyramids of the Egyptian pharaohs. However, the Greeks adopted this mythical creature into their literature as a treacherous and merciless monster with the head of a woman, the haunches of a lion, wings of an eagle, and a tail with a serpent’s head. It guarded the entrance to the Greek city of Thebes and asked a riddle of travelers who wished to enter the city. Anyone who failed to answer was eaten alive. British poet Oscar Wilde even devoted a tantalizing male-fantasy poem The Sphinx to this mythical creature:

“In a dim corner of my room for longer than my fancy thinks
A beautiful and silent Sphinx has watched me through the shifting gloom […]
Come forth, my lovely seneschal! so somnolent, so statuesque! Come forth you exquisite grotesque! Half woman and half animal! […]
And let me touch those curving claws of yellow ivory and grasp
The tail that like a monstrous Asp coils around your heavy velvet paws! […]
Who were your lovers? Who were they who wrestled for you in the dust?
Which was the vessel of your Lust?
What Leman had you, every day?
Did giant Lizards come and crouch before you on the reedy banks?
Did Gryphons with great metal flanks leap on you in your trampled couch?
And from the brick-built Lycan tomb what horrible Chimera came
With fearful heads and fearful flames to breed new wonders from your womb? […]
Your horrible and heavy breath makes the light flicker in the lamp,
And on my brow I feel the damp and dreadful dews of night and death.”

According to Greek mythology, Lamia was a beautiful woman and a mistress of the god Zeus. Zeus’ jealous wife Hera kills all of her children and transforms her into a monster that hunts and eats the children of others. There are several versions of the story, as well as of her appearance. Some describe her as having a serpent tail below her waist, meanwhile in others, as seen in John William Waterhouse’s painting, Lamia has snakeskin wrapped around her arm and waist. She is also Mormo’s sister. If you really think about it, Greek mythology is a story of one big, extended, dysfunctional family, isn’t it?