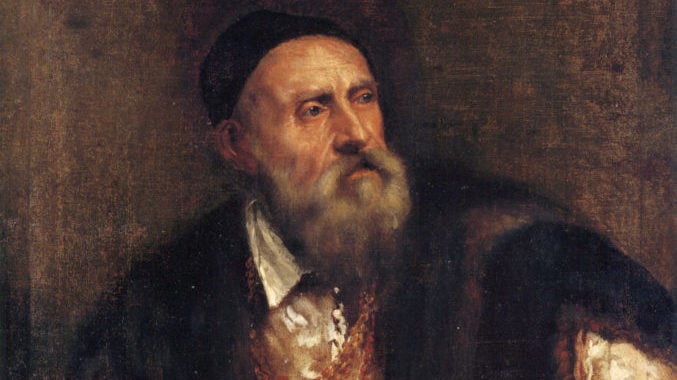 In the 1550s and early 1560s Titian delivered a series of seven large canvases to King Phillip II of Spain. Each translated a small section of the Epic poem Metamorphoses, by Roman poet Ovid, into paint. Titian coined the term “Poesie” to describe them: paintings which are poems.

People consider these seven “Poesies” as some of Titian’s most magnificent work and accordingly we shall meet each Poesie in turn, in a series of articles. Before we begin – let’s get up to speed with Titian:

The Early Career of Titian

Titian was born around 1490 in Pieve di Cadore, a small town at the foot of the Alps. By the time the young artist was launching his independent career in Venice, he had few rivals.

In 1511 Titian painted frescoes in Padua and then started to become known as a portrait artist, garnering him aristocratic clientele. In his early career he also painted prestigious religious paintings, such as the alter-piece at the church of Santa Maria Gloriosa dei Frari in Venice (1518). The style of this piece nodded to High Renaissance artists such as Raphael and Michelangelo in the North. In addition it was a revolutionary design because the Assumption of Mary was not declared an article of faith until 1950.

The Poesies for Phillip

Titian’s establishment as the one-to-watch among the upper echelons of Italian society reached a high point when he met with the Holy Roman Emperor Charles V in 1530. This propelled him into the imperial court and led to the royal commission of paintings from Ovid in the 1550s.

Titian, in fact, offered the series of Ovidian poetry-paintings to the Pope, but was turned down. He met Phillip II of Spain in Milan and Augsburg, both times painting the prince’s portrait, and presumably confirming the ambitious project.

There was total freedom to choose which myths from the Metamorphoses to depict; and in the upcoming article, you will get to know about the first story that Titian chose: Danaë (1549-50). Visit DailyArt Magazine to find it!