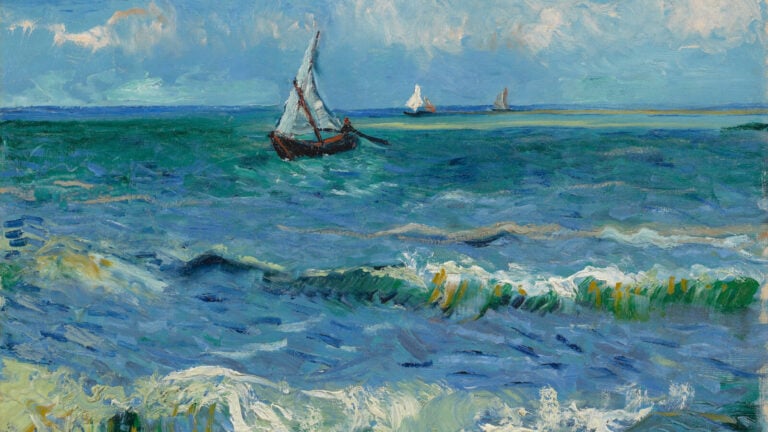 Vincent van Gogh is one of the most popular painters of all-time. He dominates Post-Impressionism. He fills art books. He inspires modern viewers. His visual complexity was as deep as his mental complexity. Seascape near Les Saintes-Maries-de-la-Mer is from the permanent collection of the Van Gogh Museum and is often overshadowed by Van Gogh’s more popular works such as The Starry Night. Let us explore this expressive image. Let us explore this Van Gogh painting.

Vincent van Gogh sold only a few paintings during his lifetime. The cliché of the starving and struggling artist could easily be applied to many years of his life. Van Gogh was not a financially successful artist despite his wildly popular reputation after his death. Sadly, Van Gogh never knew the global reputation he would one day achieve. The irony is that while the few paintings he sold during his lifetime were for meagre prices, now his paintings easily fetch tens of millions of dollars. A record-setting example is his Portrait of Doctor Gachet, which sold on 15 May 1990 in 3-minutes for 82,500,000 USD to a Japanese collector. Quite a stark and ironic contrast to Van Gogh’s personal experience!

Seascape near Les Saintes-Maries-de-la-Mer is one such painting that remained with Vincent van Gogh until his death and later acquired by the Van Gogh Museum. It is a beautiful symphony of blue, green, and white with dashes of yellow and red. The vibrant colors of the Mediterranean Sea are expressively applied with thick and textured strokes.

Vincent van Gogh abandoned the paintbrush when he painted Seascape near Les Saintes-Maries-de-la-Mer in June of 1888, and instead used a palette knife. The knife allowed unmixed paint to be smeared and layered to form an impasto. This impasto adds depth to the painting because the physically thick paint layers can add shadows and dimension to the flat canvas. The unmixed paint found in some areas of the scene also intensify the colors’ vibrancy. Unmixed reds clash against unmixed greens. Pure white pops against pure blue. A cacophony of color echoes the crashing sounds of the waves. Energy and movement are felt in the work.

The dazzling intensity of Seascape near Les Saintes-Maries-de-la-Mer is achieved through Van Gogh’s handling of line, pattern, form, and color. Lines are sometimes sharpened or blurred depending on where they are found. Patterns are established in the rhythmic succession of waves moving toward the viewer. Forms are expressed through highlights and shadows. Colors are used throughout – sometimes harmoniously, sometimes harshly.

Vincent van Gogh is commonly known to have suffered from mental illness. He is mad, crazy, and insane in the popular imagination. He cut off a portion of his left ear, what could be more disturbed?

He was more complex than the “crazy artist” he is sometimes scathingly dismissed as. Van Gogh was a tormented spirit who suffered from epileptic seizures. He moved to the south of France for his health and lived for some time in Arles in 1888. Nearby Arles is Les Saintes-Maries-de-la-Mer. It is 38 km south of Arles and lies on the Mediterranean Sea alongside more famous cities such as Saint-Tropez, Cannes, and Nice.

Vincent van Gogh frequently painted en plein air, or outdoors, and Seascape near Les Saintes-Maries-de-la-Mer is such an example. It is verified that the artist painted this scene on the beach because sand has been found in the dried paint layers. Painting en plein air was very popular with non-studio painters, and it has therapeutic elements too with its associated sunshine, fresh air, and open spaces. Perhaps Van Gogh painted Seascape near Les Saintes-Maries-de-la-Mer as part of a casual art therapy routine? He was noted as using his paintings to express his emotions and mental states.

Whatever his final intentions might have been, one thing is apparent: he was definitely proud of this work. In the bottom left corner, he boldly signed the work in warm red paint against the cool green sea. It is simply “Vincent,” and it almost has an iconic simplicity like a modern pop singer known by one single stage name.

Vincent, thank you for painting Seascape near Les Saintes-Maries-de-la-Mer. The world is more beautiful for it.