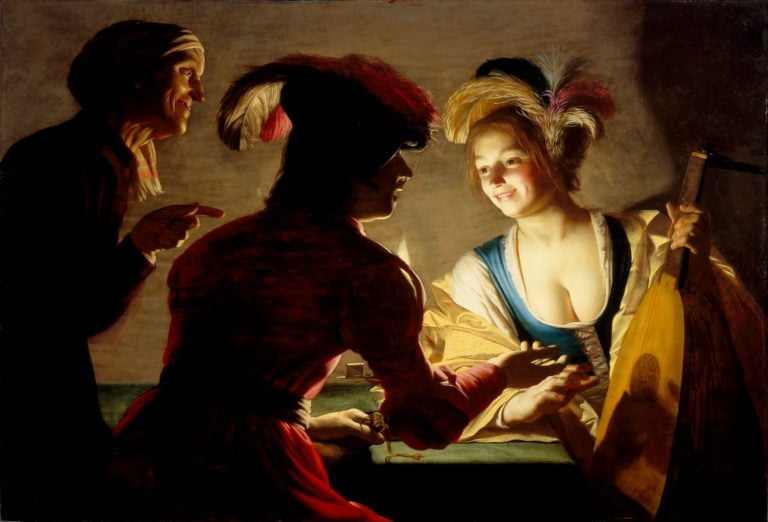 The Baroque movement, which characterizes much of the European art of the 17th century, is known for its dramatic flair. Gods, demigods, and saints fill the canvases expressing their plight with exaggerated facial expressions and postures. But apart from that, artists had another tool to induce the drama of the scene: lighting – and in this case – tenebrism.

So, what is Tenebrism?

Tenebrism is a lighting technique that is characterized by extreme contrast of light and dark to heighten dramatic effect. The word tenebrism comes from the Italian word tenebroso which means dark or gloomy.

And what is the difference between tenebrism and chiaroscuro?

To understand tenebrism, we have to know what chiaroscuro is. Chiaroscuro is another Italian lighting technique that manipulates light and dark. The difference with tenebrism is that in chiaroscuro the contrast created is much gentler and used to achieve realism and three-dimensionality, instead of the dramatic effect that tenebrism strives for. The Italian painter Caravaggio was the true master of tenebrism. The technique is so linked with him that some call it caravaggism as well. But enough with theory, let’s look at some art.

The Calling of Matthew shows, in Caravaggio’s characteristic style, the moment Jesus called Matthew to be one of his students. To the right, we see Jesus and Peter, the younger figure with the raised hand being Jesus. If we follow that hand, we arrive at the table where Matthew, the man with the red beard, is sitting with some of his colleagues, counting money as he was a tax collector.

Even though it is a moment of great spiritual awakening, Caravaggio kept everything realistic and close to his time. The faces and clothes of the figures are contemporary to the artist’s time, making it easier for the mostly illiterate flock to understand the painting.

Of course, the most important element in the picture is how Caravaggio manipulates light. A sunbeam enters from the right and paces through the room acting like a spotlight on Jesus’ raised hand and Matthew’s astonished face, as to make clear what this painting is about and to add drama. Most of the rest of the scene lies in darkness.

Caravaggio’s tenebrism inspired many artists in Italy, among those were Orazio Gentileschi and his daughter Artemisia. Artemisia Gentileschi is one of the first female Renaissance artists that had their work rediscovered and studied.

Perhaps her most famous work is her rendition of the story of Judith and Holofernes. Caravaggio worked on the same subject, but Gentileschi managed to make her version even more gruesome. To her aid, of course, she has the stark differences of light and dark to add drama and highlight what she deems important, like the determination on the women’s faces and the strong musculature of the man.

It seems impossible to write about tenebrism without mentioning Caravaggio over and over again. However, his groundbreaking style left the borders of his home country to spread across Europe. The Caravaggisti, as his followers are called, come from many European countries like The Netherlands, France, and Spain.

In Utrecht, in the Netherlands, an artistic group was formed by artists inspired by the Italian master’s technique. The Utrecht Caravaggisti mainly painted genre scenes like The Procuress by Gerard van Honthorst. On the canvas, the three figures are illuminated only by a single candle. The light falls hard on the young woman, a prostitute, highlighting her low cleavage. On the other hand, the man’s face is dimly lit, mainly due to his position. Next to him, the procuress tries to convince him to make an offer on the girl. It seems that she is successful as he already has his moneybag out.

Spanish-born painter Jusepe de Ribera made his way to Italy in the early 17th century, never to return to his home country. After a short stay in Rome, he moved to the Kingdom of Naples, then a Spanish territory, but also Naples was a city that Caravaggio spent much of his time in.

The influence of tenebrism and Caravaggio on his work is undeniable. A distinct example is his Martyrdom of Saint Andrew and its similarity to Caravaggio’s Crucifixion of Saint Peter.  The harshly lit saint intensifies the drama, but also the realism in the depiction of the saint’s body. Many other elements like the strange viewpoint or the placement of the figures point to the Italian master’s work.

Tenebrism is often associated with a type of painting where the sole lighting source is the light of a single candle, again creating extreme differences between light and dark. This is called the candlelight tradition.

Characteristic of that style is the work of French artist Georges de la Tour. In his Penitent Magdalene, the saint sits in quiet contemplation in front of a mirror, a symbol of vanity. The whole scene is lighted by the candle on the table, creating the desired effect. However, in this case, the extremities in lighting are used to create a mood or atmosphere instead of adding drama.

All in all, even though tenebrism began in Italy with the works of Caravaggio, the influence of the style of Italian painter was so widespread that soon traveled beyond the borders of his homeland to inspire the works of artists in many European countries.