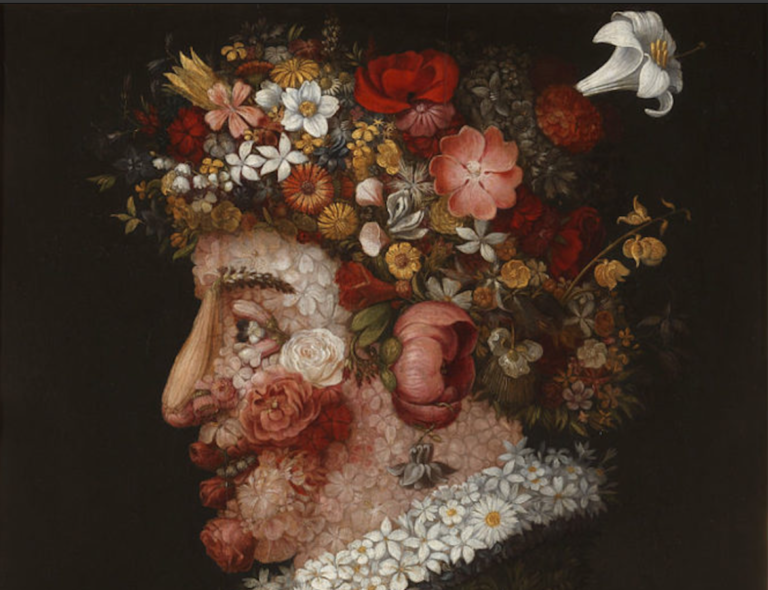 Giuseppe Arcimboldo was the king of Mannerism. If you see a portrait made of plants, vegetables, books, animals and generally speaking, stuff – you can be sure it’s Arcimboldo. These portraits were an expression of a Renaissance mind’s fascination with riddles, puzzles, and the bizarre.

Mannerism was a style in European art that was full of weirdness and exaggeration. Sophistication and artificiality were its second name. It favored compositional tension and instability. It favored everything that was as far from Renaissance balance and clarity as possible.

Giuseppe Arcimboldo (1526–1593) began his career as a designer of stained glass windows for the Duomo of Milan, then he moved to Prague, where he became one of the favorite court painters to the Habsburg Emperors Maximilian II and Rudolf II. The story of Rudolf II needs a separate article but for now, you should know that he was one of those quirky rulers who had mental health issues, he was quite bad at politics but put tons of money into art and collecting.

Rudolf’s famous Kunstkammer (the cabinet of curiosities) was full of works by Dürer and Brueghel and great masterpieces of both Northern and Italian Renaissance. But Rudolf’s passion for collecting went far beyond paintings and sculptures. The Emperor commissioned objects of all kinds: ceremonial swords, musical instruments, mechanical objects (clocks, waterworks, astrolabes, compasses, telescopes) – all of those produced by the most prominent craftsmen in Europe.

Giuseppe Arcimboldo painted the famous portrait of Rudolf made entirely of vegetables and fruits.

Vertumnus was the Roman god of metamorphoses in nature and life; the fruits and vegetables symbolize the abundance of the Golden Age that had returned under the Emperor’s rule and the perfect balance and harmony with nature that his reign represented. Rudolf greatly appreciated the work. It is the weirdest portrait of a ruler ever created.

Arcimboldo served at the Habsburg court for over 25 years. The first known “portraits” were presented to Emperor Maximilian on New Year’s Day of 1569. It is known to be a set of paintings called The Four Seasons, and the other The Four Elements.

Those allegorical portraits are containing countless visual references to the Habsburg family. The nose and ear of Fire are made of fire strikers, one of the imperial family’s symbols. Earth features a lion skin, a reference to the mythological Hercules, to whom the Habsburgs were at pains to trace their lineage. But one thing is also very important here—the naturalism of the paintings. There are no fantastic creatures or plants. Everything is real.

Water is composed of a myriad of aquatic creatures—the list contains 62 species! The unusual multitude of animals here is astonishing. On one hand, he includes such common invertebrates, as the snail and the crab, alongside worms. On the other hand, some common edible fish are missing.

In this composition, Arcimboldo gave no consideration to the relationship of sizes among the individual animals, as can be seen by comparing the large seahorse with the comparatively small seal.

I love the tortoise here! He has a bit of a bitchy resting face here, doesn’t he?

Like the other paintings in both series, Earth can be identified as an imperial allegory: suggesting that the Emperor rules over the elements and the seasons.

All the animals in the head were taken from life because the Emperor gave Arcimboldo permission to draw the creatures kept in his menageries. A lion and a tiger were allowed to roam Rudolf’s castle in Prague, documented by the account books which record compensation paid to survivors of attacks, or to the family members of victims.

In the allegory of fire we can see objects that are obviously related to that element. For example, the cheek is formed by a large firestone, the neck and chin are formed by a burning candle and an oil lamp, the nose and ear are contoured by firesteels. Prominently positioned in the picture is the collar of the Order of the Golden Fleece, beneath where the imperial double-eagle can be seen: a clear reference to the Habsburg House and the beneficiary of the series, Emperor Maximilian II.

This painting is identifiable with an element of Air by Arcimboldo–it is a copy after his original painting, or perhaps a workshop version from a later series of elements, or perhaps a repetition made for the Emperor.

Spring from 1573 features 80 identifiable floral references. It was all about the glory of the Habsburgs and nature.

The picture arrived in Spain possibly as a gift to King Philip II.

Of all the season-heads, Spring offers the least surprises. The form of the head is simply laid out with flowers, the breast with leaves. However, this portrait surpasses all of the other seasons in its richness of species. 80 different varieties of flowering plants can be counted.

In the profile bust of Summer, the cheek and neck area are composed of a summer fruit and vegetables; the mouth and lips are formed of cherries, and the open peapod imitates a row of teeth. The nose is a young wild cucumber and the chin is a pear; the eye shines as a glassy sour cherry between two small pears.

The ensemble is completed with a head covering, effectively a cap or a hat made of fruit and vegetables bedded in greenery, from which emerge oat spikes resembling a hat feather. The clothing in woven straw has a single artichoke and the woven signature and date sophisticatedly integrated into the composition as jewelry.

This is a true Autumn composition! We can see a pear-nose, an apple-cheek, a pomegranate-chin and a mushroom-ear. The head is covered with a laurel of red and white grapes with a gigantic white squash on top of the composition.

The profile bust of Winter is composed entirely of a gnarly tree-trunk. The nose is the cracked growth of a branch, moss forming the stubble of a beard and intricate branches forming the scrubby hair, in which an evergreen ivy grows. The mouth is composed of two fungi. The vacant, squinting eye is ingeniously created through a crack in the bark. From the breast protrudes a twig bearing two lemons. Again, the clothing is made of woven straw, in which one can make out a large M (for Maximilian II) and the firesteel referring to the Order of the Golden Fleece.

Arcimboldo made witty portraits of different professions using objects associated with each occupation. Among them are allegories of librarians, jurists, cooks, and vegetable gardeners. In these original and innovative compositions he densely assembled the objects together that seen from one side seemed to be a still life but turned upside-down came to life as a person…

The so-called “reversible heads” group allowed for a dual interpretation when turned upside-down, delighting the viewer with their metamorphosis. Here, a possible interpretation is that the figure represented in The Vegetable Gardener is Priapus, a fertility deity and protector of gardens.

The Librarian might actually be a portrait of a humanist and historian Wolfgang Lazius who served the Holy Roman Emperors of the House of Habsburg. In 1957, art historian Sven Alfons was the first to conclude that this was specifically a portrait of Lazius. The work has been interpreted as both a celebration and a satirical mocking of librarians and scholarship. K. C. Elhard suggests that it may be specifically a parody of “materialistic book collectors more interested in acquiring books than in reading them.”

Ha, we all know such people! 😀

The Jurist, also known as The Lawyer, portrays a member of the legal profession, whose facial features are depicted using meat and fish, and whose body is composed of legal documents. Two versions of the painting exist; the first, from 1566, is held by the National Museum of Fine Arts (Nationalmuseum) in Stockholm (acquired from a collection at Gripsholm Castle in 1866), and a later version is held by a private collector in Milan.

The features of the face are formed of plucked poultry and the grimacing mouth by fish. We cannot be sure if this painting is an allegorical composition or an actual portrait of a living person from that time. The German jurist Ulrich Zasius is presumed as the subject; the Nationalmuseum lists the picture in its catalogue as The Lawyer (Ulrich Zasius).

Arcimboldo as the Grandfather of Surrealism

Witty and intellectual portraits by Giuseppe Arcimboldo were admired by 20th-century artists such as Salvador Dali. Arcimboldo has occasionally been called the “Grandfather of Surrealism”—though whether it’s a compliment depends upon who you ask. One modern critic has theorized that Arcimboldo suffered from mental illness, but others insist he had to have had his wits about him to win and retain favor in such rarefied circles. Still, others have suggested that he was a misunderstood man of the people—rather than someone who fawned over the Habsburgs, he mocked them in plain sight. But maybe he was just into flowers, vegetables, and nature–and wanted to combine them with the beauty of a human being.

“The Vegetable Gardener by ARCIMBOLDO, Giuseppe” in Web Gallery of Art. Accessed Feb 28, 2022.

Agnolo di Cosimo (1503–1572), known as Bronzino, was an Italian Mannerist painter. He lived and worked in Florence and became the court painter of...