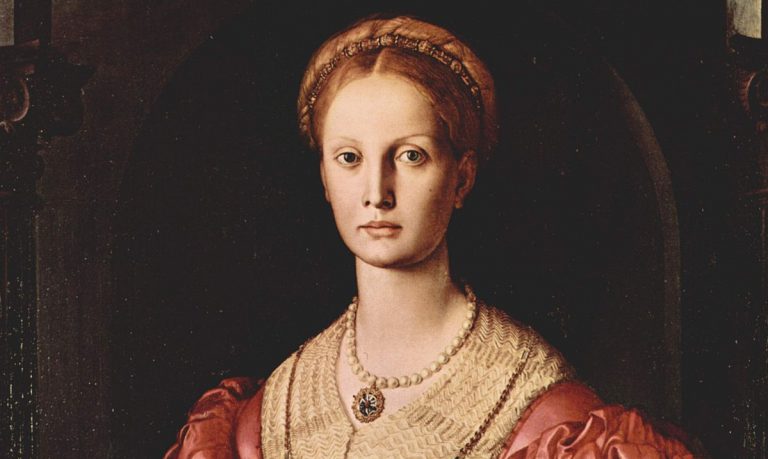 Masterpiece Story: An Allegory with Venus and Cupid by Agnolo Bronzino

Agnolo di Cosimo (1503–1572), known as Bronzino, was an Italian Mannerist painter. He lived and worked in Florence and became the court painter of Cosimo I de’ Medici. He trained with Pontormo, who influenced his style, however Bronzino’s paintings are much calmer and more distanced than his teacher’s emotional and dramatic works. At the Medici court, Bronzino focused mostly on portraits. Let’s meet four powerful women from these portraits.

Agnolo Bronzino painted multiple portraits of Eleonor of Toledo and all of them share an aloofness that is typical of his court paintings. Eleonor of Toledo was born in Spain, a daughter of the viceroy of Naples. As you can see in this portrait, she did not spare any expense when it came to her appearance. Her dress is probably one of the most luxurious in the history of painting (barring only the dresses of Madame de Pompadour). Eleonor had a very strong position in court. She was not only a wife and bearer of the heirs to Medici dynasty; her husband considered her a partner, and during his absences she was the regent of Florence. She was a patron of the arts, but she was also interested in agriculture, effectively managing her own and Medici’s lands.

In this portrait, Eleonor looks us directly in the eye with confidence tinged with contempt or boredom. She doesn’t have to prove anything; she is rich, beautiful, powerful, and what’s more – bore a son. Her hand shields and presents the boy at the same time. The color of the background is a perfect choice as it enhances her complexion and the texture of her dress.

For a long time, this portrait was attributed to Bronzino’s teacher – Pontormo. One theory suggests that the lady was Francesca Salviati- after the death of her husband Piero Gualterotti in 1533, she remarried Ottaviano de’ Medici, a scion of a secondary branch of the family. In 1535, the couple had a son, Alessandro, the future Pope Leo XI. The predominant colors of the lady’s sumptuous gown echoing the red and white of the Salviati family arms, and the similarity of her ring to Medici family emblem, are evidence that point to her being Salviati.

Just as in Eleonor’s portrait, the dress is extremely rich, but here the focus lies on the fabric, not on the gold and silver. Sumptuous is the word that comes to my mind when I look at those sleeves with the contrast of red and black and the various textures of the materials. The jewelry and the rosary are painted with extreme attention to detail.

Bronzino sticks to an aloof and cool way of depicting his subjects. The lady looks us in the eye, but this time there is a hint of a smile on her face. The dog on her lap is a spaniel, a breed that was very popular at the time in Italy; you can also find it in some of Titian’s paintings.

You can find out more about this painting on the Städel Museum website.

Laura Battiferri was a renowned Renaissance poet, wife of the architect and sculptor Bartolomeo Ammannati, and a friend of Eleonor of Toledo. She surely met Bronzino at court, as the artist himself was also writing poetry. This portrait may be seen as a portrait of a fellow poet- he posed her with a hand pointing at the book, directing our attention to what was the most important to her. She does not meet our eye, for she is focused on what is beyond our sight, both literally and metaphorically.

Given the austere color palette and the pose of the sitter, one may be inclined to consider her dress as relatively simple, especially compared to the previous two portraits. This would be a mistake–take a second look. It is a lush mixture of dark, almost black navy with the deepest wine red fabrics, and the collar is beautifully finished. Also, note her jewelry; it is not as abundant as in Eleonor’s portrait, but it is shown in great detail.

Lucrezia Panciatichi, born Pucci, was the wife of the Florentine academician Bartolomeo Panciatichi. Her hand rests on a book of daily offices, turned to prayers to the Virgin Mary, and the words on her outer gold necklace say Amour Dure Sans Fin (love lasts eternally). She looks us straight in the eye, but her face shows no emotion. As she sits in waxy perfection, her long fingers touch the book of prayers sensuously.

Sensuality triumphs over religiosity as Bronzino renders every glimmer of light on her ruffed-up sleeves, every nuance of color in her dress. By contrast with the dark background, her neck and face look porcelain-like, offset by the deep shadows.

When you look at these four portraits again you will notice all the similarities. If anything, Bronzino was consistent in his way of presenting his sitters. However, you will also find strong women with an agenda. The powerful women of Bronzino are not only beautiful but also have strong personalities that shine through even in such a formal style of portraiture.

A 30-minute drive from central Florence lies a true Tuscan secret: a 16th-century sculpture Colosso Appenninico by Giambologna. Discover with us this...