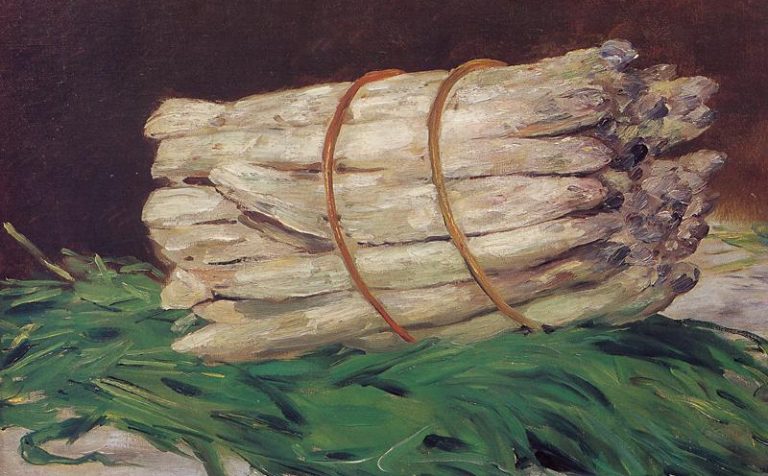 The season for asparagus is very short as it starts around the 23rd of April (St George’s Day) and lasts only until June. Its special qualities and delicate flavor have rendered it a hero of vegetables, loved by everyone from kings to artists. See asparagus in art and hurry up to get the last ones!

The Romans came up with food freezing in the 1st century BCE to preserve their favorite asparagus longer and they devoted whole treaties to the ways it should be farmed (Cato the Elder and his On Agriculture).

In the Middle Ages asparagus was used as a sedative but with time it gained a more (in)famous association as it was believed to stimulate love and passion. A 17th century herbalist, Nicholas Culpeper wrote that asparagus “stirs up lust in man and woman”.

Is it due to its phallic shape that the French word asperge means also “penis”? Is that why Manet liked to paint asparagus so much…?

In the Netherlands asparagus was certainly associated with luxury, prosperity and abundance…

… and together with strawberries and artichokes it symbolized the fruits of Paradise.

Asparagus can be enjoyed in company…

…but they’re also good just on its own.

Not only vegetarians and artists love asparagus in art, since it was the Germans who in 1985 founded a museum dedicated to asparagus.