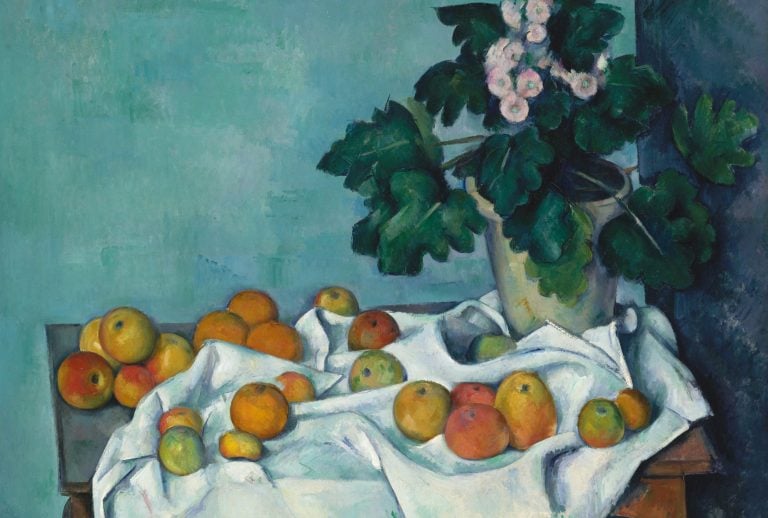 Paul Cézanne was widely misunderstood by his contemporaries. This shy man, who was a precursor of Cubism and Fauvism, loved to paint fruit (in art history called “still lifes”). This is all we know about Cézanne’s fruits:

1. Still lifes were his favorite genre

Most of Paul Cézanne’s paintings are still lifes. They were made in a studio using very simple stuff like a cloth, a vase, a bowl, or even a skull.

These Apples are among his early works. They look quite real but this will change later…

His works are both traditional and modern. Cézanne’s fruit became abstract with time. Later they were just splotch of color enclosed by a line. Like here, they don’t have any purpose except being decorative objects.

Cézanne was interested in the simplification of naturally occurring forms to their geometric essentials: he wanted to “treat nature by the cylinder, the sphere, the cone.” An apple or orange would be a sphere obviously.

5. He created an illusion of depth

Though a precursor of Cubism, Cézanne often created an illusion of depth – like in this painting, with the curtain at the back and the white sheets in the front.

Here we can see the beginning of a new system of representation, one that Cézanne would subsequently develop, and that would open the way to Cubism. While the fruit on the table is shown frontally, the perspective of the table is much more raked: in the same composition, the objects are painted from several different viewpoints.