The Gift of Pomona – Pears in Art 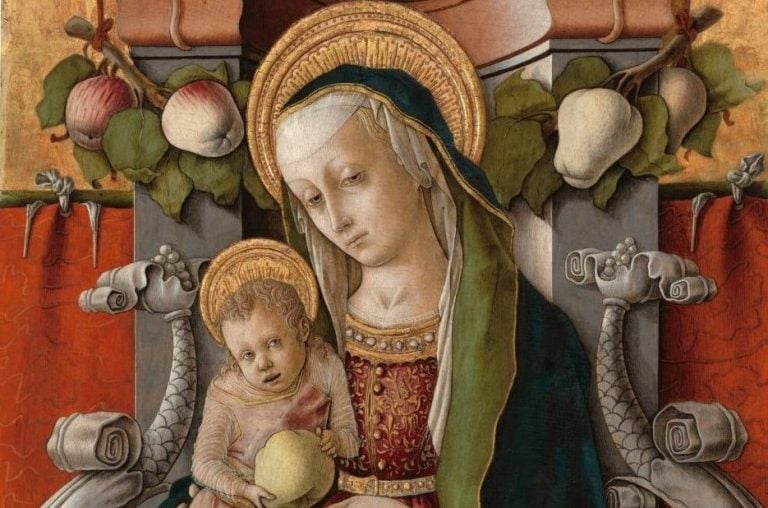 The Scent of Orange in the Wintery Air: Portraits with Oranges

The pear has been with us since prehistoric times – dried slices have even been unearthed in Swiss cave dwellings from the Ice Age. In so many cultures across the world we find references to the pear, signifying abundance and sustenance. So, let’s take a look at the humble pear in art.

The Chinese believe the pear symbolizes immortality and it is a popular gift to leave at family shrines. It has been chronicled in Chinese writings and art for over a thousand years.

Pears are found in Homer’s 9th century BCE epic poem, The Odyssey. It is one of the “gifts of the gods” which grew in the garden of the King of the Phaeacians. Depictions of fruit in art can be dated back 3000 years to Ancient Egypt, where still life paintings of foodstuffs were thought to become tangible in the afterlife, ready for the deceased to feast upon. These include the pear, sacred to Isis.

In Ancient Rome, decorative mosaics containing food signified the hospitality of the host and celebrated the seasons. Furthermore, in both Greek and Roman mythology, pears are sacred to Pomona, the goddess of fruitful abundance. Paintings of pears were found in the ruins of Pompeii.

The pear is found in Renaissance religious paintings, representing Christ’s love and the mother Mary. Perhaps the most famous is Giovanni Bellini’s 15th century painting, shown above, often referred to as Madonna of the Pear. Carlo Crivelli produced the monumental piece below slightly earlier in 1470, showing mother and child cradling a sumptuous fruit that is literally as big as the child Christ’s head.

Giuseppe Arcimboldo‘s portraits were made up entirely of fruit and vegetables. See his famous portrait of Holy Roman Emperor Rudolf II, reimagined as Vertumnus, Roman god of metamorphoses in nature. See that luscious blush pear right in the middle of that fantastical face.

Pears are a common feature of Flemish flower and fruit paintings from the 15th to the 17th century. In the 19th century the Impressionists also found favor with the humble pear. Vincent van Gogh painted both the flowering tree as well as the fruit. Paul Cézanne included the pear in his many still lifes. Even Picasso got in on the trend.

Cubist Georges Braque saw his pears in a very distinctive way, as did Juan Gris.

Of course the shape of the pear may represent the female form – fruitfulness and femininity combined. Georgia O’Keefe‘s sensual pears emphasize the graceful form that might be person or fruit.

Samuel Bak uses the pear repeatedly in his work. Stone pears crumble into ruins, pears hang in harnesses, we see a pear on an Altar, a desolate pear next to a pair of empty boots. For this Holocaust survivor, the pear symbolizes something other than health and abundance.

Can pears be controversial? Absolutely! A painting by British artist Sir William Nicholson was investigated by the BBC program Fake or Fortune. Experts disagreed on the provenance of this still life of a jug and pears, purchased for £165,000. The authenticity of those pears is still in dispute today.

The pear is a wonderful and hardy fruit, widely grown in the temperate regions of the world, with varied size, shape, texture, and flavor. In Spain in particular, they seem to have an intense love for them. There is an expression, esto es la pera, literally translated as ‘this is the pear’, meaning a particularly enjoyable experience. The English idiom “fit as a fiddle” translates to estar mas sano que una pera, indicating that someone is “healthier than a pear”.

Enjoy these images and maybe even pick up a pear and enjoy the sensual experience of holding that voluptuous heart-shaped weight, breathe in the sweet scent, and feel the sugary grittiness melting on your tongue. Esto es la pera!