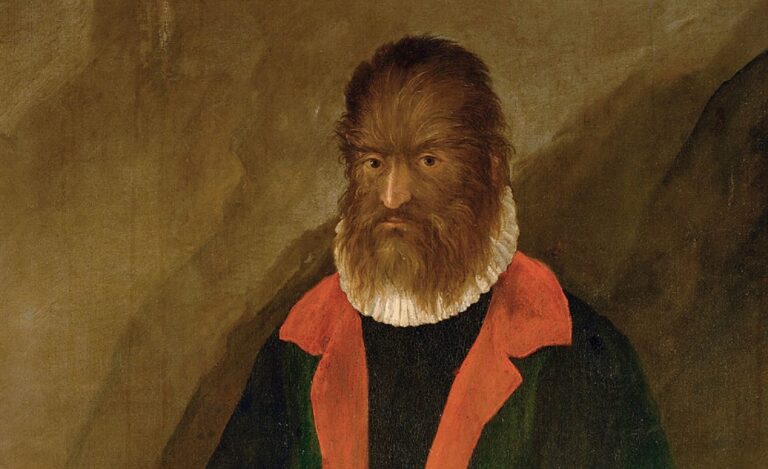 The Kunsthistorisches Museum in Vienna, one of the foremost museums in the world, owns rich holdings comprising artworks from seven millennia – from Ancient Egypt to the late 18th century. We decided to share some masterpieces from this museum with you. Check out 5 weird portraits from the Kunsthistorisches Museum collection that will make you wonder about human physiognomy. Enjoy!

Petrus Gonsalvus, “the man of the woods,” was born in 1537 in Tenerife. His life has been well chronicled as he became famous during his lifetime because of his condition called hypertrichosis, an abnormal amount of hair growth over the body. Gonsalvus was a noble man, although he was never considered fully human in the eyes of his contemporaries. He married, had children (of which four out of seven were also afflicted with hypertrichosis), and painted. It is believed that the marriage between Petrus Gonsalvus and lady Catherine inspired the fairy tale Beauty and the Beast.

2. The Man with a Feathery Shade on His Head

The prince Gundakar took part in the equestrian ballet, one of the elaborate festivities held at the Viennese court to mark the marriage of Emperor Leopold I and the Spanish infanta Margarita Teresa (that famous one from Velázquez portraits) in Vienna in 1667. I really wonder how on earth this poor horse endured all these decorative elements – they seem to be heavy!

3. The Giant and the Dwarf

Legend has it that the men in this portrait are Archduke Ferdinand’s court giant, Bartlmä Bon, and court dwarf, Thomele. The Habsburg court was famous of its love of curiosities and interest in weird discoveries. Both sitters often played their part in court festivities and pageants. But why the dwarf looks like a child, I have no idea.

4. The Duke with a Long Nose

Duke John the Fearless was the ruler of a territory that, at the time, was regarded as the most powerful of Western Europe. He was murdered in 1419 on the bridge at Montereau during a parley with the French dauphin (the future Charles VII of France), by Tanneguy du Chastel and Jean Louvet, the dauphin’s close counsellors. Sounds a bit like Games of Thrones doesn’t it? Still, we published this portrait here because of Duke’s famous long nose.

Frederick III, called the Peaceful, was Holy Roman Emperor from 1452 until his death, and the first emperor of the House of Habsburg. During his reign, Frederick concentrated on re-uniting the Habsburg “hereditary lands” of Austria and took a lesser interest in Imperial affairs. Nevertheless, by his dynastic entitlement to Hungary as well as by the Burgundian inheritance, he laid the foundations for the later Habsburg Empire. Mocked as “Arch-Sleepyhead of the Holy Roman Empire” during his lifetime, he is today increasingly seen as an efficient ruler.

We hope you enjoyed these 5 weird portraits from Kunsthistorisches Museum collection, to see the museum’s official website click here.

It’s DailyArt App’s birthday! Well, it is hard to believe but nine years ago, in 2012, everything started for us with launching...

As Christmas approaches, many of us are probably decorating our homes for the holidays. Even though this year again we might not be able to gather...