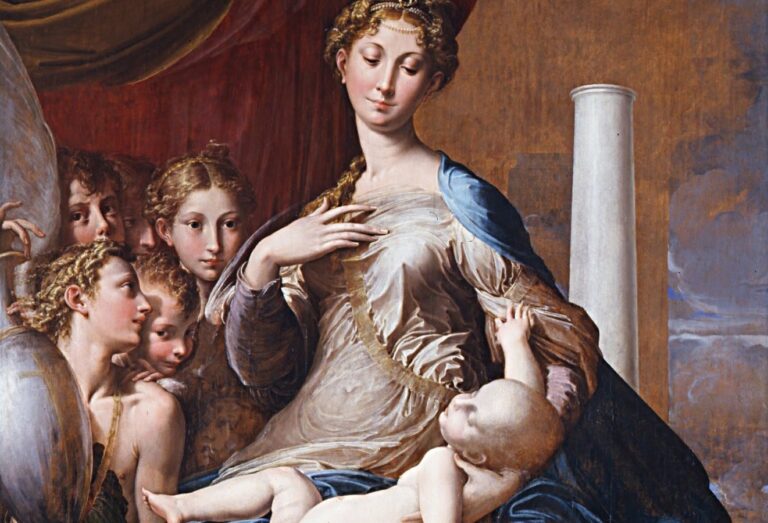 Young artists who left workshops in the years following the activity of Michelangelo and Raphael must have had a very hard time: how could one create art as perfect as theirs, how could one outdo their achievements? Artists needed to find their own way to make art again. And they did… Mannerism!

The way was simple: let’s make everything even more idealized than Michelangelo and Raphael did. Not possible? Nonsense, everything is possible. Elegance, beauty and sophistication are a must, and if that requires a little bit of exaggeration…? No problem, an additional cervical vertebrae never killed anyone yet. (Although, to me, giant Madonna of the Long Neck and Extremely Long Fingers doesn’t seem the happiest woman on earth. Not even mentioning her overgrown baby.)

The term used for this new way is Mannerism. It comes from Italian words:

and it’s applicable to European (mostly Italian) art produced roughly between 1520 and 1600. Mannerism expanded beyond visual art and affected literature and music. I just try to imagine these florid verses flowing out of Manneristic volumes of poetry accompanied by elaborate tunes of a viola…

Andrea del Sarto was a master to two most prominent Mannerist painters in Florence: Jacopo da Pontormo and Rosso Fiorentino. His High Renaissance ideals of beauty, so similar to Raphael’s and Michelangelo’s, left obvious marks on his pupils’ styles. They tried to improve his technique by elongating bodies and arranging them in precariously balanced poses in a collapsed perspective and irrational settings, adding theatrical lighting to heighten the dramatic effect.

Similar trends were developing simultaneously in Rome. Parmigianino, a student of Correggio, and Giulio Romano, who was Raphael’s head assistant, followed the same aesthetic.

Mannerism spread across Europe and its examples are visible in the styles of El Greco in Spain or Joachim Wtewael in the Netherlands. However, most followers can be found in Italy, including Alessandro Allori, Tintoretto, Benvenuto Cellini and Giuseppe Arcimboldo. The style hangs about until the Baroque began to sweep over Europe.

Agnolo Cosimo, known under the name Bronzino (which most probably refers to his dark skin tone) was a student of Jacopo Pontormo. He lived all his life in Florence, and from his late 30s worked as the court painter of Cosimo I de’ Medici, Grand Duke of Tuscany. He is mainly known as a portraitist.

Although the identity of the halberdier portrayed is debated, it is most likely the portrait of a Florentine Francesco di Giovanni di Gherardo Guardi. Based on a seventeenth-century inventory of the estate of Riccardo Riccardi, formerly it was thought to be the portrait of the young Duke Cosimo I.