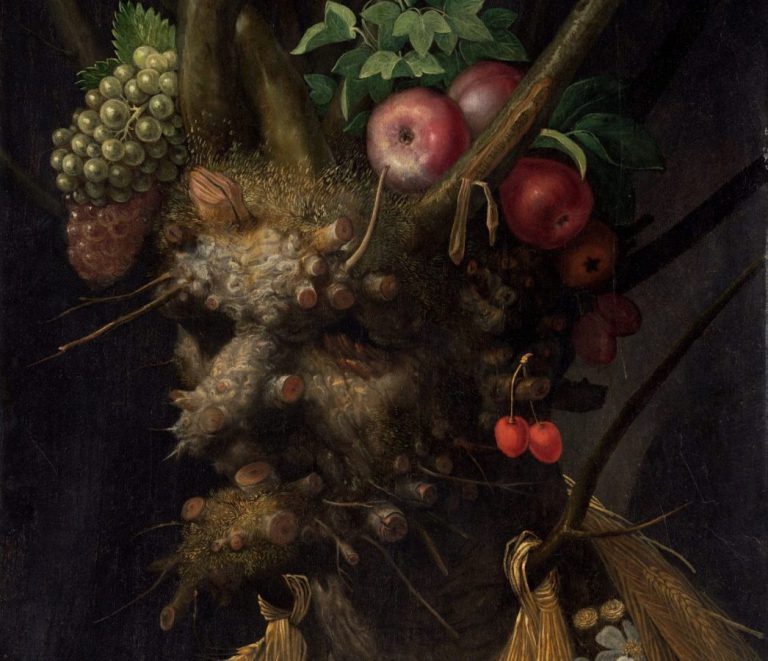 Autumnal Still Lifes for a Tasty Welcome of Autumn

Giuseppe Arcimboldo’s paintings of the four seasons have astonished audiences from the 16th century to this day. Even though, allegorical representations are quite common in the history of art, Arcimboldo’s portraits manage to capture the spirit of each season in a bizarre and unique way.

In the 16th century the world had not yet revealed all of its secrets. Explorers roamed the seas to discover new lands and scientists meticulously examined the natural world. Emperor Maximilian II, Arcimboldo’s patron, was an avid enthusiast of the new sciences of botany and zoology. During his reign, he made Vienna a center of scientific study.

Arcimboldo revealed his skill in illustrating the new and rare specimens that came from all over the world. Taking his studies one step further, he combined them to create fantastic faces.

Arcimboldo painted the first series of the Four Seasons in 1563. Unfortunately, only Winter, Summer and Spring survive from the original series. Each face displays and is composed of plants and vegetables that are characteristic of each season.

Winter is cold and moody. A large tree trunk stands for the head while the nose and ears appear like twisted branches. The hair is formed by smaller twigs and ivy and his beard is made of moss. Two fungi form the mouth, giving Winter a sullen expression. From his chest extends a branch with two lemons. Winter wears a cape of woven straw decorated with a large M. The letter refers to his patron Emperor Maximilian II, and a firesteel, the symbol of the order of the Golden Fleece.

Flowers sprout from every nook and cranny in Spring. The most ambitious portrait in all the series, Spring features 80 different species of flowers. Blossoms fill the head and the bust is made of leaves. We can distinguish a lily that works as a hat feather and an iris as a chest medallion. In contrast to Winter’s broody expression, Spring smiles conveying the sunshine and mild weather of the season.  Even through the painting is part of the original series, King Philip II of Spain received it as gift.

Summer comes bearing fruits. The most relaxing time of the year beams at us. Peaches, cherries, cucumbers, and pears form this mischievous face among other fruits and vegetables. Arcimboldo added new and exotic varieties. For example, the corn that works as an ear, was imported at the time from America and the white eggplant that forms the neck, which came from Africa and Arabia. The figure wears a hat composed of interlocking greenery, oats, and summer fruits. Woven inside Summer’s cloak we see the artist’s signature, on the neck, and the date of the painting on the shoulder.

The original version of Autumn is lost. Luckily, the Louvre holds a copy made by the artist. Emperor Maximilian was so impressed with Arcimboldo’s allegories that he asked him to make copies of the paintings and send them as gifts to monarchs around Europe.

Autumn captures the fruitful season of the harvest. The figure’s body is a broken, wooden barrel. Ripe seasonal plants like pears, apples and pomegranates compose the face. Autumn’s hair is made of grapes and vine leaves and his hat is a pumpkin. On his mushroom ear he wears a fig shaped earring.

Four Seasons in One Head

Almost 30 years after the original series of the Seasons, Four Seasons in one Head sums up Arcimboldo’s fascination with composite heads. The figure stands in three quarters view instead of the usual profile and combines elements from all the previous paintings. A twisted tree trunk, full of little stumps that represents the head remind us of Winter.  Flowers and wheat decorate the chest, characteristics of Spring and Summer, respectively. Autumn decorates the head with apples, grapes and ivy.

Agnolo di Cosimo (1503-1572), known as Bronzino, was an Italian Mannerist painter. He lived and worked in Florence and became the court painter of...

Queen Elizabeth I (1533-1603) was the only surviving child of King Henry VIII of England and his second wife Anne Boleyn. Being a girl was hard...