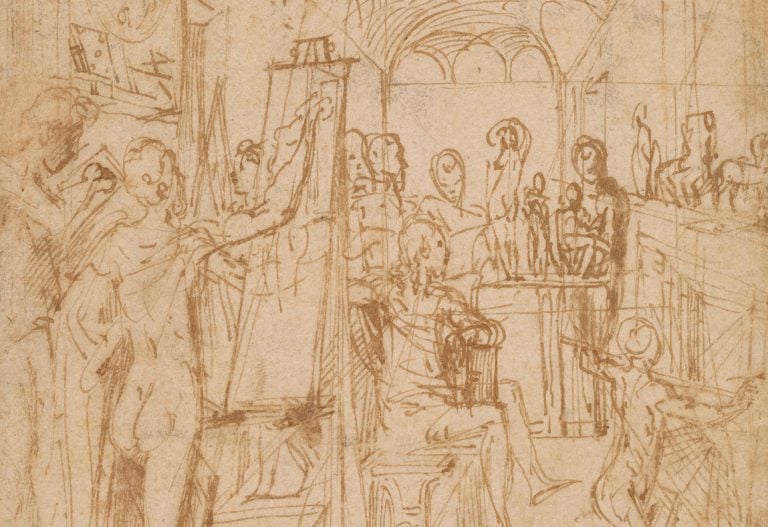 Francesco Mazzola, known as Parmigianino, produced many drawings that captured normal scenes of everyday life during the Renaissance. These drawings reveal a new perspective on 16th century Italian life.

Parmigianino was an Italian Mannerist artist. He was born in Parma in 1503 but moved to Rome in 1524 to pursue an artistic career. He is mostly remembered today for his paintings but was also a prolific draughtsman who created a multitude of prints and drawings.

A whopping 1012 of his drawings exist today. During the 16th century, artists usually created drawings as a preparation stage for larger artwork. For example to practice composition or experiment with a certain figure. The following drawings are extremely rare for this period and unique in the history of art. Parmigianino captured everyday life as it happened around him.

One example of these unusual drawings pictures an artist’s apprentice at work. The young male figure is grinding paint pigments and is unaware of the artist drawing him. What is particularly noticeable in this drawing is the level of detail created through the use of cross-hatching. Although the artist seems to have drawn the boy from observation, the detailing would have taken much more time.

Parmigianino’s Drawings of Life at Home

Other examples of everyday drawings by Parmigianino reveal life as it happened at home. A drawing of A Woman Plaiting Another Woman shows a mundane task. It also displays relationships and a loving image of sisterhood.

It becomes evident that Parmigianino saw beauty in even the most boring scenes within the home. With a desire to put down anything he could see on paper, Bust of a Woman in Profile and Studies of Washing Hanging Out to Dry shows a scene we can all recognize from daily life.

The unusual subjects of Parmigianino’s drawings continue. In A Pair of Lovers, Seated, Parmigianino draws himself as the figure on the right. While he drew multiple self-portraits throughout his career, including himself in a scene like this was definitely unprecedented at the time.

Parmigianino also drew life as it happened on a farm. He captured the different activities involved in the agricultural scene. We can see numerous figures busy with different tasks, including a woman milking a cow. We are provided with a glimpse into what life was really like in 16th century Italy.

The Significance of Parmigianino’s Everyday Drawings

The drawings reveal aspects of 16th century life that are rarely captured in artworks from this period. Not only were real-life subjects uncommon, but Parmigianino was also one of the only artists of his time to capture everyday life so frequently. He opened up new possibilities for the purpose of a drawing, as a documentation of daily life.

Before him, drawing was solely a means to help artists create a larger artwork. Although artists like Raphael and Polidoro da Caravaggio had touched on the genre of everyday drawings before, Parmigianino took the subject to the next level and developed it greatly. The artist approached drawing with an intense determination to capture anything and everything.

Agnolo di Cosimo (1503–1572), known as Bronzino, was an Italian Mannerist painter. He lived and worked in Florence and became the court painter of...

A 30-minute drive from central Florence lies a true Tuscan secret: a 16th-century sculpture Colosso Appenninico by Giambologna. Discover with us this...