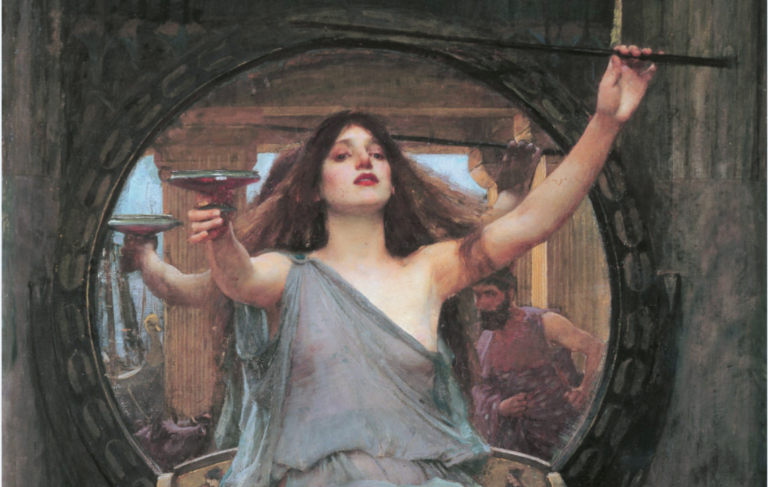 The Victorian feminists in 19th century England paved the way for the women’s movement across the world. The “New Woman,” as she was called, demanded social equality, economic independence and the right for education.

However, many people (both men and women) had different opinions and attacked Victorian feminists at every possible turn. Male artists used their paintings as a subversive way to undermine feminine power. They made art another ingredient in the social discourse around this subject. To do this, they chose the genre of history paintings, a painting with a mythological or biblical subject, as their preferred weapon.

In mythology, powerful women were usually sorceresses and held in their hands the destinies of others. These “others” were often men.

The New Woman’s desire for equal education led to a renewed interest in the depiction of sorceresses. In the eyes of the patriarchy, a woman with knowledge could be autonomous and therefore have power. We still say knowledge is power, right?

John William Waterhouse (1849-1917) was fascinated by the idea of the dangerous woman. Therefore, most of his paintings depict subjects based in mythology and literary sources. They recreate distant and mysterious past worlds. In these worlds, dangerous women are easy to find.

In The Magic Circle, housed at Tate Britain, a scene filled with enchantment develops. A lone woman stands in front of a steaming cauldron and draws a protective circle around her with a stick (or a magic staff). Around her neck lies a snake in the form of the Ouroboros, a snake that eats its tail. This was a symbol of the circle of life and death in Ancient Egypt. She also wears a dress decorated with occult designs that identify her as a sorceress. This is strengthened by her connection to nature and the power she draws from it. Note the herbs in her dress, as well as the crows, symbols of ill luck and death, around her.

Several other elements pinpoint her potentially dangerous status. Firstly, the sickle she holds in her hand. The simplest explanation would be that the woman is depicted holding a potential weapon, but what is important is its purpose. Logic says that it is used to cut herbs. However, there is a more sinister possibility. In ancient Greek mythology, Zeus used a sickle to castrate his father Kronos and to become the king of the gods. Is Waterhouse suggesting that the result of women having power will be a symbolic castration?

Together, these elements are a commentary on the contemporary affairs of the Victorian era regarding the status of women. A fantasy world masks the artist’s opinions about female autonomy.

British suffrage began in the late 1860s. This painting dates from 1886 and by that time the issue was at its zenith.

Circe Offering the Cup to Ulysses by John William Waterhouse

Similarly in this painting, housed in Oldham Gallery, the imagery is straightforward. Circe sits on her throne, holding her wand in one hand and offering up a cup with the other. She is obviously powerful and poised to cast a spell. Her hair fans out around her as though it is electrically charged. Meanwhile, her gaze seems vacant. Scattered around her feet are her flowers and herbs and by her throne lies a peaceful swine. According to the story, Circe used a magic potion to transform Ulysses’s crew to pigs. However, Ulysses had already taken an antidote and so Circe’s plan failed. This painting, however, depicts her at the peak of her power.

Circe’s extraordinary beauty is striking. This is one of the main characteristics of the sorceress and associates her with the archetype of the femme fatal. She is beautiful and dangerous at the same time. It is a romanticized and idealized version of transgressive femininity. By being admired for her beauty but detested for her wicked mind and bestial sexuality, she is the opposite of a respectable, dependent and submissive Victorian woman.

The Beguiling of Merlin by Edward Burne-Jones

Another artist enchanted by the image of the sorceress is Edward Burne-Jones (1833-1898). One of the most well-known examples is his depiction of The Beguiling of Merlin, an episode from the Arthurian legend. According to the story, Nimuë (or Vivien) seduced the wizard Merlin in order to gain access to his magic. With this, she managed to trap him in the hollow of an oak tree. In this image, while she is reading the spell, Merlin lies helplessly as the tree branches confine him.

A significant element is the posture of the two figures, which theatrically demonstrates Nimuë’s superiority over Merlin. Her figure dominates the canvas as she triumphs over masculine authority by partially obscuring Merlin.

Nimuë exploited her femininity to steal his knowledge, which is shown by the book she holds in her hands. She then used this knowledge to defeat him. She is also signified as a sorceress by the snakes that run through her hair, resembling the ancient Greek Medusa, who petrified people with her gaze.

The idea of women with knowledge and the disastrous results are visible throughout this painting. Therefore, arguably, the image sums up the patriarchal Victorian arguments against the education of women through the disguise of allegorical mythology. She is not a supernatural creature but a mortal woman acquiring supernatural powers. She immediately uses this knowledge to do harm. In this way, she becomes more relatable to contemporary protesters and the social anxieties around female education.

The image of the sorceress fascinated artists with her beauty and supernatural powers. In short, she embodied the New Woman. She was a learned woman and her image expressed the anxieties of men. In art, it was a product of its time. The image of the sorceress united occultism, mythology and literature with the contemporary demands of the women’s movement about education and, ultimately, the vote.

Bashamm, Diana, The Trial of Women: Feminism and the Occult Sciences in Victorian Literature and Society ( London: Macmillan,1992).

Portraits of Black people are rare in European art history. Let’s be clear: they were there, in society, but they rarely made it into art, except...