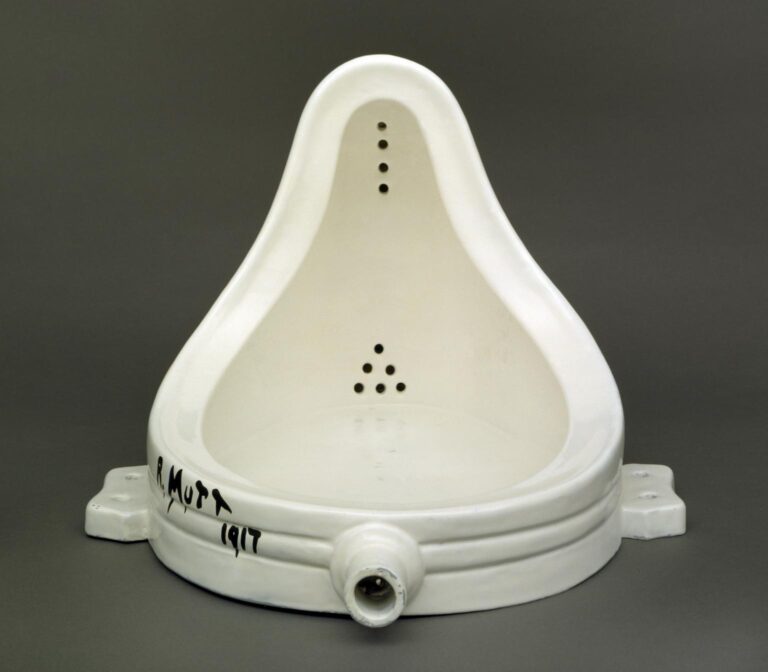 Henri-Robert-Marcel Duchamp was a French, naturalized American painter, sculptor, chess player, and writer whose work is associated with Cubism, conceptual art, and Dada. Duchamp was famous for weird, often sarcastic, or funny pieces of art. Can a bottle rack, or a bicycle wheel, be an artwork? In his concept of readymades, yes. They were found objects which Duchamp chose and presented as art. In 1913, Duchamp installed Bicycle Wheel in his studio. However, the idea of readymades did not fully develop until 1915. The idea was to question the very notion of art, and the adoration of art, which Duchamp found “unnecessary.”

In 1919, Duchamp made a parody of the Mona Lisa by adorning a cheap reproduction of the painting with a mustache and goatee. To this, he added the inscription L.H.O.O.Q., a phonetic game which, when quickly read out loud in French, sounds like “Elle a chaud au cul”. This can be translated as, “She has a hot ass”, implying that the woman in the painting is in a state of sexual excitement and availability. It may also have been intended as a Freudian joke, referring to Leonardo da Vinci’s alleged homosexuality. Duchamp gave a “loose” translation of L.H.O.O.Q. as “there is fire down below” in a late interview with Arturo Schwarz.

Fountain is a porcelain urinal, which was signed “R. Mutt” and titled Fountain. Submitted for the exhibition of the Society of Independent Artists, in 1917, the first annual exhibition by the Society to be staged at The Grand Central Palace in New York, Fountain was rejected by the committee, even though the rules stated that all works would be accepted from artists who paid the fee. Fountain was displayed and photographed at Alfred Stieglitz’s studio, and the photo was published in The Blind Man, but the original has been lost. This work is highly regarded among art historians and theorists of the avant-garde. 17 replicas commissioned by Duchamp in the 1960s now exist.

Bicycle Wheel consists of a bicycle fork with its front wheel mounted upside-down on a wooden stool. In 1913, at his Paris studio, Duchamp mounted the bicycle wheel upside-down onto a stool, spinning it occasionally just to watch it. Later, he denied that its creation was purposeful, although it has come to be known as the first of his readymades. “I enjoyed looking at it,” he said. “Just as I enjoy looking at the flames dancing in the fireplace.”

Marcel Duchamp claimed to have bought the bottle rack featured in Bottle Rack at a department store called Bazar de l’Hôtel de Ville near the Paris city hall. Bottle Rack was a typical, metal rack used for the drying of bottles, but the spiky, aggressive appearance of the piece earned it the name of Hedgehog. Unlike the earlier Bicycle Wheel (1913) or Pharmacy (1913), Bottle Rack was not modified in any way, making it the first “true” example of a readymade. Bottle Rack also had an inscription scribbled on its side, much like the infamous R. Mutt of Duchamp’s Fountain (1917) piece, but the actual words remain a mystery as Duchamp had forgotten the inscription by the time it was thrown out.