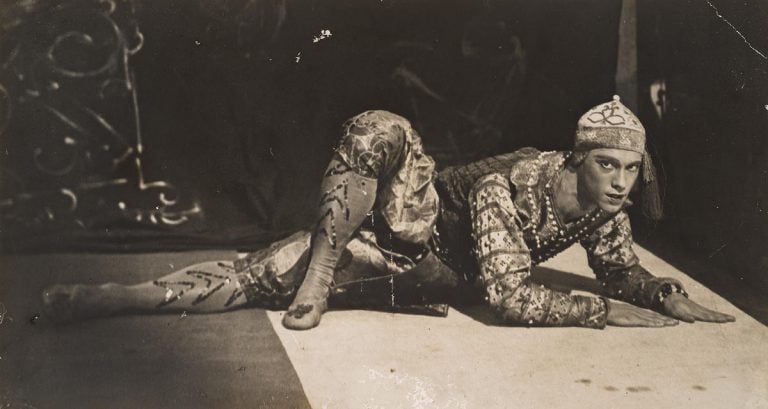 Ballets Russes was a ballet company founded by the Russian impresario Sergei Diaghilev. No doubt, Ballets Russes made Russian ballet famous all around the world. However, there was special love Russians received from fastidious Paris. Let’s find out how Ballets Russes conquered the Parisian audience!

What is Ballet Russes?

The idea of promoting Russian art came to Sergei Diaghilev in the 1900s. As his efforts to become a painter or a musician were in vain, Diaghilev instead found his destiny in the organization of art exhibitions, concerts, and theatre performances.

Although Sergei Diaghilev did not have enough money to organize art events, his rare skill of making friends with powerful and wealthy people, along with his skill of attracting talented artists and ballet dancers, helped him to bring the spectacular world of Russian art to Paris.

Then I was thinking of the short ballets where … three factors of ballet – music, painting, and choreography – were converged tighter than it had seemed before.

Indeed, Diaghilev took to his artistic team the most talented artists, such as Alexandre Benois and Leon Bakst. The brilliant choreographer, Michel Fokine, directed such beautiful ballets as Le Pavillon a’Armide, Les Sylphides, Cleopatre, Carnaval, Scheherazade, Giselle, Les Orientales, Le Spectre de la rose, and many many others. The leading ballet dancers were Anna Pavlova, Vaslav Nijinsky, Tamara Karsavina, Ida Rubinstein, and Serge Lifar. Their names are the landmarks of the Russian ballet up to today.

Basically, Sergei Diaghilev did not like stagnation in the art process. That’s why the team of Ballets Russes changed often. Therefore, we have listed the most bright successors of the company.

In the spring of 1909, Ballets Russes performed at Théâtre du Châtelet, Paris. The ballet Le Pavillon a’Armide succeeded due to the inspiration behind it: the well known Théophile Gautier novel Omphale, mixed with the legend of Rinaldo and Armida. The most iconic image of Rinaldo and Armida was made by famous French painter Francois Boucher. Moreover, the scenario begins in the 18th century, when France spread its cultural trends throughout Europe.

However, one year later, in 1910, Ballets Russes overwhelmed Paris with the oriental styled ballets Schéhérazade, L’Oiseau de feu, and Les Orientales. Schéhérazade made an aesthetical revolution in French fashion: the day after the premiere, Parisian fashionistas clothed themselves in bright and luxurious oriental dresses.

Thus, love for oriental art was brought to Paris from Russia through ballet, music, and paintings.

There were Russians on the stage, but they played Asian tunes, and the pyramids of the Egyptian pharaohs and the harems of the Persian sultans towered before the audience. There was a connection between the West and the East.

It was completely different from what Ballets Russes had shown before! From that time forward, Russian ballet was associated with the unpredictable, the spectacular, and the classy.

The French Admirers of Ballets Russes

Our French friends repeated: you arrived at the most appropriate moment, you refresh, you push us on to new themes and sensations. And I was convinced that with the Ballets Russes of 1909 something like a new era could begin in French and Western theater art. And such an era began to take shape.

Indeed, Ballets Russes inspired the French illustrator, George Barbier, to paint marvelous pictures of ballets. The French poet and critic, Jean Cocteau, joined Diaghilev’s circle of friends and made posters for ballet Le Spectre de la rose. One of them, with Anna Pavlova in the drawing, was iconic for Ballets Russes.

Guess who else was thrilled to collaborate with Diaghilev? The great Coco Chanel! For sure, Russians took a special place in Chanel’s heart. Her intimate friend, Misia Sert, hosted an artistic salon in Paris. Namely, there Coco Chanel and Sergei Diaghilev crossed paths. Chanel fell in love with Ballets Russes and collaborate with “Diag” (that’s how she called Sergei) as a costume designer for ballet Le Train Bleu.

The plot is based on the life of the jeunesse doree of that time. This includes Cote d’Azur, elite society, then fashionable tennis, swimming, and parties. Paris hosted the Olympic Games that year and the sporting theme was on top of fashion.

Chanel replaced tight tutus and ballet costumes with tops and shorts, which resembled trendy bathing suits of that time. Classic tracksuits, striped sweaters, knee-highs, tennis tunics, and skirts were also in the performance. But for the ballet theater, the use of household costumes was a breakthrough.

By the way, Chanel was the creator of the classic ballet hairstyle: the dancers’ hair is combed smoothly and gathered in a bun at the back of the head. According to Coco Chanel, this hairstyle does not interfere with dancing and makes the ballerina look more elegant.

Mix of France and Russia at Ladurée a la Russe

The widely famous brand Ladurée, which has existed since 1862 and created the hallmark of French cuisine, made an unprecedented step.

The concept of the menu was created in Russia. It reflects the idea of friendship between Russia and France in many fields – from art and literature to language and cooking. The result is a Russian restaurant with an obvious French stylization. The key point for Ladurée à-la Russe was Sergei Diaghilev’s theater enterprise Ballets Russes along with Leon Bakst’s sketches in particular.

A century later, the elaborated artworks of the artist inspired the creation of a bright and stylish interior, which attracts visitors with impeccable taste.

Thus, Ballets Russes conquered the exquisite Parisian audience with the nostalgic French-styled ballet Le Pavillon a’Armide for the first time. The second time, Paris was smitten with Oriental costumes and mesmerizing decorations made by Russian painters Leon Bakst and Alexandre Benois. Then, Serge Diaghilev, looking for fresh ideas, collaborated with numerous artists, French mainly. Everyone who did not meet his requirements quit Ballets Russes. That’s why the list of Ballets Russes adepts is so long: choreographer Michale Fokine directed the first ballets, then Vaslav Nijinsky replaced him, and Serge Lifar did the same to Nijisky later.

The fame of Ballets Russes went up and down and eventually faded away after Serge Diaghilev’s death in 1929, in Venice, Italy.

Bauhaus is widely known for their iconic design and contributions to the art world, their concepts also extended into dance. Not as well known as...

Kyra Nijinsky was a Russian ballet dancer and the daughter of the famous Vaslav Nijinsky. She was painted by Oswald Birley in 1935 and we are pleased...