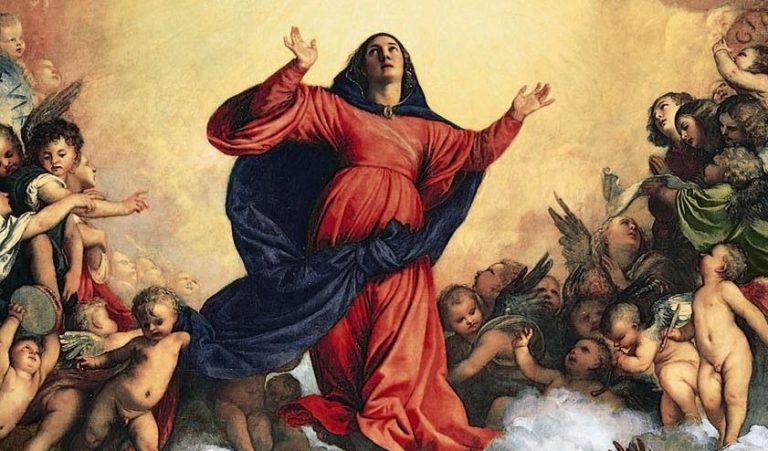 Titian was the most famous painter of the Venetian Renaissance. Even during his lifetime the artist had been acclaimed as the greatest painter of his age and achieved great financial success so that his paintings were affordable only to the wealthiest citizens. His patrons included, among others, the Holy Roman Emperor Charles V and his son Philip II, the Pope, and many Venetian doges. See some of his most well-known paintings.

Although it is now disputed, Jacopo Pesaro being presented by Pope Alexander VI to Saint Peter was considered the artist’s first surviving picture. Jacopo Pesaro, who commissioned the painting, was appointed by Pope Alexander VI as the bishop of Paphos in Cyprus in 1495. The ships in the background remind us of the victory of the combined fleet of the Papal State, Venice, and Spain in the recapture of Santa Maura in 1502, which was by the merit of Jacopo Pesaro.

In the foreground, there is a helmet, which symbolizes victory. While kneeling, Pesaro holds a flag with the coat of arms of the Pesaro family. Saint Peter, a patron saint of Jacopo Pesaro, holds a gospel in his left hand and shows a blessing with his right hand, thus creating a visual triangle with his blessing gesture, the gaze of Jacopo Pesaro and that of the Pope himself. On the left side of the painting, there is a dais with an ancient bas-relief, containing the image of Venus, to whom the island of Paphos was a sacred place since she was blown to it after her birth from the sea in the half–shell.

Titian’s next altarpiece for Jacopo Pesaro was commissioned at the height of his artistic career in 1526, as the patrician Jacopo Pesaro wished to outshine the triptych commissioned earlier by his relative, Giovanni Bellini. The altarpiece took seven years to be completed. The circumstances of the commission made it clear that the picture was going to become a commemoration of the battle of Santa Maura, as well as Sacra Conversazione.

The patron required the picture to be a depiction of the power of the crusading Christian church and a funerary monument with portraits of the members of the family. The final painting included, apart from the Virgin and Child with Saint Peter, Jacopo Pesaro himself, a Turk, a Moor, St. Francis of Assisi, St. Anthony of Padua, and the members of the patron’s family.

3. The Assumption of the Virgin (Assunta)

Titian’s most famous painting is the Assumption of the Virgin (Assunta), commissioned for the Basilica Santa Maria Gloriosa dei Frari to outshine the previous altarpiece, painted by Giovanni Bellini. The Assumption is the painting that established Titian as the most prominent painter of 16th century Venice.

Painted between 1516-1518, it depicts the Virgin Mary standing on the clouds and being surrounded by putti and angels, while God the Father is hovering in the upper part of the picture in the circle that symbolizes eternity. The transition of the Virgin from the Earthly to the heavenly sphere is denoted by the triangle, the base and the apex of which are the two apostles in red and the Virgin herself. According to the legend, the city of Venice was founded on the day of the Annunciation, so the picture may be considered a commemoration of the event, as well as a sacred image for prayer and adoration.

The last years of the artist’s life bore witness to tragic events such as the deaths of his friends, his beloved son Orazio, and misunderstandings with his elder son Pomponio. In the Pieta, which is the artist’s last painting, completed by his assistant Jacopo Palma the Younger, the artist probably depicted himself as the elder St. Jerome, kneeling at the hand of the dead Christ, which was supported by his mother Virgin Mary. Mary Magdalene, standing on the left, is the protagonist of the painting. With her gestures and movements, she indicates that, while choosing her to be the only witness of his resurrection, Christ’s suffering will redeem mankind from Adam’s original sin.

The figures are depicted against a background of an aedicule, with a pediment and seven lamps of the apocalypse on top of it, while in the niche of the aedicule there is a depiction of a pelican, which was associated with the resurrection. The aedicule is flanked by two statues, those of Moses with the Tablet of the Ten Commandments on the left, and of the Sybil, wearing a crown of thorns and holding a cross, on the right. Both of them stand on bases carved with lions, to remind us of the lions of St. Mark, but also of devouring death, as in the Salva Me Psalm, read in masses for the dead. The Pieta was intended to be donated to Santa Maria Gloriosa dei Frari for the artist’s burial chapel.